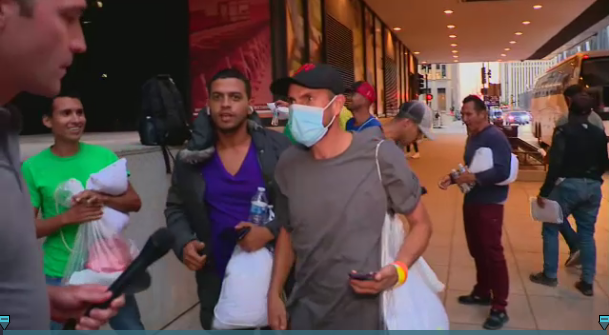 The buses arrived at Chicago’s Union Station at around 7:30 p.m., carrying migrants who crossed the southern border illegally.

An estimated 80 to 100 people were on the buses, including 20 to 30 small children. Many of the migrants said they were from Venezuela.

Chicago is the latest city where migrants have been bused to from Texas, following New York City and Washington, D.C., all of which have Democrat mayors.

Republican Texas Gov. Greg Abbott said in a statement that he looks forward to seeing Chicago Mayor Lori Lightfoot welcome the migrants since Chicago is a sanctuary city.

“President Biden’s inaction at our southern border continues putting the lives of Texans—and Americans—at risk and is overwhelming our communities,” Abbott said. “To continue providing much-needed relief to our small, overrun border towns, Chicago will join fellow sanctuary cities Washington, D.C. and New York City as an additional drop-off location. Mayor Lightfoot loves to tout the responsibility of her city to welcome all regardless of legal status, and I look forward to seeing this responsibility in action as these migrants receive resources from a sanctuary city with the capacity to serve them.”

A statement from Abbott’s office said that Chicago is being added as a “drop-off location” for future migrant buses in response to “President Biden’s open border policies overwhelming border communities in Texas.”

A spokesperson from Chicago Mayor Lori Lightfoot’s office said in a statement that Abbott is “without any shame or humanity.”

“As a city, we are doing everything we can to ensure these immigrants and their families can receive shelter, food, and most importantly protection. This is not new; Chicago welcome hundreds of migrants every year to our city and provides much-needed assistance,” a spokesperson for Lightfoot’s office said. “Unfortunately, Texas Gov. Greg Abbott is without any shame or humanity. But ever since he put these racist practices of expulsion in place, we have been working with our community partners to ready the city to receive these individuals.”

New York City Democrat Mayor Eric Adams, upon meeting the migrants on Aug. 7, said that the actions of Abbott are “horrific.”

“This is horrific when you think about what the governor is doing,” Adams said.

After sending the migrants to New York, Abbott said that the area is an “ideal destination for these migrants.”

“In addition to Washington, D.C., New York City is the ideal destination for these migrants, who can receive the abundance of city services and housing that Mayor Eric Adams has boasted about within the sanctuary city,” said Abbott. “I hope he follows through on his promise of welcoming all migrants with open arms so that our overrun and overwhelmed border towns can find relief.”

Abbott began sending migrants to Democrat-run cities in April, with the first migrant-buses being sent to Washington, D.C.

When the first buses arrived in Washington, D.C., a spokesperson for Mayor Muriel Bowser told ABC News, “Our administration continues to work with NGOs [non-governmental organizations] who are providing resources to the arriving individuals and families. Our partners were able to triage the first bus, which included individuals hoping to settle outside of the region.”

Bowser requested assistance twice from the National Guard to help with the thousands of migrants that have been arriving in the area. Both requests have been rejected.

She first asked the National Guard for help on Aug. 4, then again on Aug. 11, requesting the deployment of 150 National Guard troops to “help prevent a prolonged humanitarian crisis in our nation’s capital resulting from the daily arrival of migrants.”