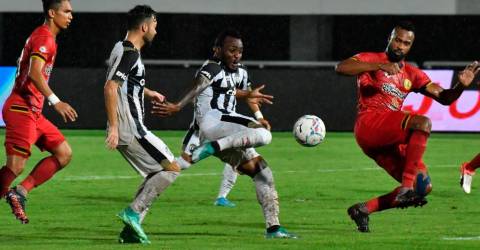 Nafuzi said his squad failed to take advantage of the many opportunities to score a goal, resulting in only one point being collected in a match that ended in a goalless draw.

“It’s a shame that we missed three points, especially after we lost to Penang FC in the previous match.

“Overall, I’m satisfied with the performance of my players despite the heavy rain and having to play on soaked grass,” he said after the Super League match against NSFC at Stadium Sultan Mizan Zainal Abidin here.

Nafuzi said he was also satisfied with the performance of his two imported strikers, Kpah Sherman and Kipre Tchetche who had shown high commitment and determination to assist the team.

Meanwhile, NSFC head coach K. Devan praised the performance of his men who managed to play well throughout the 90 minutes of the game.

He was also satisfied that his squad managed to bring home one point from the match, as the Turtles was among the more formidable teams.

Last night’s draw allowed the Hobin Jang Hobin squad, who is also a newcomer to the Super League this season, to move up one spot to be in the second position with 20 points, while TFC also improved its position from eighth to seventh with 10 points.-Bernama