The lounge at Southend Airport has been ranked the worst out of 21 pay-as-you-go airport lounges in the UK for the second consecutive year.

Inspectors from consumer group Which? say they found barely-there facilities at the Skylife Lounge with no runway view, no hot food and no sparkling wine – earning it just one star out of five.

The best lounges are jointly ranked as the No1 Lounge at Heathrow’s Terminal 3, Heathrow’s The House lounge in Terminal 5 and the 1903 lounge in Manchester’s T3.

The Skylife Lounge at Southend Airport, which has been named the worst UK airport lounge for a second year running by Which? Travel 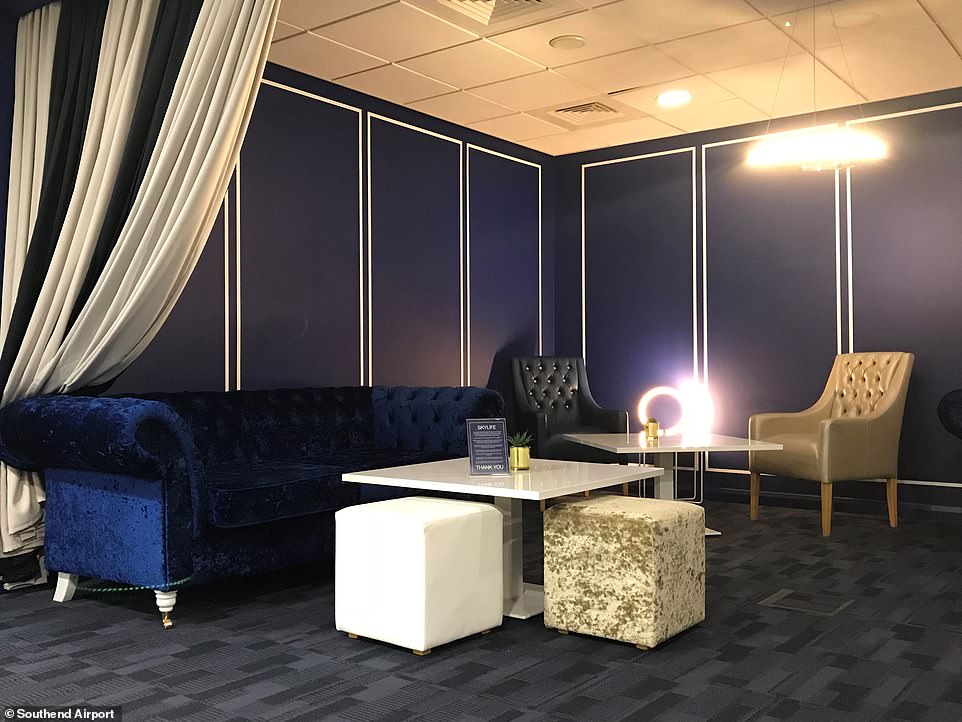 Skylife was criticised for its lack of hot food and its interiors. This is despite the airport being named as the best in Which? Travel’s annual airport survey

The undercover reviewers said the lounge at Southend Airport had ‘stained carpets’ that were ‘dusted with crumbs,’ ‘uncomfortable lurid yellow, low-slung sofas’ and a ‘sad-looking buffet’ of ‘unripe bananas’ and ‘pastries cut into halves’ in the place of hot food options.

The airport itself, however, is rated one of the best in Which? Travel’s annual airport survey – leaving the inspectors wondering if its money should have been redirected.

Access to the lounge costs nearly £20 when booked in advance or £24 for those paying on the day.

The report also found Edinburgh’s Aspire lounge lacking – earning just one and a half stars. 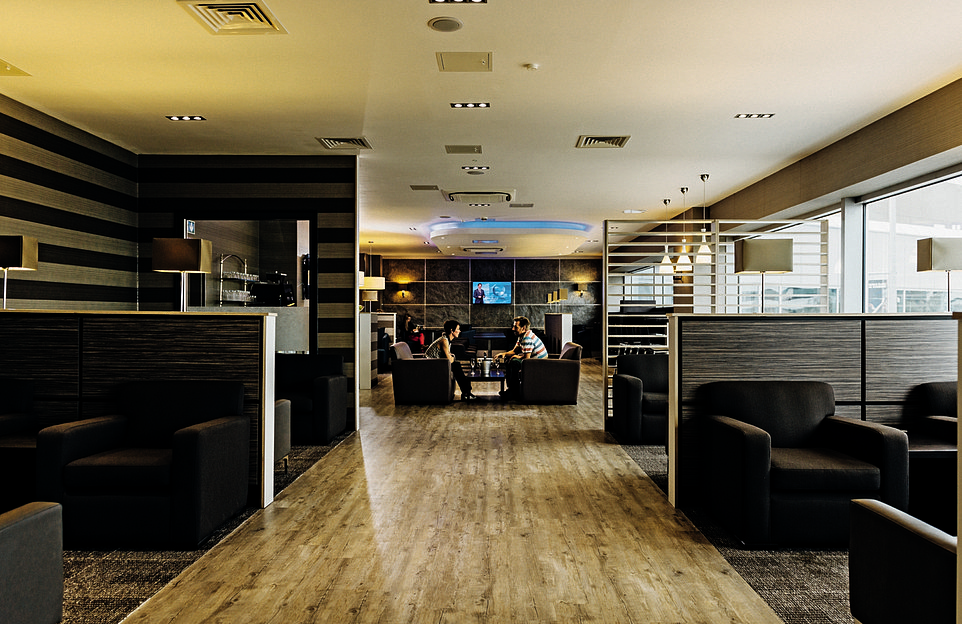 Which? says it found the Aspire lounge at Edinburgh Airport to be lacking and it earns just one and a half stars 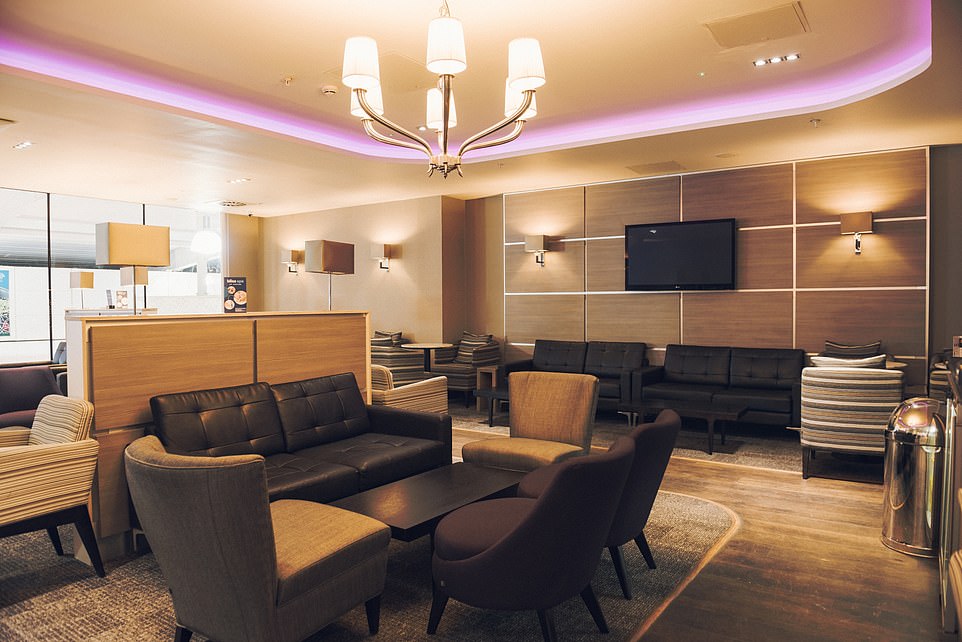 The joint third-worst lounge is the Luton Airport Aspire lounge, which reviewers said served eggs that were ‘congealed’ and ‘stale’ bread rolls

Which? says that while this lounge did include a hot food menu, the inspector described a salad that had ‘a past-its-best tang’, pasta that ‘looked like cat food’ and a glass that was ‘worryingly sticky’.

To make matters worse, the toilet is outside the lounge and halfway across the airport terminal.

The consumer group added that whether better options are available in the airport itself – voted the UK’s worst by passengers for the past three years – will depend on the success of Luton’s multi-million-pound refurbishment. 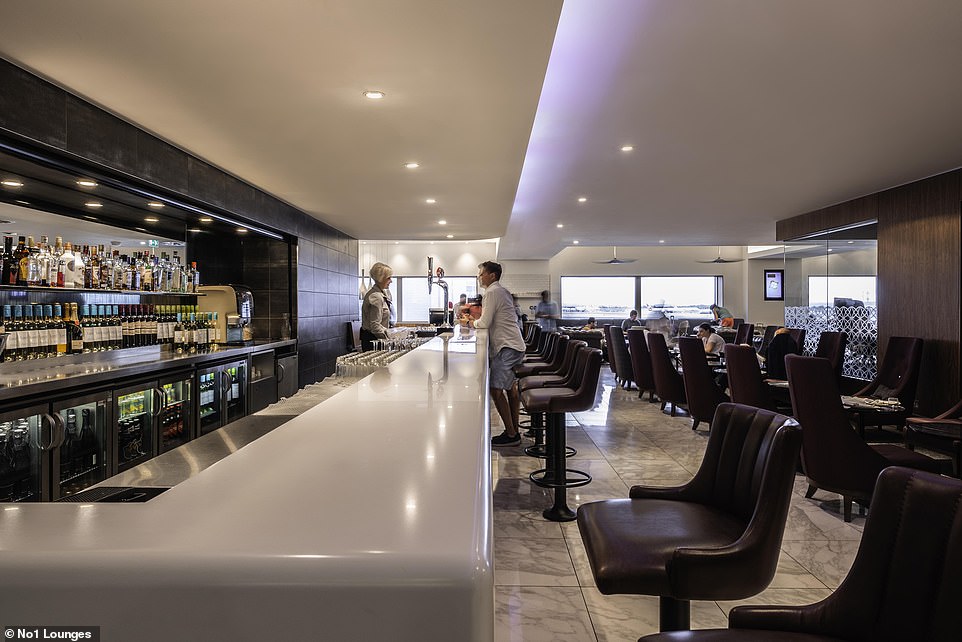 The No1 Lounge at Heathrow’s Terminal 3, which boasts a cinema, free showers, private sleep pods and hot food options made to order 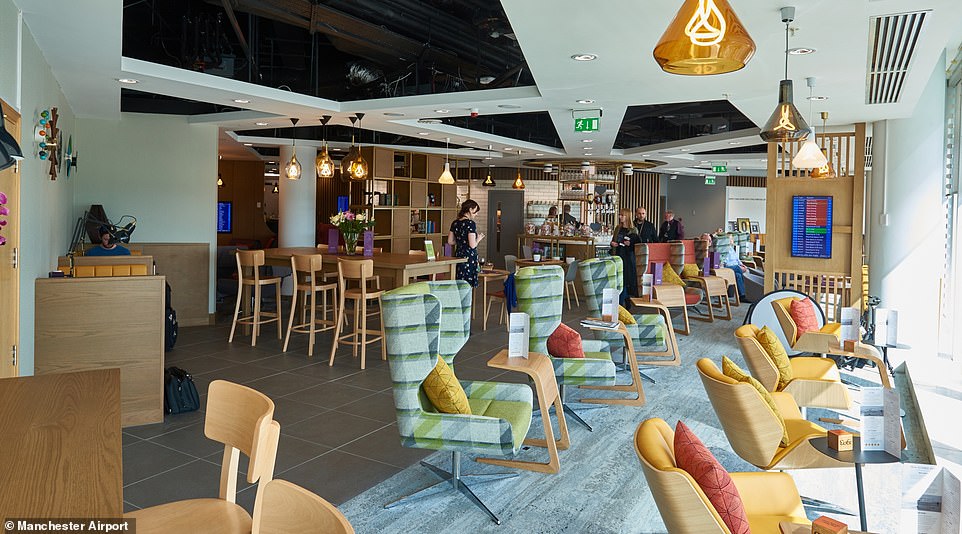 Sharing the accolade for the best UK airport lounge is Manchester’s 1903 Lounge in T3. Reviewers noted the ‘floor to ceiling runway’ view, cheese plates and an ‘immaculate’ self-service bar 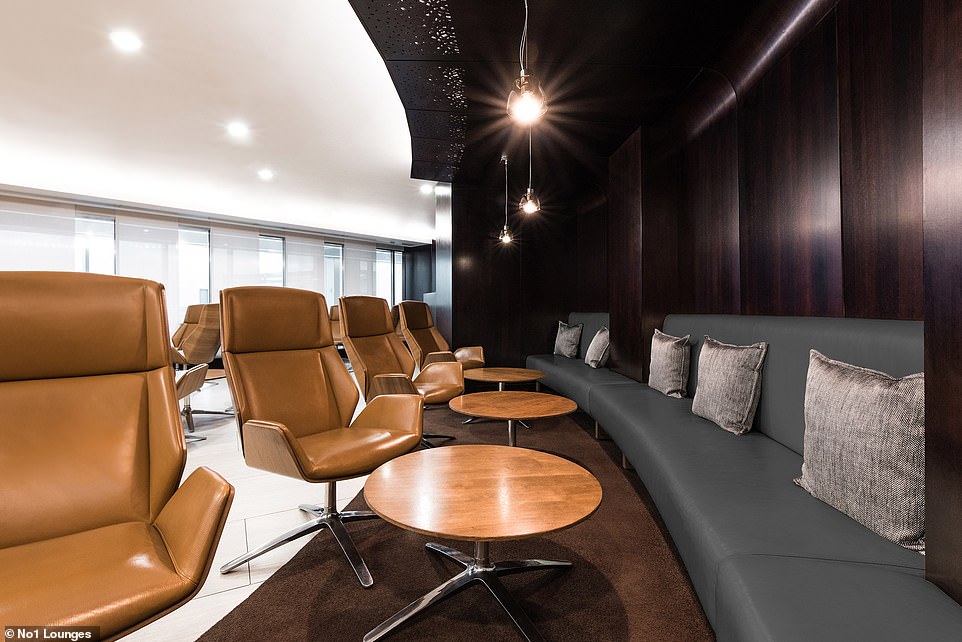 Heathrow’s The House lounge in Terminal 4, pictured, also receives four stars and comes joint top, but the price on the door is £50

However, Which? found that Aspire, which runs 20 pay-as-you-go airport lounges in the UK, has shown some improvement since it last visited, but the report found that its rival, No1, is still delivering a better experience, according to undercover inspectors.

The London airport lounge is described as the best-equipped location Which? inspected. It boasts a cinema, free showers, private sleep pods and hot food options made to order. 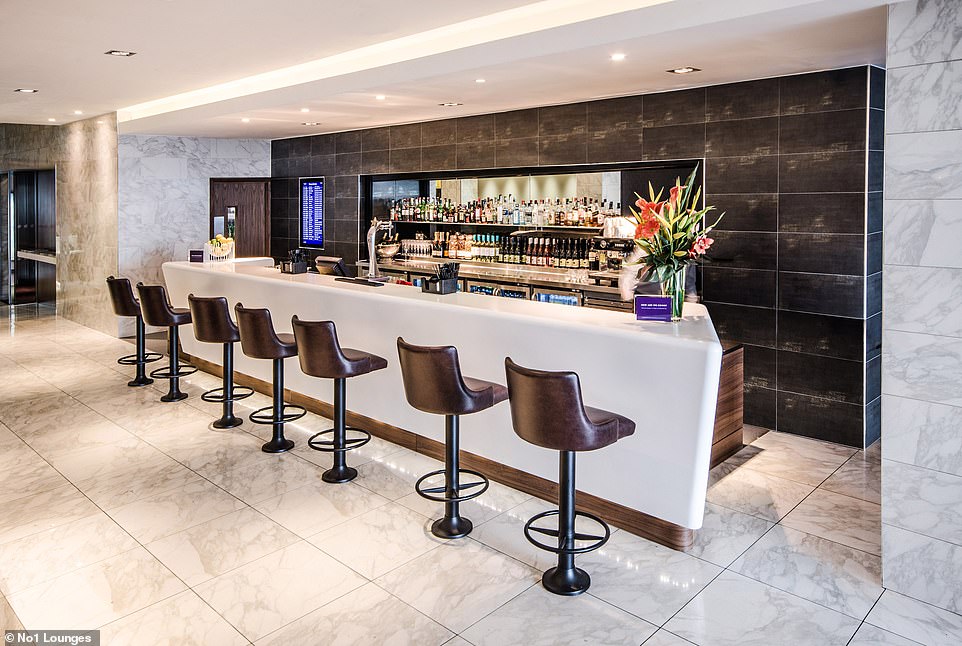 Coming third in the ranking is the No1 Lounge at Birmingham Airport, pictured. No1 Lounges are ranked the best in the survey

According to Which?, the only downside is that in common with all No1 lounges, guests are now limited to only one made-to-order dish per person, knocking down what might have been a five-star review to four.

Jointly top-ranked Manchester T3 1903 was praised for being dotted with model planes and aviator goggles as well as a pick and mix sweet station.

Reviewers noted the ‘floor to ceiling runway’ view, cheese plates and an ‘immaculate’ self-service bar that was found to be ‘well-stocked’.

Made-to-order hot food was available here, too, but limited to just one choice – pork belly on the day Which? visited – earning the lounge another four out of the five-star rating.

Heathrow’s The House lounge in Terminal 4 also receives four stars but the price on the door is £50.

Other highly ranked lounges include the No1 lounge at Birmingham Airport, which was rated third, as well as the Gatwick Clubrooms in both the North and South terminals, which rounded off the top five.

The BA lounge is rated three stars out of five, with food described by Which? inspectors as ‘basic canteen fare’ of penne and tomato sauce and white rice and chilli.

PC and printing facilities, PlayStation and complimentary spa treatments did redeem the lounge somewhat but reviewers claimed it was not the ‘nirvana’ they were expecting and was comparable to its pay-as-you-go counterparts.

The Singapore Airlines lounge, on the other hand, is described as ‘a giant step up’ from the average airport lounge experience.

The cocktail bar, ‘fancy layered desserts’ and rainfall showers made this lounge ‘feel exclusive’ and it earned a coveted four and a half stars. 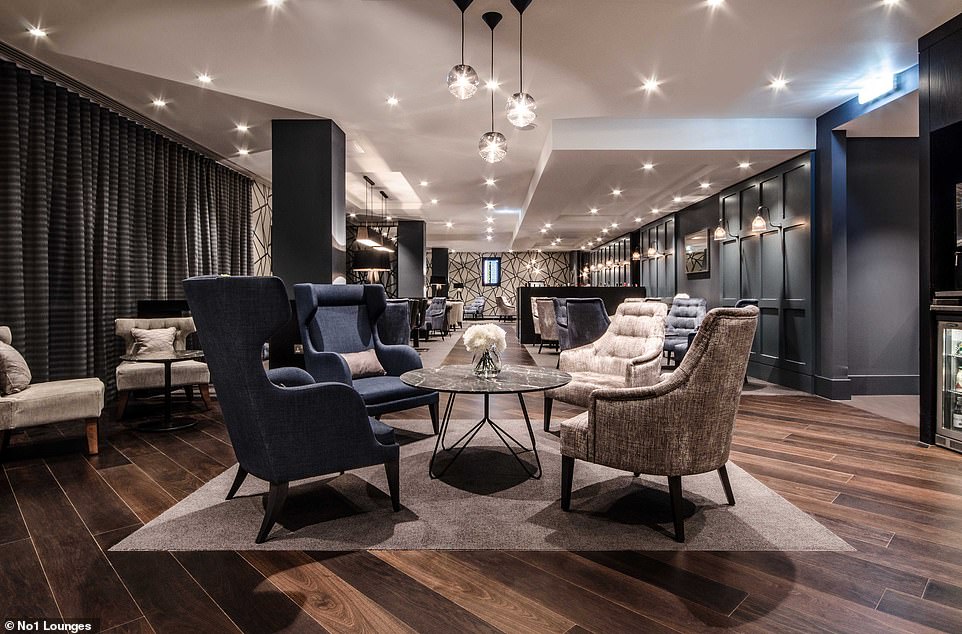 The Clubrooms at Gatwick’s North Terminal gains four and a half stars out of five from the Which? inspectors 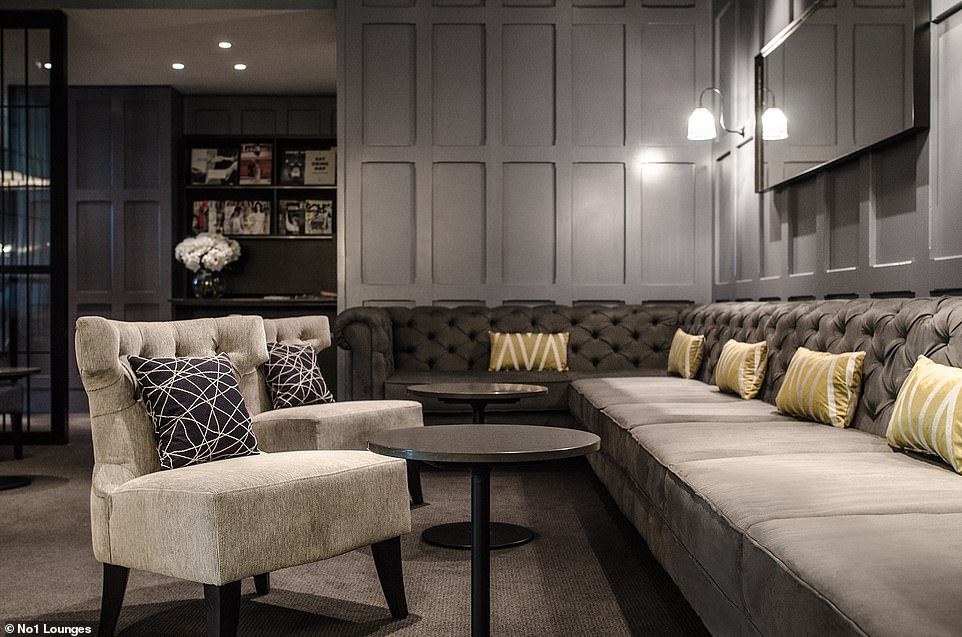 The Gatwick Clubrooms in the South Terminal also fares well in the survey, and it rounds off the top five

It lost a half point because although the food was of restaurant quality, there was no à la carte menu.

Which? Travel editor Rory Boland said: ‘Battling through security queues and the maze that has become duty-free can be such an ordeal – it’s no wonder that the promise of an oasis of calm in a pay-to-enter lounge is so appealing.

‘But with lounges charging up to £50 for what might amount to little more than a seat on a stained sofa and a soggy pastry, passengers might be better off saving their cash to treat themselves once they reach their destination.’

A spokesperson for Southend Airport said: ‘We always welcome feedback on our facilities and we are always seeking ways to improve the experience for our passengers.

‘In the past year, we have worked hard to develop our Skylife lounge and we have seen use by our passengers almost double. Clearly, there is more for us to do, and we look forward to continuing the development of London’s favourite airport.’

A spokesman for Aspire said: ‘Whilst it is encouraging to be recognised for improvement, we are disappointed by some of the findings of the Which? report. Each of the individual comments will be reviewed, and improvements made where appropriate. Aspire Lounges always welcome feedback, both positive and negative, and use it to evolve our offer to better meet the needs of the modern traveller, no matter what the reason for their journey.

‘The vast majority of 28,000 surveyed guests have an extremely positive experience at our lounges, but we are committed to learning from the feedback in the Which? report and making continual improvements.

‘In light of this feedback and in keeping with our seasonal adjustments, we are launching a new hot food menu for Summer 2019, to complement our soups, snacks and treats, which will include dishes such as vegan friendly three bean chili with nacho chips, through to chicken and chorizo pasta.

‘We are committed to improving the stay of each of our guests and have commenced work on a brand-new lounge facility at Edinburgh, which will bring new design elements and toilets within the lounge to guests departing from the airport.

‘It is worth highlighting that there are many great benefits to using an Aspire Lounge in addition to the complimentary foods that we offer, including Free WiFi, a place to work, complimentary drinks, newspapers and above all, a relaxing environment and comfortable seat, which are not always available in the main terminal.’