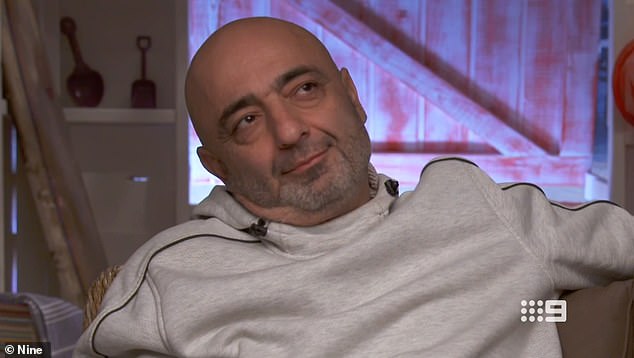 We’re only one week away from the finale episode of The Block, where the five competing teams will put their homes under the hammer at auction.

And on Sunday’s episode, emotions were at an all-time high as they felt the pressure to present a functional and aesthetically pleasing backyard for the final reveal.

Harry, who has often clashed with foremen Dan and Keith throughout the series, came to blows with the tradesmen yet again over a tiling issue.

Drama: Emotions were at an all-time high on Sunday’s episode of The Block, as Harry (pictured) had one last clash with foremen Dan and Keith over a tiling issue

In a piece to camera, Harry said he would have to halt production on their outdoor paving due to budgetary constraints, and recruit tradesmen the following week.

With only hours left until the final reveal in the entire series, a production member told Harry that hiring tradesmen next week is not possible by any means.

It wasn’t long before foremen Dan and Keith entered the scene, with Dan announcing: ‘No one can come back next week, that’s it. Today’s the day.’

A disgruntled Keith said of Harry in a piece to camera: ‘All the shifty stuff that’s been going on has to stop. He’s got no one to blame but himself. If he hasn’t got any money it’s because he hasn’t played the game right.’ 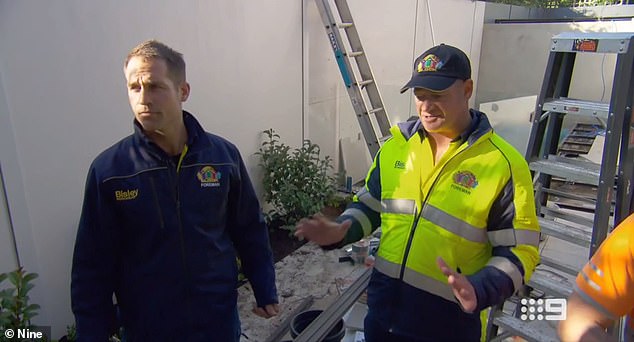 ‘He’s got no one to blame but himself’: Dan (left) and Keith (right) heard that Harry intended on halting production on his outdoor tiling due to budgetary constraints, and hiring tradesmen next week, which is not possible. Keith said Harry ‘hasn’t played the game right’ 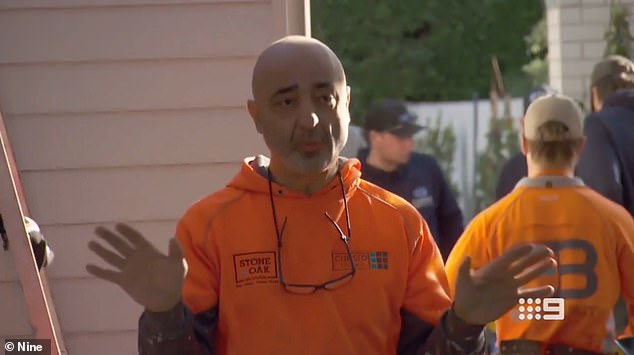 ‘We’re getting as much as we can [get done]’: Harry backtracked, insisting that he never had plans to hire tradesmen next week

Harry backtracked, insisting that he never had plans to hire tradesmen next week.

‘I’m not saying anything, I’m saying whatever we get done, we get done today. We’re going on about it, we’re getting as much as we can [get done].’

However, luck was on Harry’s side with producers allowing an extra hour of manpower that day to finish off the reveals. 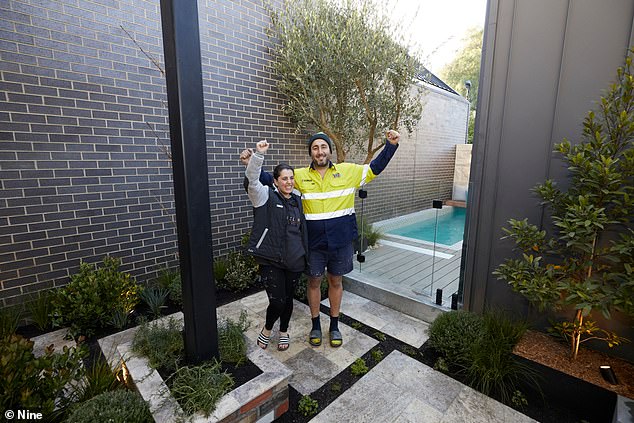 Praise: Meanwhile, it was all positive for competing team Sarah and George (pictured), with the judges in awe of their Japanese maple tree, and the pool area which could work as a ‘magazine cover’, during their backyard reveal

When it came to their reveal, judge Neale Whitaker commended Harry and his daughter Tash for producing a space that was ‘very simple, pared-back minimalism’.

However, fellow judges Shaynna Blaze and Darren Palmer were left confused by the installation of a large white wall between the front and back garden.

It was all positive for competing team Sarah and George, with the judges in awe of the Japanese maple tree, and the pool area which could work as a ‘magazine cover’. 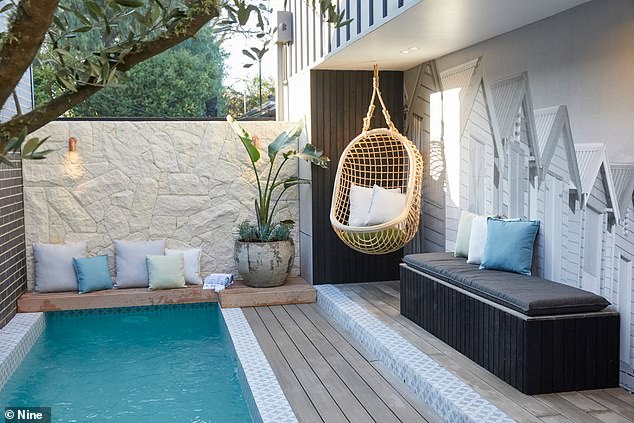 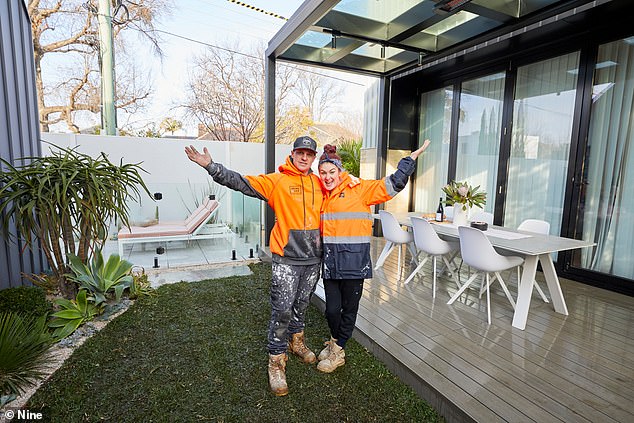 Top honour: While Sarah and George won the reveal on 30 points, Jimmy and Tam (pictured) placed first on the ‘Super Power’ leader board, earning themselves a Domayne magazine cover and first choice on the auction order next Sunday

The judges were also blown away by Luke and Jasmin’s ‘Instagram-worthy’ backyard, taking pleasure in the day bed and the outdoor pizza oven set-up.

After judging Jimmy and Tam’s backyard, Darren branded the 2020 season of The Block, the ‘best’ ever.

Neale added: ‘It’s The Block none of us will ever forget.’ 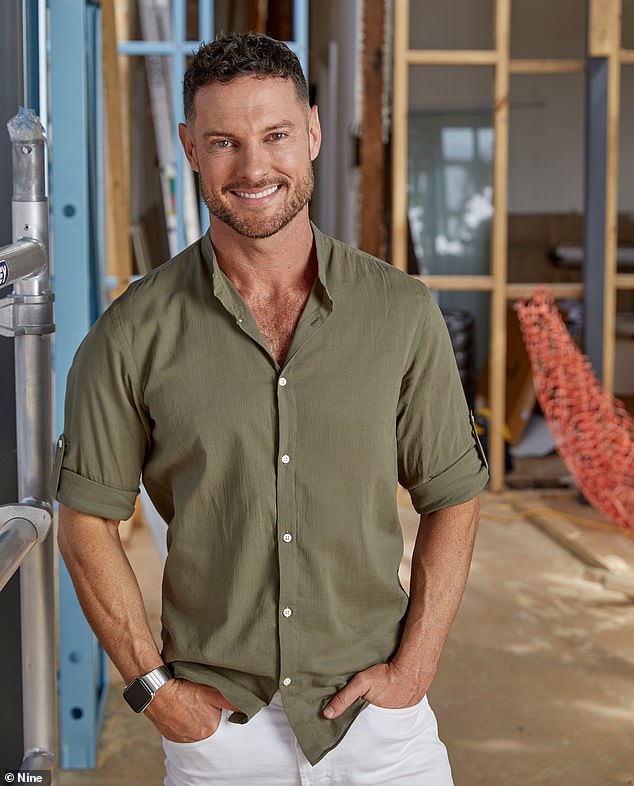 History-making season: After Jimmy and Tam’s reveal, judge Darren Palmer (pictured) branded the 2020 season of The Block, the ‘best’ ever. ‘I think we’ve not only seen the best Block ever, but we’ve probably seen the best contestants ever,’ he said

The winning reveal went to Sarah and George on 30 points, followed by Luke and Jasmin on 29-and-a-half, Jimmy and Tam on 27-and-a-half, Daniel and Jade on 24, and Harry and Tash on 22-and-a-half.

However, it was the ‘Super Power’ leader board that had the most influence, with the winning team not only scoring a Domayne magazine cover but also getting to decide the auction order next week. 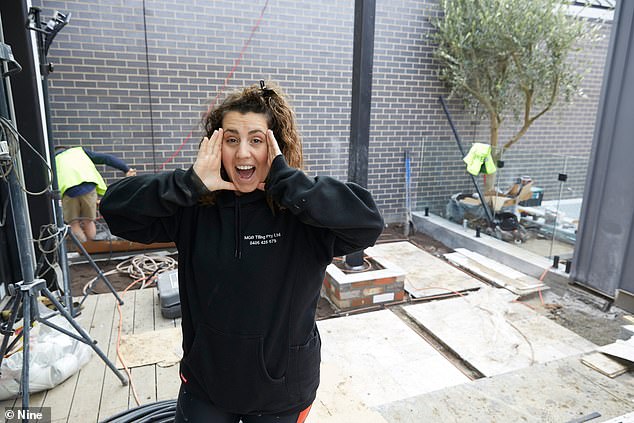 Ecstatic: Sarah (pictured) could not believe her and George’s luck at having won a Ford Puma in this week’s reveal