Amid the many extraordinary moments in that febrile election campaign, one will stand out for years to come.

It was the last Labour rally on Wednesday evening, and Party supporters had gathered to cheer Jeremy Corbyn.

Across the road, activists protesting against the anti-Semitism that had sunk deep into Labour — both Jews and Gentiles — had unravelled a banner that read ‘Never Corbyn’.

People were furious that politicians had promised Brexit and failed to deliver on this pledge; Corbyn’s fudge on the subject fooled no one. Second: People simply didn’t like Corbyn. He is pictured after the party’s election defeat

The massed Corbynites jeered and chanted at them: ‘From the river to the sea, Palestine will be free.’

Those are the words of Hamas, the terrorist organisation once described by Corbyn as his ‘friends’, in its call for the eradication of the state of Israel and the extermination of its people.

Supporters of the Labour Party thus taunted their Jewish fellow citizens and implicitly threatened them with genocide — on British streets.

How on earth could this be happening in the United Kingdom in the 21st century?

If ever one needed a harrowing symbol of the depths to which Labour has sunk under Corbyn — and an explanation for why the public in its wisdom so emphatically rejected his toxic doctrine on Thursday, this would surely be it. 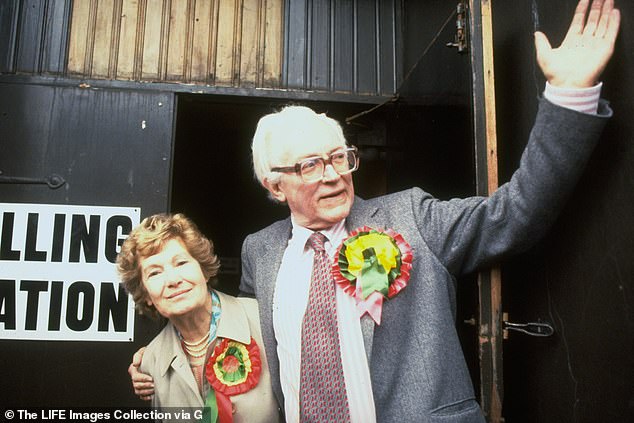 Michael Foot’s 1983 mission statement was dubbed ‘the longest suicide note in history’. Labour’s 2019 version was several times longer. Mr Foot is pictured with wife Jill walking out of a polling station in the 1980s

The Corbyn experiment, indeed, has done nothing so much as pollute a party that has a proud record of fighting racism.

‘A kinder, gentler politics’ was Corbyn’s meek slogan when he began his leadership in 2015.

But on his watch, Labour become a cesspit of hatred, class warfare and, yes, anti-Semitism.

Anyone who understands the thinking of the hard-Left — or who has studied it for as long as I have — knows that this was not some unpredictable accident.

Instead, the outcome was obvious from the start.

Less than a month after Corbyn unexpectedly became Labour leader — an event met with horror, it must be said, by most of his parliamentary colleagues — his goons formed Momentum, a Praetorian guard devoted to safeguarding the interests and position of the hard-Left, cementing its seizure of the Party and evicting all moderates from its ranks. 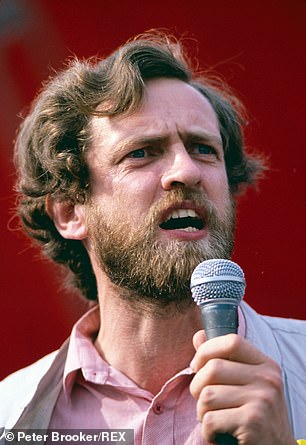 Put three Trotskyites in room, the joke goes, and within an hour you will have two new parties and a breakaway faction. Corbyn (pictured above in 1984) has overseen a truce within Labour between different hard-Left groups

Swathes of them were forced out or left in disgust. Others were outvoted or bullied off committees. Party rules and conference procedures were changed to close out dissenting voices.

At every step, doors through which traditional Labour centrists might take back the Party were slammed shut and bolted.

Eventually, earlier this year, even the deputy leader, Tom Watson, felt forced to step down. He recognised that the pragmatic, market-friendly, technocratic strand of Labour thinking embodied in Tony Blair — who, after all, won three elections — had no place in Corbyn’s Party.

Yet, for the wider public, it took time for the true nature of Corbyn, his beliefs and the gang with whom he surrounded himself to become obvious.

His rapturous reception at the Glastonbury festival in 2017 was more a measure of the hopes vested in him by the young than a reflection of his true character.

A generation that could not remember the Troubles in Northern Ireland did not appreciate the terrible significance of his fawning support for the IRA.

His Shadow Chancellor John McDonnell and Shadow Home Secretary Diane Abbott’s call for the disarming of the police and the abolition of MI5 took on a profound resonance in the context of Islamist terror, crystallised by the recent attack on London Bridge.

Eventually, people began to doubt that Labour could, or was even committed to, keeping the streets of Britain safe.

That was the backdrop against which Labour’s frankly ludicrous and dangerous manifesto was announced.

Roman emperors, it is said, pacified their restive populations with promises of ‘bread and circuses’. As this year’s General Election campaign progressed, Labour tried the same approach. 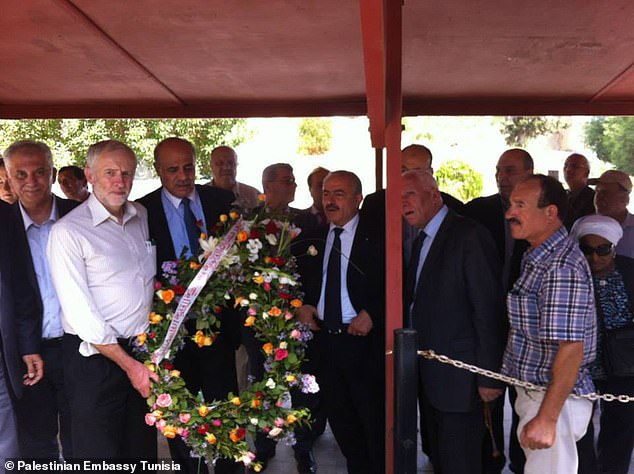 Each new offer, more fantastic than the last, eroded the believability of the previous one.

The eye-watering billions needed for mass nationalisation simply didn’t seem credible. The announcement that everyone would work only a four-day week without the economy suffering was met with utter disbelief.

Labour’s manifesto was the work of juvenile student revolutionaries rather than sensible adults ready for power.

On the doorstep, the verdict was damning. A friend who has been canvassing in working-class areas in Labour cities and towns around the country tells me that two issues came up constantly.

First: People were furious that politicians had promised Brexit and failed to deliver on this pledge; Corbyn’s fudge on the subject fooled no one. Second: People simply didn’t like Corbyn.

If the Party leadership had listened to ordinary voters instead of simply talking to itself and like-minded supporters, it might have avoided this rout.

What, then, will become of Labour? It should be stressed that the Party of Clement Attlee and of Tony Blair has been lost, possibly forever.

There will now be a vicious battle for the future leadership and control of the Party, but this will probably not be between the Left and the centre, as it was after Foot was obliterated a generation ago, and which led to the rise of Blair.

The new fight is just as likely to be between rival factions on the far-Left. Yesterday, Labour’s departing leader was asked whether Corbynism is dead.

He is seen by his hard-Left cohort as simply the figurehead of a movement, which will continue after him; if necessary, in perpetuity.

The British Left has always been marked by infighting. In the past 100 years, more than a hundred groups of Marxists, Trotskyites, Leninists and Stalinists have sprung up here, fracturing, splitting and backstabbing each other — often over trivial disagreements about doctrine or policy.

Put three Trotskyites in room, the joke goes, and within an hour you will have two new parties and a breakaway faction.

Corbyn has overseen a truce within Labour between different hard-Left groups. Where infighting has surfaced — such as between members of John McDonnell’s Labour Representation Committee and those around Corbyn — it has been largely unnoticed.

Corbyn’s spin doctor, the former Guardian journalist Seumas Milne, and the ex-Communist Andrew Murray both have origins in the Stalinist wing of the Left.

John McDonnell’s faction, by contrast, is Trotskyite (the bitter distinction between these groups need not concern us here — suffice it to say they despise each other).

It remains to be seen if that tribalism sets the rules for the coming fight. For now, Labour lies mortally wounded. The best thing would be for it to start afresh as a moderate, broad-church party of opposition — something that is important in any democracy.

Instead, however, the remnant will carry on, no matter how small they become and how many times the electorate rejects them. 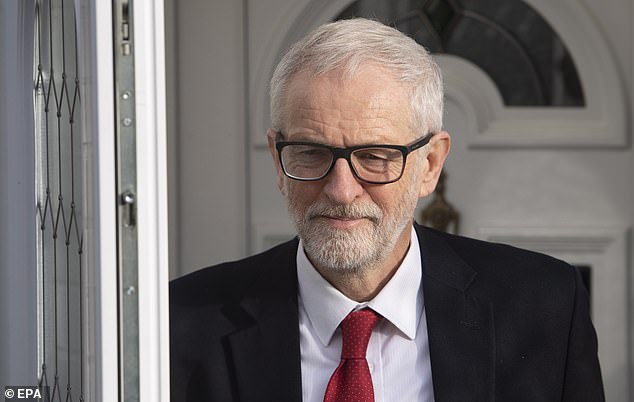 The eye-watering billions needed for mass nationalisation simply didn’t seem credible. The announcement that everyone would work only a four-day week without the economy suffering was met with utter disbelief

For many of them, losing scarcely matters: being right is more important. Indeed, some of Corbyn’s supporters are now spinning this catastrophe as a success.

‘Doublethink,’ wrote George Orwell in Nineteen Eighty-Four, ‘means the power of holding two contradictory beliefs in one’s mind simultaneously, and accepting both of them.’

The Corbyn remnant is now immersed in doublethink.

They will not moderate their extreme political ideas just because the electorate has dismissed them.

They will blame their defeat on a hostile capitalist media, smears and lies, Brexit, the anti-democratic billionaires of Bassetlaw, Blyth Valley and Bolsover — anything but the obvious.

Holier-than-thou Lefties have spent months telling traditional Labour supporters who didn’t like what they had done to their party to ‘F*** off and join the Tories’.

Millions, it seems, did just that.

Giles Udy is the author of Labour And The Gulag: Russia And The Seduction Of The British Left (Biteback).