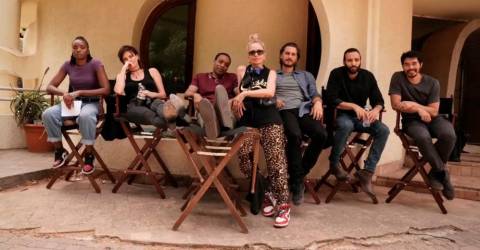 THE world has just gotten its first look at our very own Henry Golding on the set of The Old Guard 2, in a newly-released behind-the-scenes photograph.

Less than two weeks ago, Golding was announced to have joined the upcoming sequel to the hit 2020 Netflix original action film about a group of immortal warriors who must fight for their survival once their existence is discovered.

The film features a star-studded cast, including Charlize Theron, KiKi Layne, Matthias Schoenaerts, Marwan Kenzari, Luca Marinelli, Veronica Ngo and Chiwetel Ejiofor, who are all reprising their roles from the first film, which is based on a graphic novel series written by Greg Rucka and illustrated by Leandro Fernando.

Filming for the sequel began in earnest last week in Rome, Italy, with director Victoria Mahoney sharing a photo showing the outdoor set on the first day of production.

Early this morning, the film’s star and executive producer Theron shared two photographs on her social media accounts, showing a majority of the cast, including Golding, posing with Mahoney.

In the caption, Theron wrote: “Let’s go to work”, possibly as a throwback to a line her character said in the first film, as well as to celebrate the start of the film’s production.

While there is still no mention of what Golding’s role will be, fans have been speculating that he will be playing FBI agent Mustafa ‘Moose’ King, a romantic interest for Layne’s character Nile.