Robbie Williams was at a film screening while the youngest members of his family – Teddy, seven, Charlie, five, and baby Coco – were all happily asleep at home. Hollywood composer David Arnold collared the star. ‘Hey, Robbie, you’ve got children, haven’t you? How many times have you read them The Tiger Who Came To Tea?’

‘About a thousand,’ replied the singer. ‘Why?’

Sophie with the tiger in Judith Kerr’s The Tiger Who Came To Tea. It’s a children’s classic about a greedy tiger who comes to tea with a little girl called Sophie

Arnold is best known as the Grammy-winning creator of five James Bond scores and the man who writes the music for BBC1’s Sherlock. But he’d just said yes to his first animation, the children’s classic about a greedy tiger who comes to tea with a little girl called Sophie.

His song Hey Tiger! had been inspired by the big band swing sounds of the Sixties and he already had Robbie in mind as the singer. For him to have bumped into Williams felt like fate. ‘I had the music on my phone,’ says Arnold. ‘So I started playing it and handed the phone to him. He held it up to his ear and listened. Then he said, “I’ll do it.” ’ And that’s how Williams joined the stellar cast set to catapult The Tiger Who Came To Tea to the top of the Christmas schedule.

Benedict Cumberbatch is Daddy, Tamsin Greig is Mummy and the velvet voice of David Oyelowo is the greedy tiger. David Walliams, a friend of the book’s late author Judith Kerr, is the narrator and Paul Whitehouse has a cor blimey turn as the milkman. Seven-year-old newcomer Clara Ross is Sophie.

An animation is now as much of a festive TV tradition as the Queen’s Speech and a 007 outing. Lupus Films, the company bringing The Tiger Who Came To Tea to the screen, were also responsible for turning We’re Going On A Bear Hunt into the heart-warming hit of 2016 and making 2012’s The Snowman And The Snowdog, the follow-up to Raymond Briggs’s The Snowman. 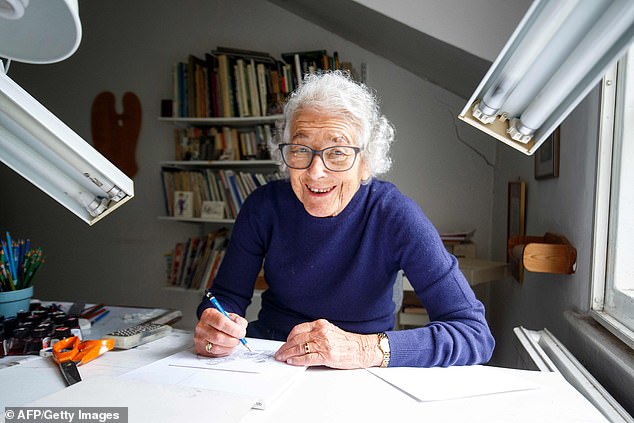 The late children’s author Judith Kerr. The author attributed her energy to having a Martini Rosso on the rocks every lunchtime

This time, though, director Robin Shaw and executive producer Ruth Fielding have taken custody of a story from their own childhoods. Published in 1968, Tiger has sold five million copies and has never been out of print. It is, as David Walliams says, ‘a stone-cold classic’.

It opens with Sophie and Mummy baking on a rainy day – with biscuits, buns and a sponge cake emerging from the oven in time for tea. As they sit down with their best china, a huge tiger knocks on the door and asks to join them. ‘I’ll just get another plate’, says Mummy stoically.

Their glint-toothed guest chomps, gnashes, slops and gurgles his way through everything on the table. Soon he’s rampaging around the kitchen, eating a week’s worth of groceries and that night’s dinner, drinking the taps dry of water, not to mention all the milk and a couple of bottles of Daddy’s beer. And then, as suddenly as he arrived, he disappears into the night.

Such a surreal story has invited half a century of literary analysis. Since Kerr was the daughter of a Jewish family who fled Hitler’s Berlin, the book has been interpreted as a fable about the Nazi invasion, although Kerr always denied this. Newsnight presenter Emily Maitlis once asked her if ‘the tiger symbolised the Sixties sexual revolution, where normal mores and suburban life became upended by this wild and exotic creature?’ Maitlis says: ‘She told me “no, it was just about a tiger coming to tea.”’

And that, with its abiding sense of wonderment and fun, is the story Lupus Films is telling this Christmas. ‘I think,’ says Shaw, ‘it’s really a book about how to treat guests, even ones who eat you out of house and home. There’s no theme, no emotional crisis, no moral. The doorbell rings, it’s a tiger. He eats everyone’s food and he goes. Then Daddy comes home. For Sophie it’s all building up to going out for sausage and chips in your pyjamas and who doesn’t want to do that?’

The project, three years in the making, began with Fielding working out how to persuade Kerr to agree. The author was in her 90s but had never retired – she attributed her energy to having a Martini Rosso on the rocks every lunchtime. Fielding had a hunch she’d love what Lupus had done with We’re Going On A Bear Hunt and invited her to the premiere.

‘That was our currency,’ says Fielding. ‘It was a no-brainer.’ Her instincts were correct. Kerr was impressed by what she saw and also by the viewing figures: it would become the most-watched Channel 4 programme of 2016, with an audience of eight million.

Kerr agreed but wished to collaborate on the script, the design and the casting to ensure it remained true to her original. 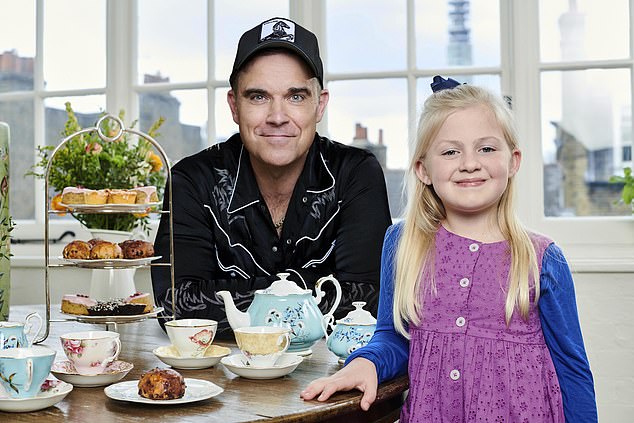 Robbie Williams, who sings the theme tune to The Tiger Who Came To Tea with Clara Ross, who voices Sophie

Lupus Films’ first and greatest challenge was making the slim volume long enough for a 25-minute broadcast. Shaw was handling a film in which the main character – the tiger – appeared three-quarters of the time but had only four lines of his own. As Oyelowo, who voices the animal, points out, he’s ‘a cat of few words because he’s too busy eating’.

Early attempts to write in more words were met with disapproval by Kerr. ‘She told us the simplicity is what gives this book its talismanic quality,’ says Fielding. ‘Above all she wanted the tiger to remain an enigmatic character.’

Instead, the film now has a fantasy sequence in which Sophie imagines what her life would be like if the tiger stayed for good, accompanying her to school and on trips to the seaside. Kerr adored this addition, the only one she had ever permitted. Robbie Williams’s rendition of Hey Tiger!, with its seize the day message ‘Put on your smile and let the fun begin, today won’t come around again’, is the soundtrack to this part.

Kerr’s artwork would also pose a problem. Her deceptively simple pictures – sketched when visiting the tigers at London Zoo – appear in the book against stark white backgrounds. This creates the book’s signature look but it’s not one that translates easily on to TV. Lupus also had to find digital ways of recreating Kerr’s hand-drawn pictures and ensure their idiosyncrasies, down to the tiny crosses on Sophie’s cupcakes, found their way onto film. In total, the 75-strong team spent 55,000 hours drawing the frames needed to animate the book.

No detail proved too small for Kerr. When Shaw drew a daytime version of a high street she had pictured only at night, she helped him design the shopfronts, right down to specifying which blooms should be on sale in the florist (she settled on hydrangeas).

Sadly, the author did not live to see any of this finished: she died in May, aged 95. What she’s left behind is a film that, with its sense of fun and optimism, its Sixties colour schemes zinging off the screen and a tiger who remains as greedy and mysterious as ever, is a new Christmas classic.

The final scenes depict Sophie in wellies with a coat over her nightie heading for tea in a cafe. Daddy is taking the family out since the tiger has eaten every last crumb. As Sophie skips along the street telling Daddy about their uninvited guest, a distinctively striped ginger cat appears in the shadows behind them. They are too busy to notice him. But we do, a small furry symbol of the power of imagination.