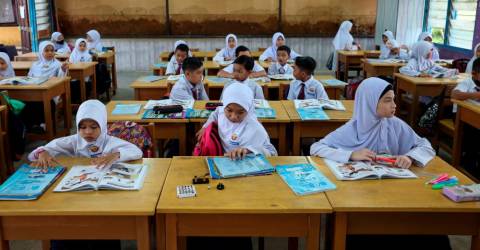 KUALA TERENGGANU: The third term of school session in Terengganu which began today went smoothly, and no schools were closed due to the floods including in the badly-affected districts, namely Besut and Kemaman.

State Education Department director Abdul Muie Ngah said the clean-up works had been done quickly and well with the cooperation of the school administration, local community and non-governmental organisations.

“The number of students affected is 5,386, but according to information from the District Education Offices, all students were able to return to school,” he said after a visit to Sekolah Kebangsaan Pulau Rusa here, which was also affected by the recent floods.

Abdul Muie said that even though many things were damaged in the flooding, such as desks and chairs, the state education department was able to overcome the problem based on past experience.

However, he said the department is still evaluating the situation and has yet to determine the losses caused by the disaster.

“To replace the damaged furniture, we brought excess inventory from other schools. What is important is that students can start their school sessions.

“If they don’t have any school uniform, students can wear whatever decent clothes available for the time being,” he said.

On Dec 18, Terengganu was hit by a massive flood that caused more than 40,000 to be evacuated to relief centres in eight districts.-Bernama