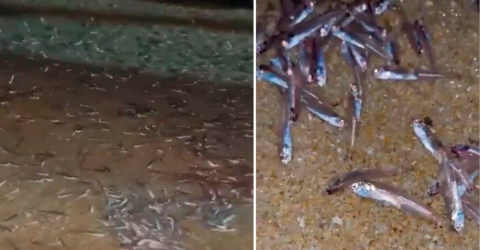 IPOH: Perak Fisheries Department will monitor the phenomenon involving thousands of anchovies leaping out of the waters onto Pasir Bogak beach from time to time.

Its director Noraishah Hashim said the incident occurred at 7.30 pm on Saturday following an incident on Friday where a small quantity of silver-type round herring fries was also found stranded on the beach.

She said many residents and visitors took the opportunity to collect the anchovies between 11 am and 1 pm yesterday, adding that investigations found that the rare incident only happened at Pasir Bogak beach.

She said fishermen and vessel owners informed the department that their anchovy catch has increased several days before the phenomenon occurred.

Noraishah said the department is of the opinion that the rezoning of fishing areas on the west coast of Peninsular Malaysia in 2016 that created a conservation zone for fish breeding has shown success by increasing the number of anchovy in the area. – Bernama