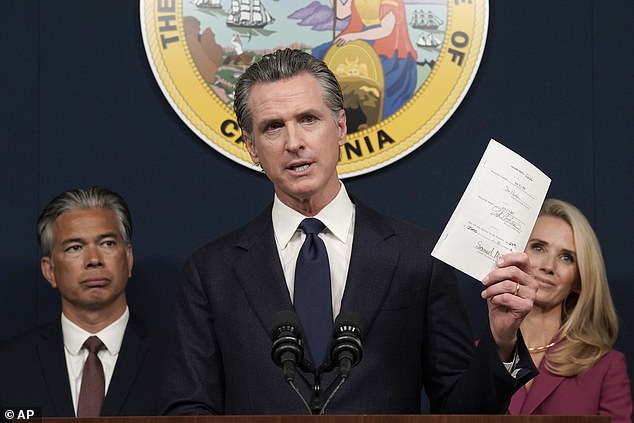 Three of America’s most influential Democratic governors are speaking to potential donors and staff about a 2024 presidential bid, according to a report – but will only run if President Joe Biden doesn’t seek re-election.

The leaders of California, Illinois and New Jersey are all eyeing the White House, Reuters reported on Friday.

And, while California’s Gavin Newsom has long been rumored to be interested, the addition of Illinois’s J.B. Pritzker and Phil Murphy of New Jersey comes as something more of a surprise.

Donald Trump on Thursday night all-but declared he was running, telling a rally in Iowa: ‘In order to make our country successful and safe and glorious, I will very, very, very probably do it again. Very, very, very, probably.’

Trump is expected to announce a third White House campaign soon after the midterms, The New York Times reported on Friday – possibly as soon as the week of November 14.

Gavin Newsom, the governor of California, is widely believed to hold presidential ambitions 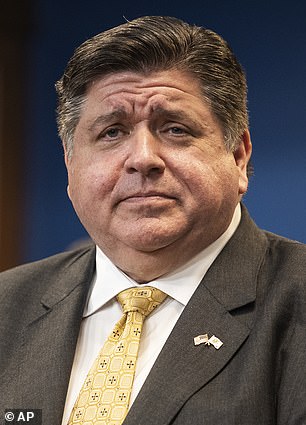 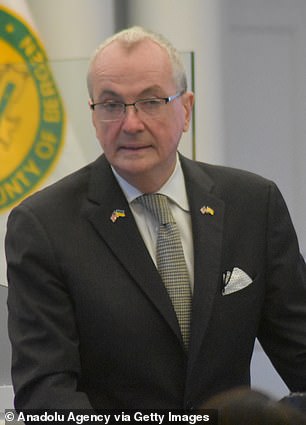 Newsom, 55, was mayor of San Francisco before becoming governor of California in 2019, and is currently seeking a second term – a race he is expected to easily win.

On Saturday, he was adamant he wasn’t interested in the White House.

‘It’s not my ambition,’ he told CBS News. ‘It’s not the direction that I’m leaning into. It’s not the moment.’

When pressed on whether he could say he will never run for president, Newsom said: ‘Yeah, I have no interest.’

Pritzker, the 57-year-old member of the billionaire Hyatt hotel-owning family consistently named one of America’s richest, was elected governor of Illinois at the same time as Newsom took California.

A businessman, he entered politics as the national co-chair of Hillary Clinton’s 2008 campaign and used it as a springboard to his election as governor.

This summer he delivered speeches in the crucial states of New Hampshire and Florida, in what many saw as an attempt to test the waters.

Yet Illinois voters are not keen on a Pritzker presidency: two-thirds said he should not run, with another 21 percent saying they were not sure.

Only 13 percent embraced the idea of Pritzker trying to become the second Illinoisan in the past four presidential elections to sit in the Oval Office, according to a WBEZ/Sun Times poll.

Murphy, 65, a multimillionaire financier who spent 23 years at Goldman Sachs, was elected in January 2018.

He was Barack Obama’s ambassador to Germany before becoming governor.

When asked specifically if he would jump into the Democratic primary if Biden doesn’t, Murphy was less adamant.

‘Listen, based on everything I’m hearing, he’s running again,’ the governor said of Biden. ‘So it’s a theoretical question. I’m not being disrespectful to you, but I don’t think it’s gonna happen.’

Biden, 79, continues to insist that he will seek a second term: on November 20 he will become the first 80-year-old U.S. commander in chief. 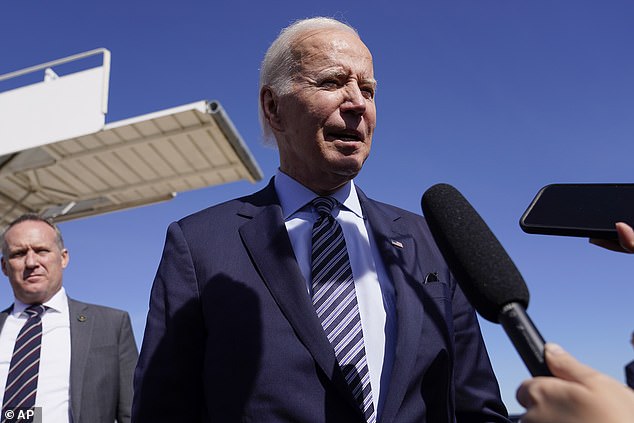 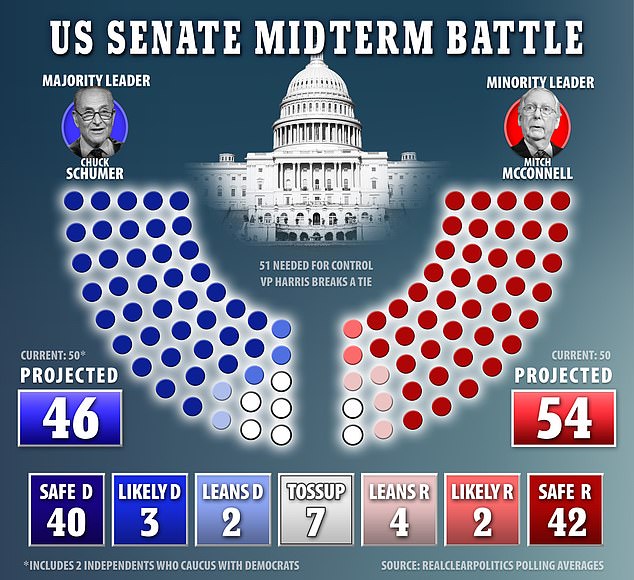 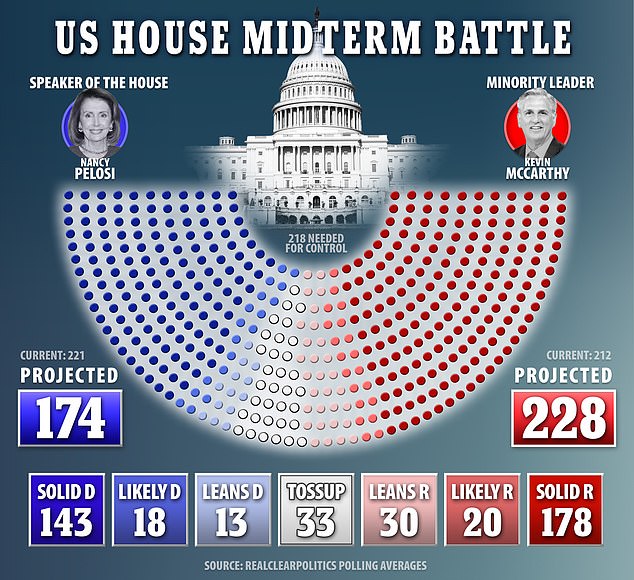 If he were to win again, Biden, who already holds the distinction of being the oldest president elected, would be 82 when he takes the oath of office a second time and 86 on his successor’s Inauguration Day.

Prior to Biden, the oldest man elected president was Ronald Reagan at the age of 69.

Biden himself has insisted he intends to run for a second term, and last month Politico reported that discussions would begin in earnest after the midterms, with the First Lady, Jill Biden, playing a key role.

A campaign would be launched in early 2023, the site said.

Reuters on Friday reported that, if Biden choses not to run, his vice-president Kamala Harris would be the preferred candidate among Democrat aides.

Yet The Los Angeles Times, which is tracking California-born Harris’ approval ratings, reports that the latest polls, from October 3, show her to be significantly less popular than any of her four predecessors, at the same point in their terms. 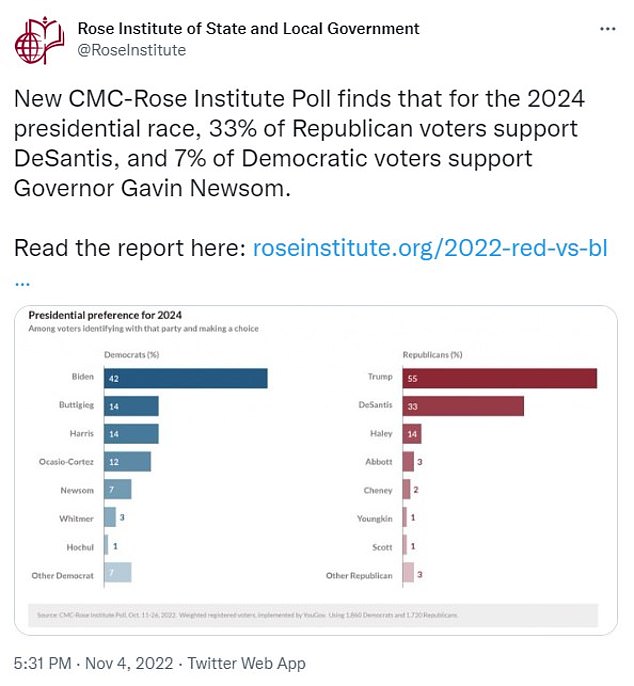 On Friday the Rose Institute, a California-based polling company, reported that 42 percent of registered Democrats want Biden to run again. Pete Buttigieg, the Transport Secretary, was tied with Harris for second choice, with 14 percent selecting them.

Newsom was fifth, behind Alexandria Ocasio-Cortez.

Pritzker and Murphy were not mentioned.