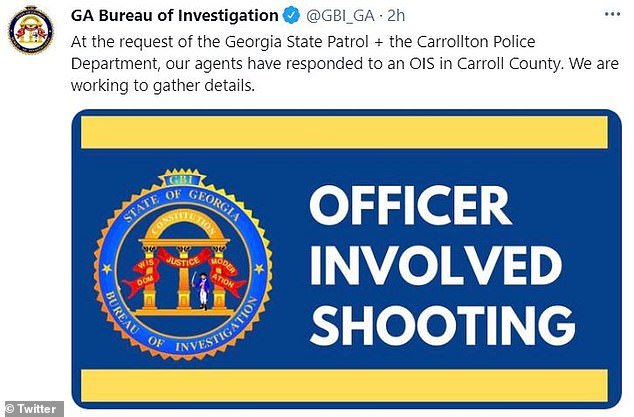 BREAKING NEWS: Three officers are wounded after shootout with gunman who led police on high speed chase in Georgia

By Ariel Zilber For Dailymail.com and Associated Press

Three law enforcement officers were injured during a police chase that ended in a shooting in Georgia Monday morning, authorities said.

At least two of the officers were wounded by gunfire and a third was injured though the reason was unclear as of early Monday morning, WXIA-TV reported.

One of the three injured officers was airlifted to an Atlanta hospital.

It’s unclear how many officers were injured and Hulsey said she was not aware of the officers’ conditions.

The Georgia Bureau of Investigation on

Police activity is blocking the area. Drivers will need to take Ga. 113 or Liberty Road to get around the closures.

The Georgia Bureau of Investigation was at the scene assisting the State Patrol and the Carrollton Police Department in an investigation.

‘It is still a very active scene at this time,’ Hulsey said.