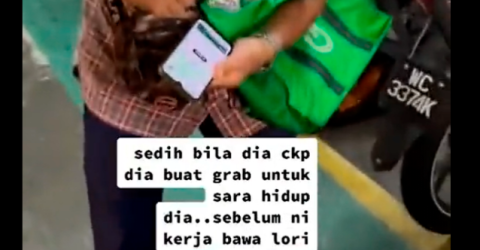 According to Malay Mail, the 16-second video was uploaded on TikTok by Grab Food delivery rider, Ashraf Danny who had bumped into ‘Atuk’ on his usual rounds.

In the video, Ashraf explained that the rider, whom he refers to as ‘Atuk’, was previously a lorry driver, has been a food delivery rider for two months.

“I’m saddened when he told me he was doing Grab for a living.

“May Atuk be under Allah’s protection and may you get blessed with an abundance of wealth too.

“Whenever I see this Atuk, he reminds me of my late grandfather,” Ashraf wrote in his post.

The video shows the Atuk walking slowly in a corridor to do his delivery at an apartment area.