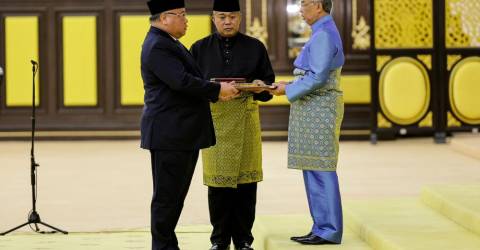 SIBU: Bintulu MP Datuk Seri Tiong King Sing who was appointed as the Tourism Minister in the cabinet that was announced yesterday, said he will carry out his duties and responsibilities with integrity to ensure the well-being of the people and the country.

Tiong, in acknowledging that the task will not be easy when Malaysia and the world are facing economic challenges, said he would perform his duties with dedication and to the best of his abilities, together with the other cabinet members appointed in the Unity government, led by Prime Minister Datuk Seri Anwar Ibrahim.

“At the same time, I hope the staff of the Tourism Ministry, agencies under the ministry and stakeholders will assist me to develop the tourism industry,” he said in a statement, here today.

He added that he was dedicated to carrying out the policies effectively and accelerating the growth of the tourism industry through tourism-based business events that can boost the socio-economic status of the country.

Tiong stressed that all parties must stop the never-ending politicking because it will be detrimental to the people and the country.

He said the tourism sector was now on the way to recovery, thanks to a number of recovery initiatives implemented on the international stage, therefore, the main priority should be to rebuild Malaysia, ensure the welfare of the people and boost economic growth.

Tiong who is also the Parti Demokratik Progresif (PDP) president and Dudong state assemblyman said ensuring the well-being of the people and accelerating the economy must be everyone’s top priority.

He also thanked Yang di-Pertuan Agong Al-Sultan Abdullah Ri’ayatuddin Al-Mustafa Billah Shah for his wisdom which paved the way for the formation of a unity government that would benefit the people and the country.

Tiong also offered his appreciation to Anwar and Sarawak Premier Tan Sri Abang Johari Tun Openg for giving him the opportunity to lead the Tourism Ministry.

In Mac 2020, Tiong was offered the post of deputy minister in the Ministry of National Unity under Tan Sri Muhyiddin’s cabinet but he declined the offer.-Bernama