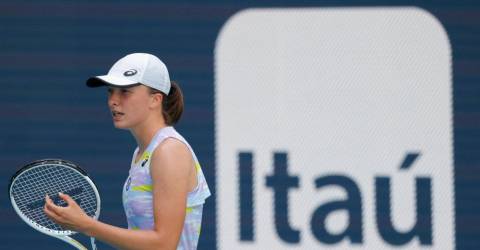 PARIS: Poland’s Iga Swiatek, who will become world tennis number 1 on Monday, has pulled out of the Charleston tournament in the United States.

Swiatak said cumulative fatigue was on the verge of leaving her injured.

“Sorry everyone but after playing a marathon three finals I’m tired, and have a slightly injured arm,“ she explained.

The Polish 20-year-old became only the fourth – and youngest – player to win the “Sunshine Double” of Indian Wells and Miami in the same year following Steffi Graf, Kim Cljisters and Victoria Azarenka with a 6-4, 6-0 win over Osaka.

Swiatek, who will be formally confirmed as world number one when the new WTA rankings are announced on Monday, has now won 17 straight games, a winning streak that includes titles in Doha, Indian Wells and now Miami. – AFP