Toad-ally terrified! Driver freaks out when he discovers a tree frog in his car

This is the moment a Florida motorist almost crashed their truck when a frog which clambered up the passenger side door and leaped onto the his lap.

The man, who was in Sanford, just north of Orlando was filming the frog while using his other hand to hold the steering wheel and a cigarette.

During the video, the man, who has not been identified tells the frog ‘do not look at me’ and exclaiming ‘oh my God, I’m gonna crash’. 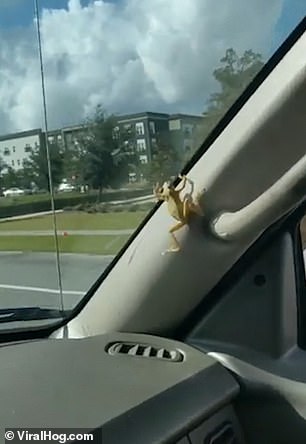 The unidentified driver was filming the frog climbing up his truck’s A-pillar, pictured 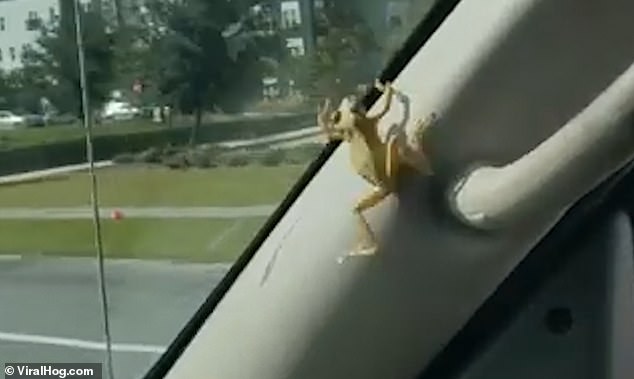 The incident happened on the outskirts of Sanford, Florida and the footage was put online 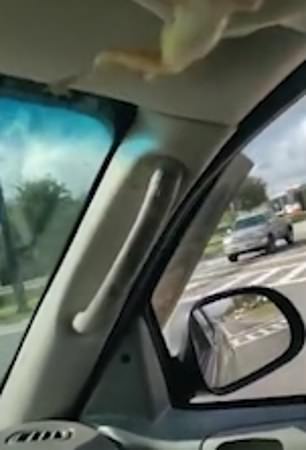 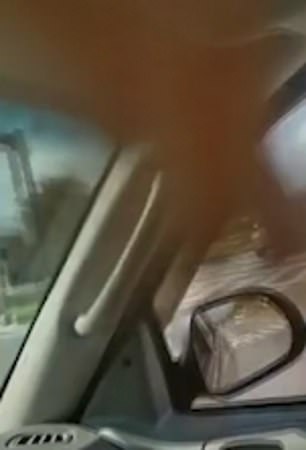 The man was using one had to control the steering wheel and the other to hold his phone. The man started screaming as the frog jumped towards him, swearing at it to ‘don’t f****** do it’

Moment’s later, the frog leaped across the cab forcing the man to drop his phone in blind panic.

He told ViralHog: ‘I went and played an early morning round of golf with a friend. I had some time to kill after so I figured I’d pick up breakfast and coffee for my sister who was home for the holidays.

‘On my way home, after pulling out of the drive-thru, I quickly realized a big tree frog walking across the dash of my truck.

‘As I was recording, driving down the road the frog decided to leap across the cab of my truck and jump onto my phone! I ended up freaking out and losing the frog in the car.

‘When I got home I was able to find him and safely escort him back into the wild!’