As millions of Britons headed to the polls yesterday, TV presenters and pundits were on hand throughout the night to provide coverage of the election.

For many broadcasters, it was a long night of rolling commentary as they kept viewers up to date on results across the UK.

And Tom Bradby – who had been presenting throughout the night – provided a moment of light relief this morning when he handed over to Piers Morgan and Susana Reid on GMB – only for the cameras to continue rolling as he breathed a deep sigh of relief and slumped in his chair.

One viewer wrote online this morning: ‘Oh my god Tom Bradby thought their show had finished when it hadn’t. what an iconic ending.

‘Eight hours of non-stop presenting on election night without a break. total respect.’

The clip was shown on ITV’s live stream of the election.

Most coverage started at 9.55pm as voting ended across the country, running through the night with presenters still going at 6am this morning.

But viewers were divided over coverage, with some accusing the broadcasters of bias towards certain political parties.

Many criticised the BBC for coverage which they say was weighted in favour of the Tories.

Naga Munchetty and Andrew Marr were among the presenters on the ground in key locations, and analysis came from reporters, including political editor Laura Kuenssberg, and polling expert Professor Sir John Curtice.

And just like in 2017, George Osborne and Ed Balls were in the studio to comment on proceedings – aided this time by Ruth Davidson and Alan Johnson. Robert Peston and Allegra Stratton will also be in the studio.

Mr Bercow recently stepped down after 10 years, having been a controversial figure in the chair.

But broadcasters including the BBC and Channel 4 are likely to face consequences for the way they have behaved towards politicians during the election campaign, experts have warned.

Last night one senior industry figure predicted there would be changes in broadcasting rules if the Conservatives win a majority, following a string of rows about TV coverage during the campaign. 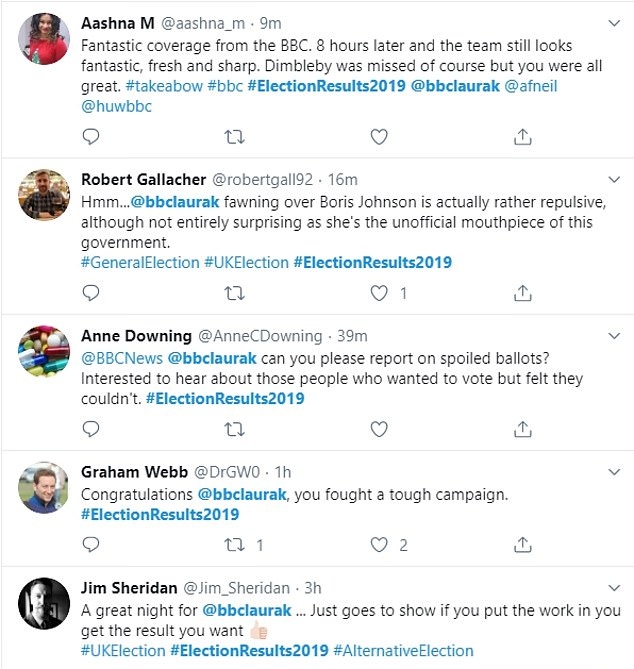 There are concerns that broadcasters have put their own impartiality at risk with a series of tactics including calling out politicians who will not be interviewed and ’empty-chairing’ individuals that decide not to attend debates.

Critics have claimed that during the campaign the BBC and Channel 4 gave the impression that they regard themselves as ‘more important than politicians’.

Among the high-profile incidents in recent weeks was Andrew Neil’s public challenge to Boris Johnson to do an interview with him.

In a video that was widely shared, BBC presenter Mr Neil laid down the gauntlet to the Prime Minister and said it was ‘surely not expecting too much that he spend half an hour’ doing the interview.

The BBC had also initially blocked Mr Johnson from going on The Andrew Marr Show unless he agreed to be quizzed by Mr Neil, a decision which was later reversed.

The Conservative Party also complained to media regulator Ofcom about the way Channel 4 empty-chaired the Tory party during its climate change debate when Mr Johnson declined to attend.

There was anger at the way the broadcaster replaced him with a melting ice sculpture. Ofcom rejected the party’s complaint.

But Channel 4 News was also forced to apologise after wrongly suggesting Johnson had described immigrants as ‘people of colour’ when he had actually said ‘people of talent’.

It comes as Mr Johnson hinted earlier this week that the BBC licence fee could be axed.

He said he was looking at whether it made long-term sense to impose a £154.50 annual levy on all homes with TV sets.

His chief adviser Dominic Cummings is leading a review of the BBC’s funding.

As an initial step, the licence fee could be decriminalised, ending the corporation’s power to prosecute non-payers, sources said.

The practice of ’empty-chairing’ MPs, where a seat with no-one in it is used to represent an absent politician in a debate, could face tougher rules, according to experts.

Insiders also pointed out the practice of ‘calling-out’ politicians who declined to be interviewed on certain shows had risked breaking impartiality rules.

Former Channel 5 chief executive David Elstein said: ‘I think Channel 4 has more to worry about because it has been more overtly hostile and taken more risks.’

He said even though Ofcom had cleared the ice sculpture incident he thought it was likely that if the Tories were re-elected they ‘will want to re-examine the whole situation as to what constitutes fair dealing’.

Discussing Channel 4, he added: ‘To have your head of current affairs calling the Prime Minister a liar, to repeatedly empty chair and to treat yourself as being entitled to demand that any politician turn up at your studio that you require is well beyond what they should be doing.’

He added: ‘Broadcasters have got it into their heads that they are more important than politicians. Well, sorry, broadcasters serve the audience, politicians serve the electorate. Different things.’

Mr Elstein added that incidents like Andrew Neil’s challenge to Johnson might leave the BBC ‘pretty vulnerable’ and could result in ‘consequences’.

Former director of communications for David Cameron, Craig Oliver said: ‘I was struck by how Channel 4 seemed to relish the row and do things like sticking a melting ice sculpture in a studio as a way of shaming the PM. Personally I don’t think it is ever particularly wise to behave that way.’

On the potential for Government to hit back at BBC after election, he said: ‘I think they might rattle sabres but I don’t think they will really go for it…In reality taking on the BBC is a spectacularly difficult thing.’

One senior BBC source admitted that whether Labour or the Tories win the broadcaster was unlikely to enjoy good relations.

They said: ‘There is a sense that whoever wins will not be friends of the BBC.’

The BBC has been hit with many thousands of complaints during the campaign, from all sides, amid accusations of political bias.