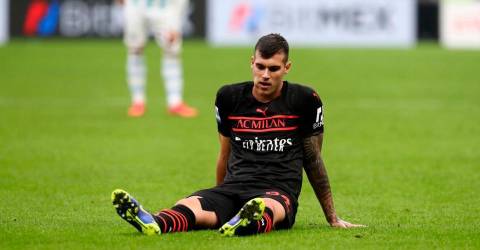 MILAN: Fragile Torino forward Pietro Pellegri (pix) suffered yet another injury blow on Sunday when he fell over and injured his ankle at kick-off of his team’s Serie A clash at Bologna.

Pellegri, who has one cap for Italy, slipped over just three seconds into the fixture at the Stadio Dall’Ara and limped off the field in the fourth minute following treatment.

In May 2017, Pellegri became the first player born in 2001 to score in Serie A, netting against Roma aged just 16 in Francesco Totti’s final match for Roma. Early the following year he was sold to Monaco from Genoa for 21 million euros.

Injuries have plagued the 21-year-old’s career ever since and he was sold to Torino at a big loss this summer.

Pellegri has already had thigh problems twice this season and Sunday’s match was reportedly the only time in his career he had participated in four consecutive matches in senior club football.