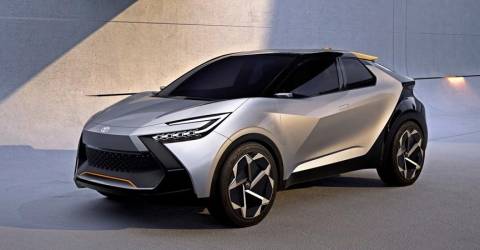 Now Toyota has also revealed the C-HR prologue and mentions that it is a preview of the next generation of the compact SUV. It’s likely that the new model will be launched in 2023 though there’s no indication whether it will be during the early part or as late as the Japan Mobility Show (the new name for the Tokyo Motor Show) at the end of October.

The C-HR prologue is a concept model but gives an idea of how the second generation of the compact SUV will look like. Like the first generation which had styling that was bolder than usual for Toyota, the new one takes that further with a precision organic design language, bigger wheels and shorter overhangs. While having sharper lines, it still appears to be a bit bulbous.

At the front, the C-HR prologue has a smaller grille opening topped by slimmer headlights to accentuate the high-tech identity. Like the current model, it looks like there are only two front doors but the handle for the rear doors is up at the C-pillar, and the designers will probably use this idea again.

The concept model is finished with a tri-colour option of sulphur over a metal silver and recycled carbon black to give it a distinctive appearance.

The new concept was designed by Toyota’s European Design Development team ED2 which was also responsible for the current C-HR. According to Design Director Lance Scott, the challenge was how to build on the attention that the first-generation C-HR received. “Our mission was to dig deep, to go further than we’d gone before,” Mr Scott said.

The new C-HR will certainly be using TNGA (Toyota New Global Architecture), like the current model which uses the TNGA-C which is scaled for smaller models. TNGA not only has a weight-optimised structure but also sets the centre of gravity lower.

The current model is available with combustion engine and hybrid powertrains and in China, there is also a variant with only an electric motor. To strengthen Toyota’s multi-technology strategy in electrification, it is likely that hybrid and plug-in hybrid powertrains will be offered, with a battery electric version for China and Europe.