US Trade Representative Robert Lighthizer has said the first phase of a China trade deal designed to reduce tariffs and boost U.S. exports to the Asian giant is ‘totally done’.

The two countries agreed to a deal on a Friday to a roll back on some US tariffs with China promising to purchase at least $200billion of American goods in the next couple of years.

China has also pledged to improve its intellectual property enforcement, stop currency manipulation, give US financial service firms access to the Chinese market and restrain the transfer of US technology to Chinese firms.

The news has acted as the major driver for a whopping 2.6 per cent rise in the FTSE 100 index to hit 7,542. Positive sentiment stemming from the Tories’ election win last week is still in play as well.

U.S. Trade Representative Robert Lighthizer (second from right) said the agreement between the USA and China ‘is more enforceable and is better for American workers and American manufacturers and agricultural workers than it was before’

American shares are also expected to see big rises today in wake of the developments.

Speaking on CBS’s Face the Nation programme yesterday, Lighthizer said: ‘This bill…is more enforceable and is better for American workers and American manufacturers and agricultural workers than it was before, for sure.’

The USA has said it will not reduce the 25 per cent duties it currently levies on Chinese imports, but has agreed to halve the 15 per cent tariffs it currently enforces on technological goods such as iPhones, televisions and headphones.

The deal also means that expected tariffs worth $160billion on Chinese imports will not go ahead.

Stocks in Asian markets had a mixed performance on Monday with Chinese shares hitting a six-week high, but the Japanese Nikkei slipping by 0.29 per cent.

After an agreement was reached on Friday, Trump tweeted: ‘We have agreed to a very large Phase One Deal with China.

‘They have agreed to many structural changes and massive purchases of Agricultural Product, Energy, and Manufactured Goods, plus much more. The 25 per cent Tariffs will remain as is, with 7 1/2 per cent put on much of the remainder…’ 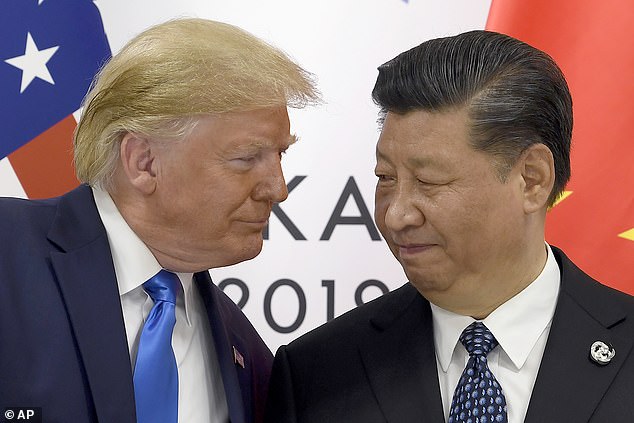 The USA has agreed to to halve the 15 per cent tariffs it currently enforces on technological goods such as iPhones, televisions and headphones. China has promised to purchase at least $200 billion of American goods in the next couple of years

‘The Penalty Tariffs set for December 15th will not be charged because of the fact that we made the deal. We will begin negotiations on the Phase Two Deal immediately, rather than waiting until after the 2020 Election. This is an amazing deal for all. Thank you!’

The rollback of tariffs may provide a boost for Donald Trump, who faces re-election next year and who has pointed to the strong American economy as a major rallying point.

But some sectors of the American economy have been negatively affected by the trade war, especially the agricultural sector. 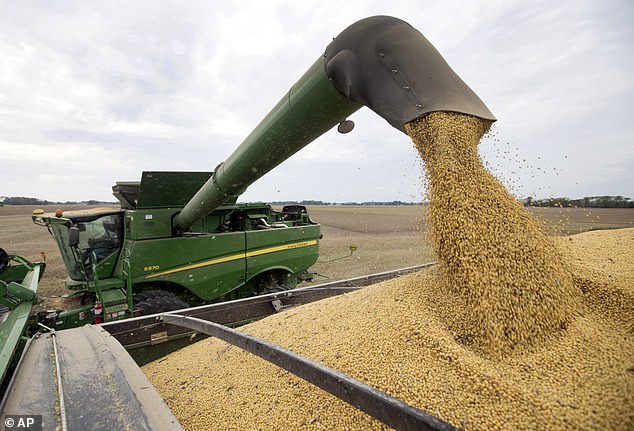 Soybean farmers have suffered particularly badly from the trade dispute. U.S. soybean exports to China fell from $12.2billion in 2017 to $3.1billion in 2018. In August, China banned imports of all American agricultural products after Trump imposed new tariffs on Chinese goods

In August, President Donald Trump put a 10 per cent tax on $300billion worth of Chinese goods in August. In response, China banned imports of all American agricultural products.

One study by four economists published last month in the Quarterly Journal of Economics found that the 2018 tariffs and subsequent retaliatory measures caused a $51billion for American consumers and businesses.

It also discovered that Republican voting agricultural counties which voted for Trump have been the most affected by the retaliatory tariffs imposed by countries like China, India and the European Union countries.

The U.S. government has given two separate bailouts to farmers, totalling $28billion, with states like Iowa, Illinois and Minnesota all receiving a large proportion of the rescue package.

ING economist Timme Spakman warns that despite detente, the trade war is not over and that phase one of the deal avoided talking about the ‘most sensitive topics’ such as Chinese state subsidies.

He wrote: ‘Negotiating a phase two deal that is acceptable for both sides on these issues is very difficult because both parties are poles apart on these issues.

‘Moreover, Chinese officials emphasised that US actions have ‘severely damaged the hard-earned basis for mutual trust’.

‘As he is aware of these problems, we expected that President Trump would have been somewhat reluctant to create expectations that a phase two deal would have been closed before the US elections.’