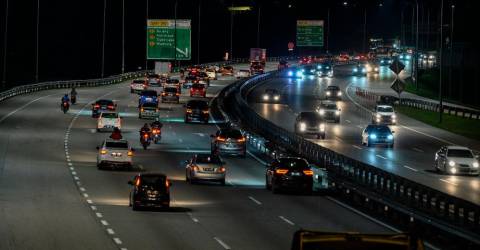 KUALA LUMPUR, Nov 17 (Bernama) — Traffic flow on the main highways throughout the country increased as of 10pm due to the number of people heading to their hometowns to fulfill their obligations to vote in the 15th General Election (GE15) on Saturday, since today has been declared a public holiday.

According to a Malaysian Highway Authority (LLM) spokesman, traffic congestion was reported along the North South Expressway (PLUS) north-bound, especially from Slim River to Sungkai over 7.4 kilometer (km) stretch and Tapah to Gopeng covering a stretch of 6.4 km.

Traffic congestion was also reported from Senai to Kulai, Bukit Lanjan to the Rawang (R&R) and Bidor to Tapah, he said.

“Meanwhile, an accident was reported along the Senai to Skudai (KM 20.6) stretch forcing traffic to come to a snail pace for 5.5 km although no lanes were blocked.

“An accident at Bandar Ainsdale to Nilai late afternoon has been cleared and traffic flow returned to normal,” the spokesman told Bernama last night.

He added that traffic along PLUS (South bound) was moving at a slow pace between Sedenak to Kulai and Putra Mahkota to Nilai following an accident involving three vehicles.

Meanwhile, a spokesman from the East Coast Expressway (LPT) when contacted said significant traffic congestion was reported from Gombak to Bukit Tinggi involving a stretch of 14.6 km, Kuantan to Lentang (4.5 km) and Lentang to Bentong (2.8 km).

Traffic on all main highways throughout the country is expected to increase from midnight following the toll free ride offered by 30 toll concessionaires in conjunction with the GE15 from 12.01 (Nov 18) to 11.59pm of Nov 19. – Bernama