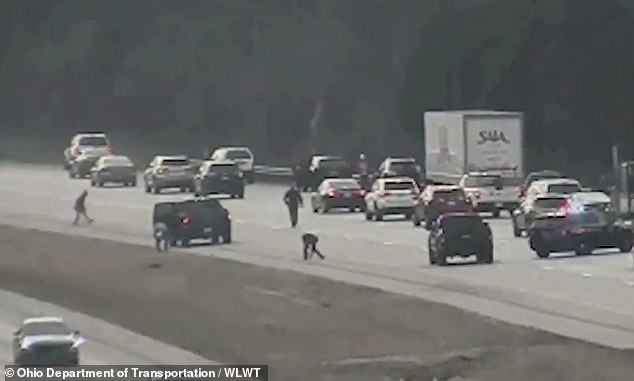 Traffic stop! Drivers jump out their cars and scoop up cash spread on highway after backpack full of money is thrown from vehicle in Ohio

By Ruth Bashinsky For Dailymail.Com

Flying money stopped traffic on a major thoroughfare in Ohio as drivers – some with plastic grocery bags – leaped out of their vehicles to scoop up the cash.

Video from the Ohio Department of Transportation shows people standing in the middle of the busy four-lane highway, including law enforcement, attempting to pick up the cash from the road.

Some drivers were seen with plastic bags to carry their bundle.

Some witnesses initially thought the flying money was debris but soon realized it was actually money. A welcome surprise for some as the Christmas holiday nears.

The wild incident took place on Tuesday afternoon around 3:45pm on Interstate-71 in South Lebanon and State Route 48.

Several witnesses alerted authorities to report the flying bills scattered along the roadway and to report a backpack full of cash thrown from a vehicle, the Warren County Sheriff’s Department said, WHIO News reported.

But, where the money came from and the amount of money that fell onto the roadway remains a mystery. 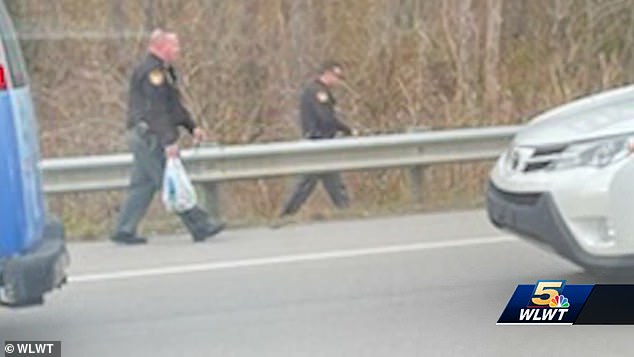 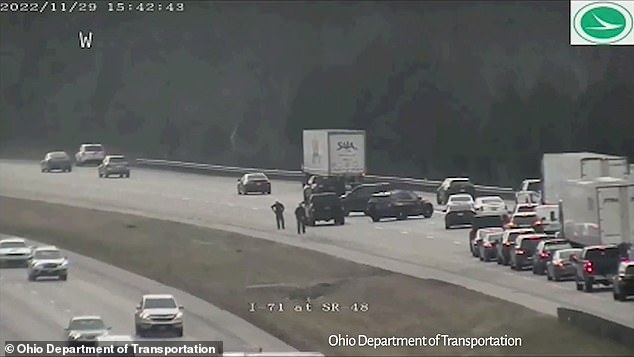 Intersate 71 is a busy four-lane highway located in South Lebanon. Officials closed the road for nearly an hour to clean up the roadway

The chaotic scene put hundreds of cars and trucks at a standstill and closed the Interstate for nearly an hour.

Deputies from the Ohio State Highway Patrol Lebanon Post were on the scene to assist and there were no reports of any traffic collisions.

Kathleen Fuller, a spokesperson with the Ohio State Department of Transportation told DailyMail.com that their department closed the southbound side for about 45 minutes to an hour.

She said the State Highway patrol was on site to make the physical closure and stayed on the scene. According to Fuller, ‘cars pulled off to side of roadway and people were getting out of their cars to pick up the cash.’

‘We have no idea how it was dropped from a car from a truck we don’t know,’ she said.

It was also unknown if the money was real or counterfeit.

According to a sergeant with the sheriff’s office, there haven’t been any reports of local businesses missing money, the news outlet reported.