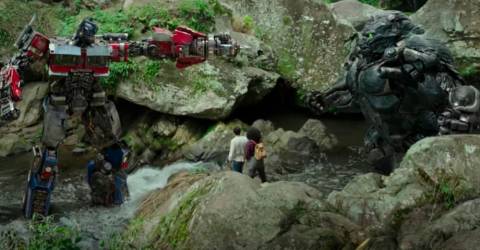 PARAMOUNT Pictures has revealed the first trailer for Transformers: Rise of the Beasts, the seventh film in the Hasbro franchise, which is set for release on June 9, 2023.

Ramos plays Noah, a former military electronics expert who lives in Brooklyn with his family to support them, and Fishback plays Elena, a museum artifacts researcher.

Peter Cullen, who has voiced Autobot leader Optimus Prime throughout the franchise’s existence, will also return. The film is set in 1990s Brooklyn and is inspired by the Beast Wars storyline from the franchise.

The trailer introduces Optimus Primal, the Maximal leader who can change into a gorilla and is voiced by Ron Perlman. As the two Optimus Primes meet, Primal alerts Prime of a brand-new threat to their Earth.

The film also includes the Terrorcons Scourge, Nightbird, and Battletrap, as well as the fittingly named Rhinox and Cheetor.

Rise of the Beasts also acts as the first instalment of a planned trilogy, with two future sequels in the works.