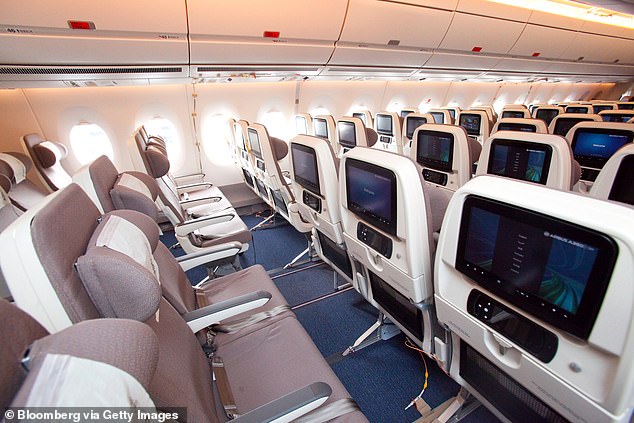 Fed-up travelers have demanded the FAA widen seats on passenger planes after airlines admitted they were shrunk to satisfy recent demand and cheaper ticket prices, a string of scathing complaints on the agency’s website has revealed.

The outcry comes after Federal Aviation Administration (FAA) officials in August asked the public for their views on the size and subsequent safety of their mandated seats, which have withered drastically over the years.

Within months, more than 26,000 travelers had responded – with nearly all airing complaints concerning a lack of leg room and comfort on American flights.

The comment section paints a bleak picture of diminishing passenger experience on the US’ most popular airlines – with the word ‘torture’ appearing in more than 200 of the passengers’ posts.

The public forum was closed this past week, with the FAA – which has no rules for seat dimensions and has been put under pressure by Congress to make a judgment concerning their accepted measurements – yet to level a response.

Travelers demanded the FAA widen seats after airlines admitted they were shrunk to satisfy recent demand. It comes as several carriers have revealed they have reduced widths by as much as two inches in years past

It comes as several US carriers have revealed they have reduced seat widths by as much as two inches from the 18.5 inches that was almost universal in years past.

Legroom has also shrunk drastically, to 31 inches from an average of 35. On some carriers, that distance – measured from one point in a seat to the same point on one in front or behind – is as little as 28 inches.

The agency has since been subject to increased pressure from lawmakers as well as passengers as to the legality of those changes, amid concerns the seats are too tight for passengers to evacuate.

Airlines, meanwhile, have pushed back on calls to widen their seats, arguing the seats are wide enough and far enough apart to allow for fast evacuation.

‘The current seats are too small for Americans of average size, myself included,’ one concerned commenter, named Emily Clarke, wrote to the agency amid the outflow of negative comments regarding seat size concern.

Clarke added that she is concerned the shifts, made by carriers to raise their bottom lines, ‘will significantly impact my ability to quickly evacuate the aircraft in case of emergency.’

She, like so many others, would call on the FAA to take action and mandate those airlines with new seat requirements, to address those safety concerns – not to mention discomfort.

‘My wife and I just recently flew to Grand Cayman on a Boeing 737 800/900 and were noticeably uncomfortable in the tiny seats,’ commenter John Naughton wrote in one such critique.

‘Not only are the tiny seats terribly uncomfortable,’ Naughton noted that the packed planes seemed ‘to be a terrible hazard should there be a need to evacuate the plane due to some emergency.’ 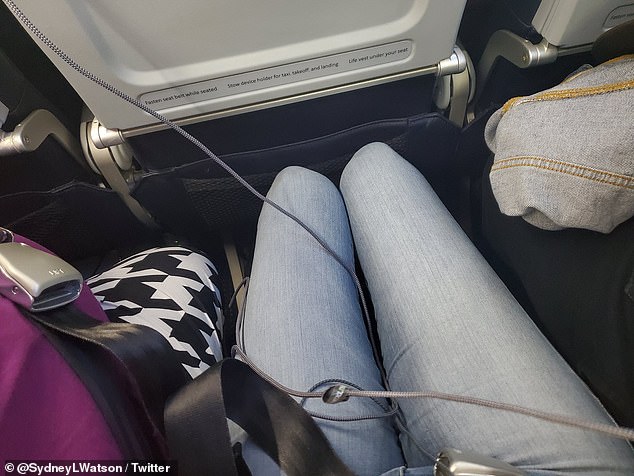 Legroom has also shrunk drastically over the years, from 35 inches to 28 on some carriers. Pictured is a passenger who found herself ‘sandwiched’ between two passengers on a recent American Airlines flight

He added that the cramped conditions also ‘create potential for unneeded tensions amongst the passengers.’

Other, taller travelers took issue with the noticeably diminished legroom on flights – one of several practices enacted by airlines who in recent months have sought to recover losses incurred during the first two years of the pandemic.

Scott Parkinson, a  6-foot-5 male, wrote in October that the lack of leg space has forced him to jam his knees into the seat in front of him to stay seated, leaving him ‘in pain for the entire flight.’

‘I am a 6’5″ tall male,’ Parkinson wrote, adding that he is ‘of average height’ in his family and has relatives ‘even taller than I am.’

The traveler went on to declare ‘the leg room on flights to be painfully inadequate.’ 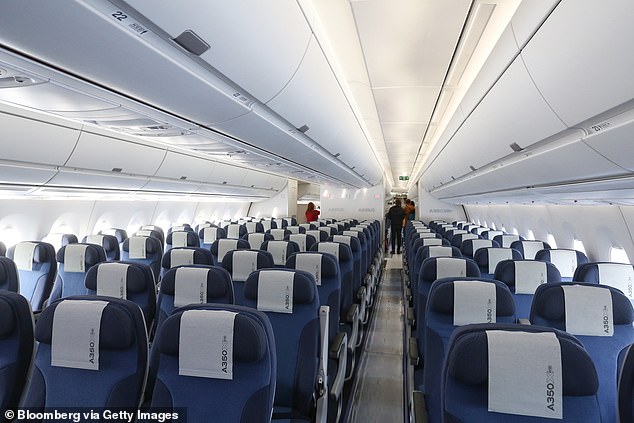 Airlines, meanwhile, have pushed back on calls to widen their seats, arguing the seats are wide enough and far enough apart to allow for fast evacuation

‘It is even worse if the passenger in front of my seat reclines their seat,’ he continued.

He suggested seats ‘be placed further apart,’ so travelers ‘have a decent amount of leg room and your knees don’t touch or crowd the seat in front of you.’

Jill Kenney further added that seats for her son, who she said weighs 215 pounds and is a similar 6-foot-6, ‘are too small for his legs to fit comfortably.’

She added that she was tall with long legs as well, and that the seats are subsequently ‘too narrow for me.’

The concerned mom would then air concerns about safety – which she asserted had been the forefront of her mind when looking at the pared down seats.

Within months, more than 26,000 travelers had responded – with nearly all airing complaints concerning a lack of leg room and comfort on American flights, after officials in August asked the public for their views on the size and subsequent safety of their mandated seats

She further predicted that airlines would charter ‘less fights… if people could fit in more comfortably.’

‘I am most concerned about safety,’ Kenney wrote. ‘If you are in a window seat, it may take too long to evacuate in the narrow aisles.’

She went on: ‘There would also be less fights on [airlines] if people could fit in more comfortably. I have traveled on over 26 flights so far this year. I speak from experience.’

Countless other comments aired virtually identical protests over the FAA’s failure to address the safety and comfort concerns, as federal law requires the agency to rule on minimum seat dimensions with both concepts in mind.

In official comments submitted to the FAA, however, the union representing major US airlines – Airlines for America and the International Air Transport Association – urged the agency to stay focused on safety, ‘and not comfort or convenience.’ 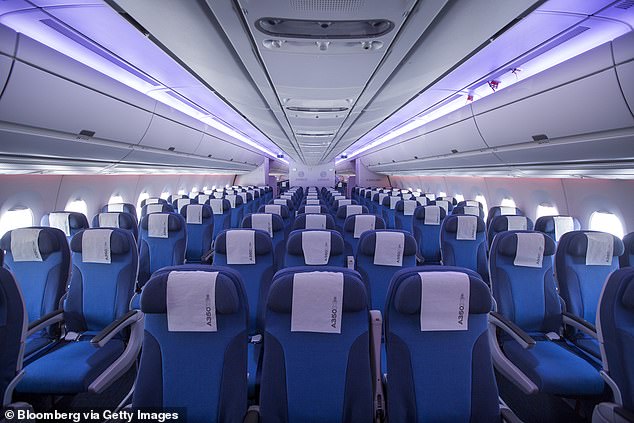 Any decision made by the agency – which recently raised its average weight requirements for passengers to address Americans’ increasing weight – will prove crucial to the airlines, who have been balancing demand for cheaper airfare and increased space.

The agency raised its average weight figures in 2019 – adding 15 pounds to the average winter and summer weights for men, and 34 pounds for female passengers.

The changes were enacted to compensate for the rising average weight for the typical American – up an additional 15 pounds since the late 1980s.

Meanwhile, the FAA – which oversees all aspects of civil aviation in the country -continues to face pressure from from Congress and passengers to make a judgment concerning shrining seat sizes.

Federal standards require evacuating a plane within 90 seconds of it coming to rest in an emergency, and a 2018 law requires the FAA to set the minimum safe seat dimensions.