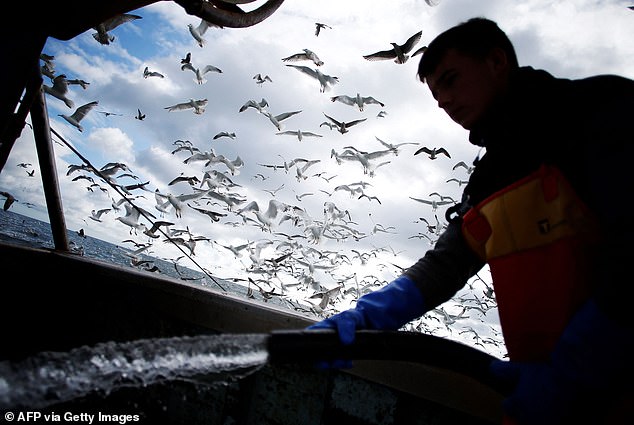 Trawler fleets in £34million Brexit boost as they get go-ahead to net 30,000 more tonnes next year

By David Churchill For The Daily Mail

British trawlers will be able to catch a quarter more fish next year than when the UK was in the European Union, the Government said yesterday.

Fisheries minister Mark Spencer said they could net more than 140,000 tons – 30,000 tons up on Brussels quotas. The increase is worth £34million.

The breakthrough follows agreements with coastal neighbours including the European Union and Norway.

‘These negotiations are a crucial route for the UK to protect our fish stocks, to safeguard the marine environment and, in turn, to ensure that the fishing industry can profit and thrive,’ said Mr Spencer.

British trawlers could net more than 140,000 tons of fish next year compared to when the UK was in the European Union

Under a post-Brexit trade treaty, 25 per cent of the EU’s fishing rights in UK waters are being progressively transferred to British fleets between 2021 and 2026. The latest deals relate to 69 species, including catching albacore tuna.

More Cod can also be caught in the North Sea under the deals, along with Whiting and Saithe.

In the Irish Sea, UK trawlers will be able to catch more Megrims and Anglerfish, Nephrops in the Celtic sea and Hake and Spurdog off the west coast of Scotland.

Mr Spencer told the Commons: ‘As an independent coastal state, we have taken back control of our waters and have the freedom to negotiate on our own terms and push for deals that will deliver for the UK fishing industry, for the marine environment, and for all parts of the United Kingdom.

‘I am delighted to say that this autumn the UK has secured vital deals for 2023 with our coastal state neighbours, including the European Union and Norway.

‘Taken together, these deals have secured more than £750 million-worth of fishing opportunities for the UK fleet in 2023, £34 million more than last year.’

He added: ‘This deal provides fishing opportunities for more than 140,000 tonnes… The House will also want to note that, as a result of the quota share uplifts agreed in [post-Brexit trading arrangements], the UK has around 30,000 tonnes more quota from these negotiations than it would have received with its previous shares as a member of the EU.’