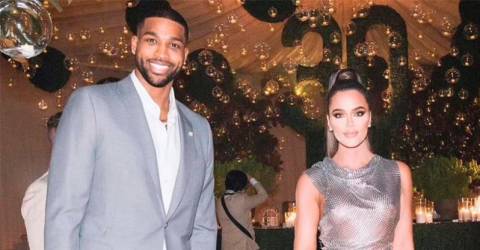 AFTER months of speculation, it has now been confirmed that the serial cheat partner of Khloé Kardashian has in fact been unfaithful once again.

A public apology was issued by Tristan Thompson to her on Monday, after a court-ordered paternity test confirmed that he fathered a third child with personal trainer Maralee Nichols.

The post read: “Today, paternity test results reveal that I fathered a child with Maralee Nichols. I take full responsibility for my actions, Now that paternity has been established, I look forward to amicably raising our son.

“I sincerely apologize to everyone I’ve hurt or disappointed throughout this ordeal both publicly and privately.”

“My actions certainly have not lined up with the way I view you. I have the utmost respect and love for you. Regardless of what you may think. Again, I am so incredibly sorry.”

Thompson had previously disputed the paternity of the child, who was born Dec 1 last year The baby was reportedly conceived while he was rekindling his relationship with Kardashian, with whom he shares a three-year-old daughter, True.

Thompson and Kardashian previously split in 2018 following reports Thompson cheated during Kardashian’s pregnancy. The pair split again in 2019 after Thompson’s cheating scandal with Jordyn Woods, however, they decided to give their relationship another try in October 2020.

The paternity drama took over most of last year, with Nichols attempting to sue Thompson for child support and the athlete ordering a genetic testing in July, and then once again in November.

According to court documents, Thompson acknowledged that he spent time with Nichols in March last year as he celebrated his birthday. At that time, he was still dating Kardashian.

The pair finally split in June 2021 after these latest allegations, hopefully for the last time.