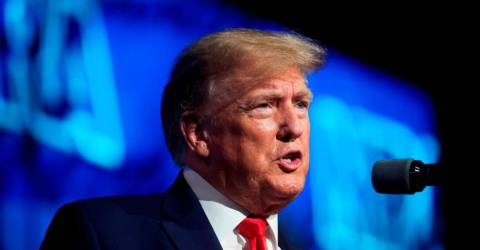 WASHINGTON: A Republican congressman who voted to impeach Donald Trump(pix) over the US Capitol assault has been trounced in his bid to keep his seat by a candidate backed by the former US president.

South Carolina’s Tom Rice, a five-term member of the House of Representatives, lost his nominating contest — known in the United States as a “primary” election — to a state lawmaker who netted around twice as many votes.

Trump had asked supporters to mark his 76th birthday on Tuesday by delivering him defeats for Rice and another of his Republican foes in the Palmetto State, Nancy Mace.

Mace comfortably fended off a Trump-backed challenge despite condemning the former president following last year’s insurrection — although she didn’t vote to impeach him.

The pair had followed markedly different strategies in their bids to win a chance to fight November’s midterm elections despite Trump’s ire.

Mace’s attempts to make amends with Trump’s base — including filming a campaign video outside Trump Tower in New York — appear to have paid off as she took 53 percent of the vote.

Rice, on the other hand, defiantly stood by his opposition to Trump, recently describing the Republican leader as a “narcissist” who was “spiteful and petty and vengeful.”

“Republicans can survive crossing Trump, but rarely can they survive being anti-Trump,“ Politico concluded in a report on the two races.

Ten Republicans in the House of Representatives voted with Democrats days after the riot to impeach Trump for inciting insurrection. Four have announced their retirements, with Rice becoming the first of the remaining six to lose his seat.

“Every single endorsed by Trump candidate won last night, by big margins, with the exception of one very long shot who did FAR better than anticipated against an incumbent,“ Trump said on his social media platform.

“The ‘Impeacher’ was ousted without even a runoff. A GREAT night!”

This month, a congressional committee began holding televised hearings into the insurrection, and has accused Trump of being part of a conspiracy to overthrow the election he lost to Joe Biden.

Republicans who have embraced Trump’s fantasies of election fraud have won more races than they have lost in this year’s Republican primaries.

In Nevada, election-deniers Adam Laxalt and Jim Marchant easily won the Republican nomination to campaign for a Senate seat and secretary of state, respectively.

Underlining the stakes of the upcoming November contests, the Nevada Independent said Marchant’s success raised the prospect that a candidate who “fundamentally distrusts Nevada’s election system and believes the results have been fraudulent for decades could be in charge of running them.”-AFP