‘It’s not fair!’ Trump whines about impeachment and says it is unjust because he has ‘done absolutely nothing wrong’ then blames the ‘Radical Left and the Do Nothing Democrats’ and says ‘they are so bad for our country!’

By Keith Griffith For Dailymail.com and Wires

President Donald Trump has complained that the impeachment process ‘isn’t fair’ as House Democrats move closer to passing articles of impeachment against him.

‘It’s not fair that I’m being Impeached when I’ve done absolutely nothing wrong! The Radical Left, Do Nothing Democrats have become the Party of Hate. They are so bad for our Country!’ Trump wrote in a tweet on Friday night.

It follows the House Judiciary Committee’s vote earlier in the day to recommend articles of impeachment to the full House for a vote sometime next week.

Earlier Friday, Trump declared in the Oval Office that the Democrats had ‘made absolute fools of themselves’ by moving ahead with impeachment.

Trump stands poised to be the third president in history to be impeached, though it is all but certain he will not be removed from office by the Republican-controlled Senate.

‘You´re trivializing impeachment when you use it for absolutely nothing other than trying for political gain,’ Trump said as he sat alongside the president of Paraguay. ‘It’s a sad thing for the country but a good thing for me politically.’

Trump’s latest pushback on impeachment came a short time after Giuliani turned up at the White House.

Giuliani, who has been deeply involved in the Ukraine dealings at the heart of the impeachment inquiry, has been expected to meet with Trump, who requested a briefing from the former New York City mayor on his recent trip to Kyiv. 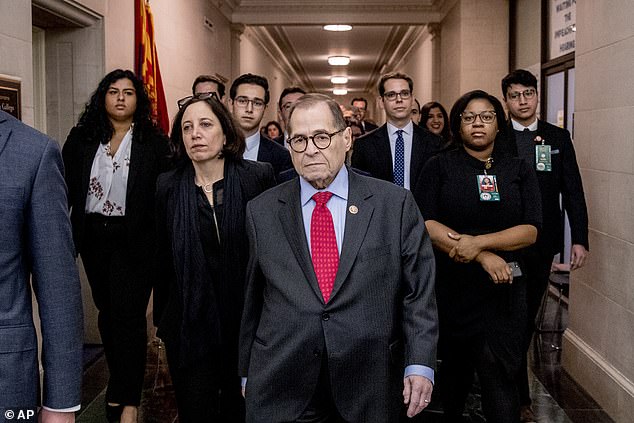 Trump, who ignored a shouted question about his lawyer, also has urged Giuliani to inform the Justice Department and Republican senators about what he discovered in Ukraine.

Giuliani did not immediately respond to a request for comment but tweeted that ‘The American people have already made up their mind on this #ImpeachmentScam. This is a SMOKESCREEN for the Obama-Biden administration´s corruption. It will soon be proven.’

A White House spokesman did not immediately confirm whether Trump met with Giuliani.

But Kellyanne Conway, senior counselor to the president, played down the visit, suggesting that Giuliani ‘may be going to the Christmas party’ in the White House.

The House is expected to approve the two articles of impeachment next week, before lawmakers depart for the holidays.

Trump is accused, in the first article, of abusing his presidential power by asking Ukraine to investigate his 2020 rival Joe Biden while holding military aid as leverage, and, in the second, of obstructing Congress by blocking the House’s efforts to probe his actions.

‘Today is a solemn and sad day,’ Chairman Jerrold Nadler, D-N.Y., told reporters after the session, marking the third time in U.S. history the panel has voted to recommend impeaching a president. He said the full House would act ”expeditiously.”

At the White House after the votes, Trump denounced the inquiry and actions against him, using the terms he’s relied on for months. He referred to the impeachment effort four times as a hoax, twice as a sham and once each as a scam, a witch hunt and a disgrace. He described his actions as perfect three times and said four times he did nothing wrong.