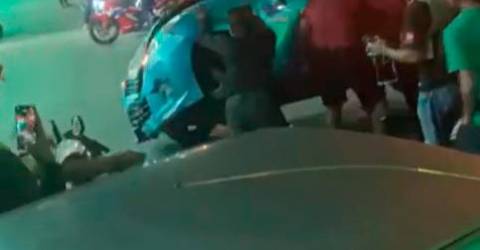 UNTIL road and traffic laws are properly enforced, there will always be errant road users, and with them, the ever increasing probability of accidents and unfortunate incidents.

Towards the end of last week, video footage of a riot in Taman Kota Masai in Pasir Gudang, Johor began to go viral on social media.

This Nov 4, 2022 Facebook post shows a blue Myvi being destroyed and overturned by a large group of people near a petrol station.

The car suffered massive damage in the incident. The driver was reportedly rescued and placed in a police cruiser for their safety.

One user claimed that the car hit a Foodpanda rider close to the petrol station.

Elsewhere on social media, there were claims were that both the Myvi driver and the rider drove against their respective red lights. Others claimed that after hitting the rider, the Myvi sped to the petrol station to escape the scene, without checking on the victim.

On the DashCam Owner Malaysia page, the Myvi’s dashcam footage was released (viewer discretion is advised). It somehow survived the carnage the rest of the car endured.

The footage revealed that not only was the Myvi driver not speeding, but that the traffic light on their side of the road was green, not red, which means it was the rider that drove against the red traffic light, a common occurrence on Malaysian roads.

In the comment section, another video was posted, where the driver can be seen checking on the injured Foodpanda rider.

Three suspected rioters have been arrested by the police so far.

Do you feel that the vigilante justice meted out by these rioters was excessive?