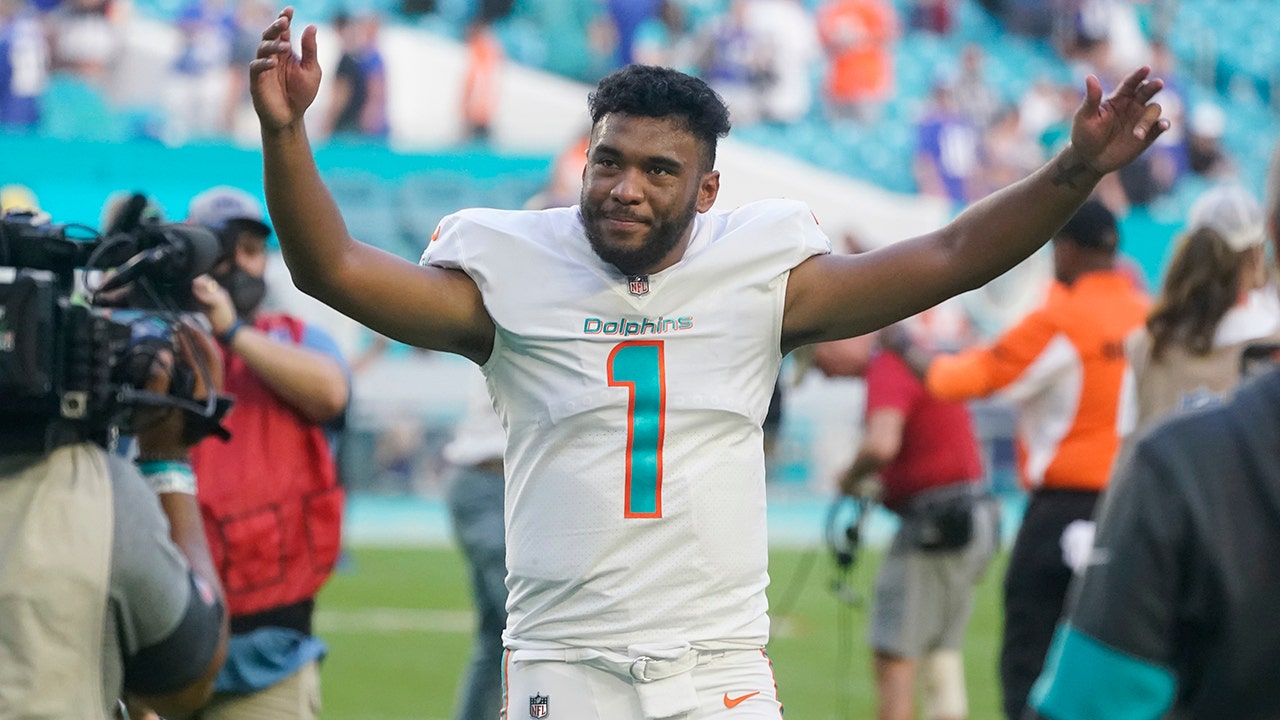 Tua Tagovailoa threw a pair of short touchdown passes, and the Miami Dolphins extended their winning streak to five games by topping the New York Giants 20-9 on Sunday.

Isaiah Ford and Mack Hollins had the scoring grabs for Miami (6-7), which has shaken off a 1-7 start. Jaylen Waddle had nine catches for 90 yards for the Dolphins, and rookie Jaelan Phillips had two more sacks — giving him five in his last two games.

Tagovailoa completed 30 of 41 passes for 244 yards and the two scores.

Mike Glennon started at quarterback for the Giants in place of Daniel Jones, who was sidelined with a neck injury. Glennon completed 23 of 44 throws for 187 yards, and Saquon Barkley had 55 rushing yards on 11 carries.

But New York never found the end zone against a defense that has yielded only 55 points during the five-game winning streak. Graham Gano had three field goals for the Giants, including a 51-yarder with 4:59 remaining to get New York within 17-9.

The Giants had a chance to force a three-and-out about a minute later, but Tagovailoa found DeVante Parker with a 16-yard pass that required an acrobatic sideline catch to keep the drive alive. And on another third down with 3:14 left, Tagovailoa lofted one perfectly for Mike Gesicki for a 17-yard gain.

New York was out of timeouts, unable to do anything but watch the Dolphins run the clock down to 1:16 before sending Jason Sanders on for a 48-yard field goal, pushing the lead to 11 and sealing the outcome.

The Dolphins took the lead late in the first half on a 5-yard pass from Tagovailoa to Hollins, the capper to a 14-play, 89-yard drive. It was quintessential Miami of late, the formula that has worked with Tagovailoa, relying on the short ball to chip, chip, chip away.

He was 11 for 12 on the drive for 77 yards, only one of those throws going for more than 10 yards, six of them going for no more than 6 yards. The only true deep shot in the series came after the Giants jumped offside; Tagovailoa knew he had a free play and let fly with an incompletion that didn’t count anyway.

Giants: WR Kenny Golladay (ribs) left the game in the first half, then returned to the game after halftime.

Dolphins: Waddle was shaken up in the fourth quarter, pointing to his left knee after a catch. He limped off the field as fans chanted his name, and as he waved his arm to encourage more volume he started walking more briskly and then began to jog. … RB Patrick Laird (knee) was lost in the first quarter, on a day when RB Phillip Lindsay was unavailable because of an ankle issue.

The first penalty of the game came with 1:55 left in the first half, when the Giants’ Leonard Williams jumped offside. The second penalty, and first on the Dolphins, happened with 7:18 left in the third quarter when left tackle Liam Eichenberg was guilty of a false start.