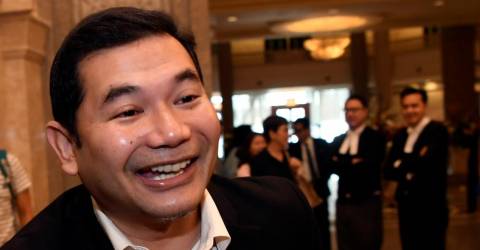 Tuan Ibrahim said he had instructed his lawyers Messrs. Yusfarizal Aziz & Zaid to do so when he received a written reply from Mohd Rafizi’s lawyer or after the expiry of the seven-day period that he had been given to apologise.

He said yesterday Mohd Rafizi held a press conference to provide solid evidence regarding the allegation, but he only made false accusations and misrepresentation of facts with the malicious intent to destroy his reputation.

Tuan Ibrahim said in the press conference, Mohd Rafizi alleged that the Treasury secretary-general issued a letter dated Oct 7, 2022, to the Ministry of Environment and Water (KASA) secretary-general to inform the Minister of Finance’s decision to award the Sungai Langat 2 flood mitigation project through direct negotiation to Mangkubumi Sdn. Bhd.

“According to the letter, it is clear that the approval was not made by me or KASA. The letter was issued on Oct 7, 2022, before Parliament was dissolved and not during the period of the interim government (caretaker),“ he said in a statement posted on his Facebook page today.

Therefore, he said Mohd Rafizi failed to provide proof of his involvement in the project approval including his or KASA’s bid to award the project during the interim government.

Tuan Ibrahim said he had made it clear that he had never met, consulted, or taken any action to approve the project within the period.

“Therefore, it is clearly proven that Rafizi’s statements, including yesterday’s press conference, are defamatory to destroy my reputation, and PAS’ reputation in general,“ he added.

The media reported yesterday that the PAS deputy president demanded Rafizi apologise over his claims that KASA was in the process to award the RM2 billion project. –Bernama