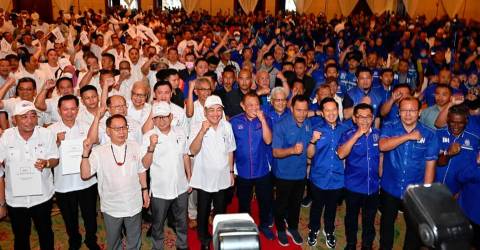 At a gathering with Tuaran UMNO and Bersatu divisional leaders at Dewan Seri Sulaman, here, Hajiji said the decision to field Joniston, who is Kiulu assemblyman from Parti Bersatu Sabah (PBS), was made in the interest of the constituents.

Hajiji, who is also Sabah Chief Minister, said GRS was formed on an understanding that it was time for all to work together to develop the state.

“We must not repeat past mistakes. (Due to) too much politicking, the responsibility to develop the state was not executed…it is time that we stop the political bickering and concentrate on developing the state instead,“ he added.

The Chief Minister said that one of the reasons Sabah had become the second poorest state in Malaysia despite having so much resources was due to too much political bickering.