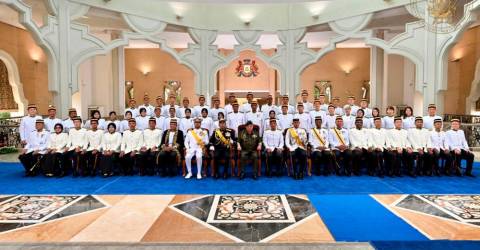 He announced the matter in his opening speech of the second meeting (official opening) of the First Session of the 15th Johor State Legislative Assembly at the Sultan Ismail Building, Kota Iskandar, here, today.

“I have appointed Tunku Mahkota Johor as the Regent, I want to take a break, thank you, starting today,“ the Ruler decreed.

However, he did not say until when Tunku Ismail will be the Regent.

The last time Tunku Ismail was appointed as Regent of Johor was on Aug 10, 2019.

Last week, Tunku Ismail, the owner of the Johor Darul Ta’zim Football Club (JDT) announced that he was stepping back from running the club and handed over its day-to-day affairs to its top management.

In a post on the Johor Southern Tigers Facebook on June 9, Tunku Ismail said the decision was due to his other responsibilities and commitments.-Bernama