And they said they didn’t want a cat! Heartwarming snaps reveal dads’ special bonds with furry friends they previously claimed to hate

Grumpy dads who insisted they didn’t want a cat in the house, have melted hearts after forming touching bonds with their furry friends.

Cat lover Ruby, from London, kickstarted a heartwarming Twitter thread by sharing a snap of her father, who initially didn’t want to get a cat, showing their feline, Lucas, ‘every item of the weekly shop because “he wants to see what we’ve got”.’

Another image showed Ruby’s father standing out in the rain, protecting Lucas and their other cat wit an umbrella, and building them a sandpit and paddling pool.

Other people chimed in, sharing adorable pictures of their own parents with cats they supposedly didn’t want in a thread that’s received almost 63,000 likes.

‘My dad didn’t want me to get a cat, but puts my cat in the bed with him when I’m out of town,’ one said.

Feline friends: A cat lover from London named Ruby shared a picture of her father, who said he hated cats, showing the family feline his shopping (pictured) in a viral Twitter thread 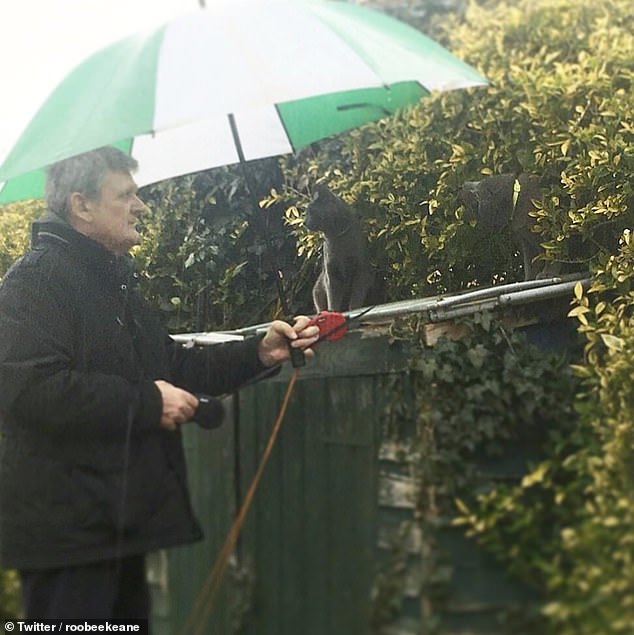 Ruby went on to say her father sometimes used an umbrella to shelter the cats from the rain, and kept them on leash so they wouldn’t be run over by cars on the nearby road 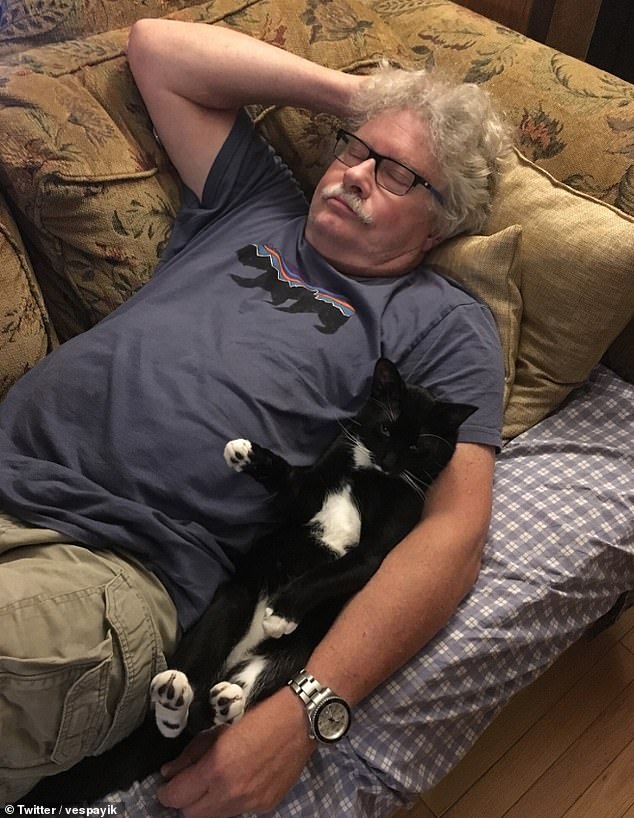 ‘My dad, who didn’t want a cat when I was a kid but we got one anyway and he loved her, visited me recently and made me go and buy a laser pointer so he could play with my cats while he was here,’ one said.

Another, said her partner claimed to be ‘allergic’ to cats, but now runs around ‘barking like a dog when she’s bullied by another cat in the garden’.

Meanwhile, another dad who gave his daughter 24 hours to get rid of her rescue cat not gives up his own chair in the living room so the pet can sit on it. 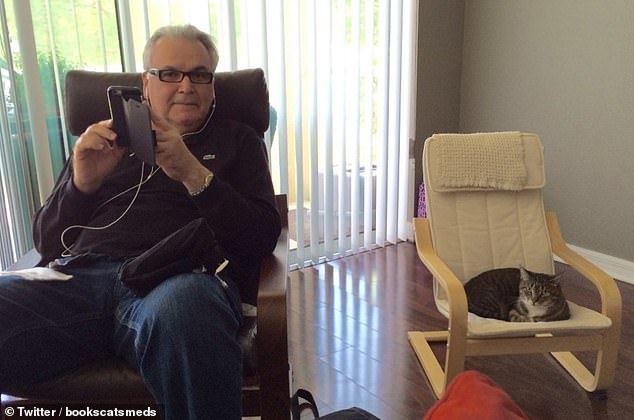 Rebecca Cohen explained her father first threatened to throw out a cat she had rescued six months ago, but now was best of pals with the feline (pictured) 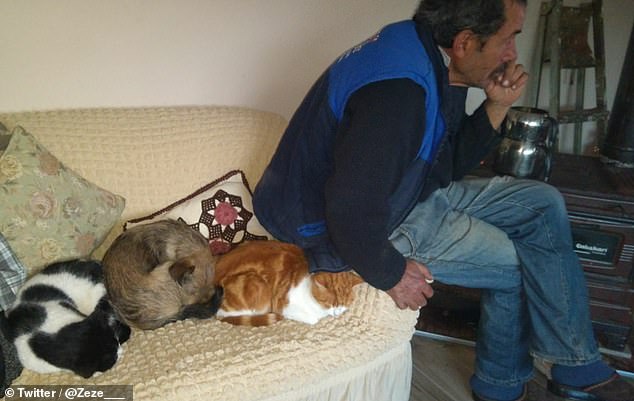 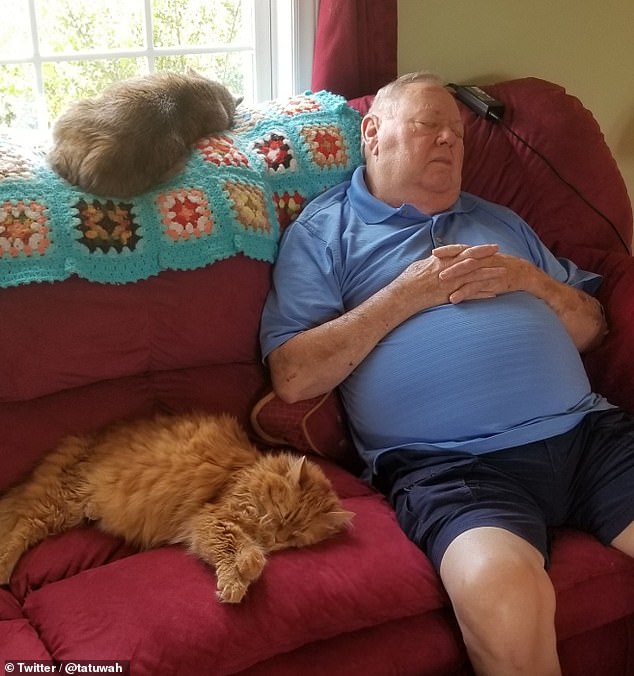 Abby, from Clayton, North Carolina revealed her ‘dad who hates cats’ loves to nap with his two furry buddies 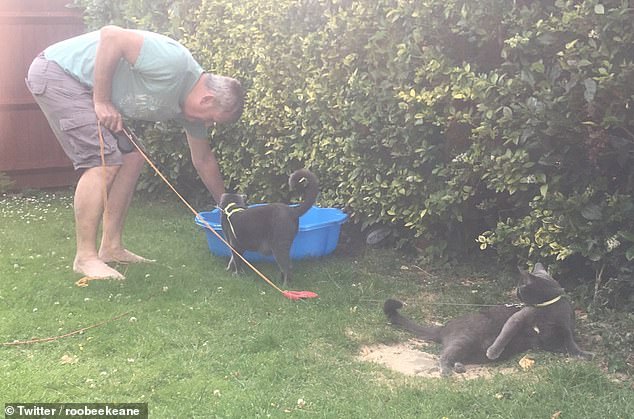 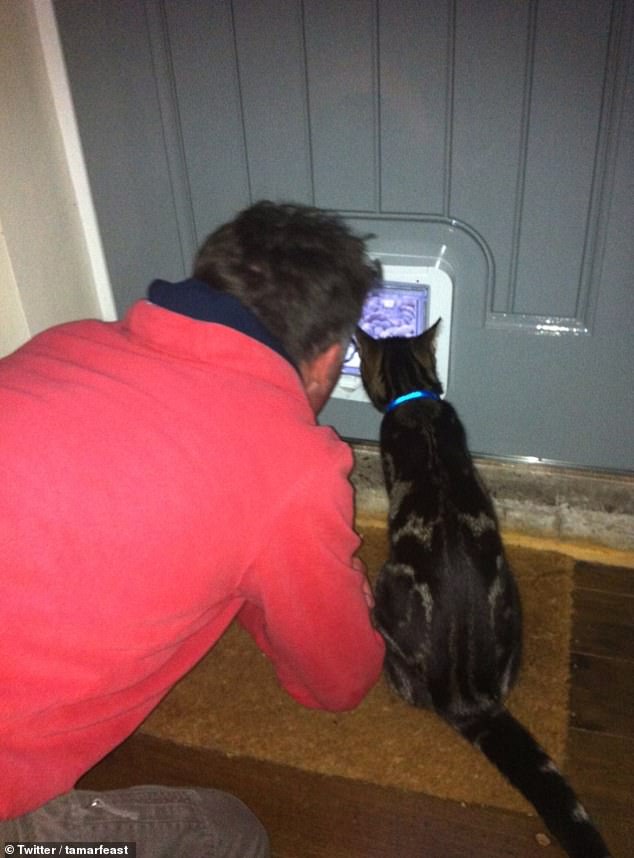 Girlfriend Tamar, from the UK, explained her boyfriend had claimed he was allergic to cats to avoid getting one, but now pretends to bark at dogs who hassle their pet 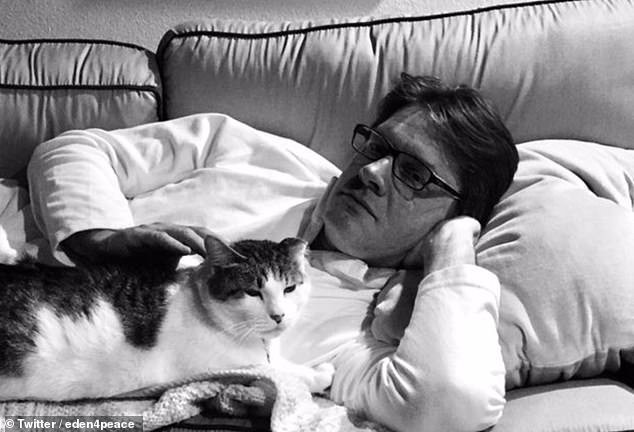 Eden, from Los Angeles, said her husband was against getting a cat as well, but has since changed his tune 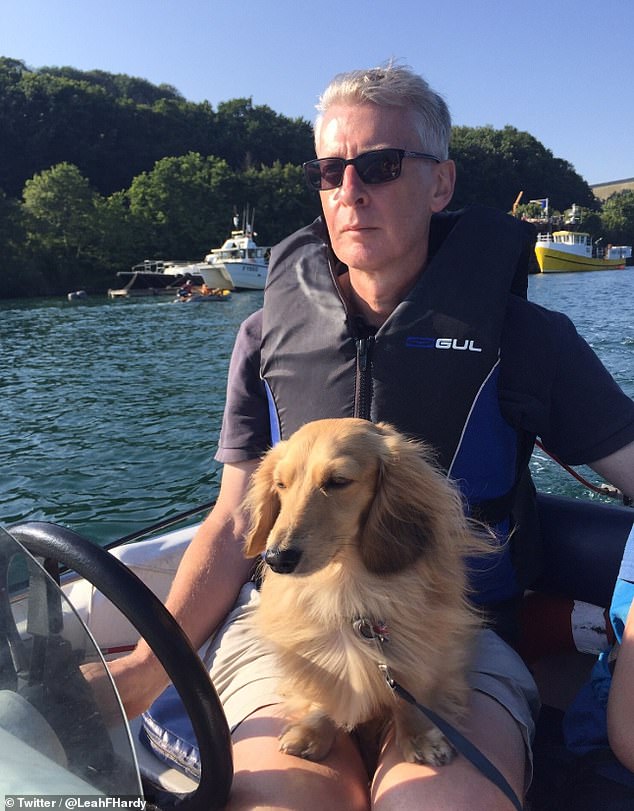 Londoner Leah Hardy revealed her husband had objected getting a dog, but now takes him everywhere, including on-board a boat

People delighted in the thread, and shared their own stories of relatives who didn’t want pets but ended up loving them