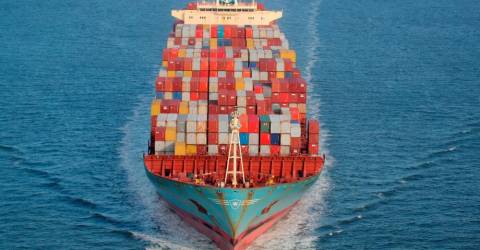 STOCKHOLM: Two cargo ships collided on Monday during foggy conditions in the Baltic Sea between the Danish island of Bornholm and the southern Swedish city of Ystad, and a rescue operation was launched for two missing people, authorities said.

The 55-metre Karin Hoej, registered in Denmark, had capsized and was upside down, the Swedish Maritime Administration (SMA) said. It had two people on board and they were missing, the Danish Defence’s Joint Operations Centre (JOC) said.

The other ship, the 90-metre, British-registered Scot Carrier, was functional and its crew were safe.

The rescue operation near the site, which was riddled with wreckage, was ongoing more than five hours after the incident. Swedish divers were standing by on land to investigate the hull, the SMA said.

Water temperature is around 4-6 Celsius in the area, according to the Danish Meteorological Institute.

“I can confirm an accident has happened but I do not know the circumstances,“ said Soren Hoj, managing director of the shipping company Rederiet Hoj, which owns the Karin Hoej.

The vessel, which was not loaded, was sailing from Sodertalje in Sweden to Nykobing Falster in southern Denmark with two people on board, he said.

The U.K. vessel MV Scot Carrier was sailing from Hargshamn north of Stockholm to Montrose on Scotland’s east coast, according to Refinitiv Eikon data. Its owner Scotline said it could not comment on details of the incident but was assisting and complying with local authorities as required.

A spokesperson for the Danish Meteorological Institute said there was fog in the area at the time of the accident, around 3.30 a.m. (0230 GMT).

Denmark was helping Swedish authorities with the rescue, in which a total of nine vessels and a Danish helicopter were participating. Civilian vessels in the vicinity were also helping.

The accident happened in Swedish territorial waters and the two ships were sailing in the same direction when they came into contact.

Denmark’s JOC was not immediately able to say whether the ships carried any hazardous cargo.

“The Danish ship, which is upside down, is a relatively small ship, so it has so little oil on board. That is not what worries us at the moment,“ it said.

The SMA said the Danish vessel was empty of cargo and it was unclear what if any the British ship was carrying. – Reuters