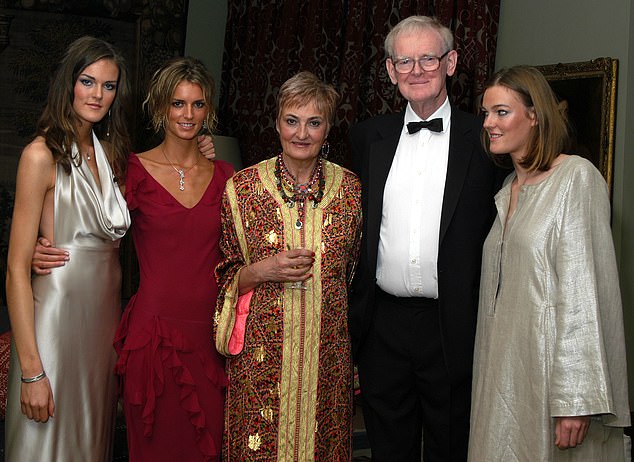 He is also in the middle of a busy day — he’s just finished attending an online funeral for an old pal, Alan Brown, another bookmaker and Ukip donor. And, at 5.30pm, he has a ‘very important’ online bridge match.

‘I’ve played a lot of online bridge lately,’ he tells me. ‘For the first time, there’s no money at stake, and yet I adore it.’

So, in between, he invited me to lunch. During lockdown. Parsnip soup, shepherd’s pie, summer berries and cream, cheese and biscuits: the works.

‘Red wine, white wine, gin and tonic — what would you like?’ he asks almost before I’ve got my coat off.

‘What is most annoying — and the worst thing about having cancer — is that that it has taken away my appetite for alcohol. But, funnily enough, two nights ago, for the first time in ages, I had quite a lot to drink and really enjoyed it. No wonder we lost our bridge match!’ he beams and pours us both an enormous glass of Macon.

Stuart is 85, very chatty, has incurable stomach cancer and has been given just six months to live.

‘I’m very disappointed,’ is how he puts it. ‘The doctors have been a bit pessimistic so far. There’s a one-in-a-million chance they could operate, but that is most unlikely, so it’s just a matter of arranging a comfortable death.’

This is something he has gone to a lot of trouble to ensure.

‘I’m a big physical coward. I want every painkiller going. I’ve spent a lot of time arranging things called “advance decisions” and legal power of attorneys to make sure that on no account are they to fail to give me a painkiller, just because it might kill me.’

HIs OTHER major concern is jump-starting his social life, while he can.

Pre-Covid, it was jam-packed with bridge matches, poker tournaments, an annual foray to Las Vegas for the World Series Poker Championship (‘it is an expensive luxury — £10,000 to enter — but very enjoyable’) and weekend house parties at Chilham Castle, his 17th-century pile in Kent.

Every weekend, for decades, ‘a great crowd’ of between 12 and 25 guests have descended.

‘There are 13 bedrooms, I think, so plenty of space for a good party — big dinners, bridge games.

‘The treatment hasn’t stopped me. I don’t do the cooking, so it’s no problem having people to stay. It’s such a waste to be there alone.’

But then came lockdown.

His daughters, Sarah, Jacquetta (the former supermodel), Charlotte, and their families moved in for a magical few weeks — ‘I had every conceivable happiness, it was incredibly precious’ — but his pals had to stay away.

So, last week, he wrote a round-robin letter to 25 or so of his closest chums, including writer Giles Coren, who quoted from it in his column in The Times:

‘Dear all of you, it seems likely there will soon be further relaxing of the restrictions and I hope it will become possible for us to have people to stay at the castle. It will be completely understandable if some of you, when invited, decide not to come because you are afraid that you or your children might catch the virus.

‘But what would be dreadful, would be if you declined to come because you were afraid you might give the virus to me. As many of you know, I have cancer and my doctors do not expect me to live more than about six months.

‘So what would I prefer: to never see my friends again, or to see them, taking the very slight risk of catching the virus, which might shorten my life by a few months? The answer is crystal clear.

‘No one who, for my sake, declines an invitation to visit us is doing me a favour. By depriving me of their company, they are doing me a great disfavour. Yours ever, Stuart.’

He didn’t dither over the letter for a moment. ‘The way I look at things, I’d far rather take the risk.’

Of course he would. His whole life has been about calculating odds and taking risks — ever since his first Point-to-Point, back in the 1940s when, aged seven, he put a shilling on Brightest Day in the second at evens and won.

When he was at Eton, he ran a book on the Derby; while at Christ Church, Oxford, he ran his own roulette table.

Although he insists he is not an addict, has gambled pretty solidly ever since — at bridge, blackjack, poker, roulette — with everyone, from Lord Lucan (‘a very friendly chap — l liked him’) to Somerset Maugham, Omar Sharif and Ian Fleming, who was a member of same bridge club (‘A very timid bidder — no James Bond, he!’). In the early 1960s, he was thrown out of Caesar’s Palace in Las Vegas for playing the system at blackjack and, when he was 40, he set up IG Index with a £5,000 loan from the chairman of his bridge club.

So, when his wife, photographer Tessa Codrington, was facing a potentially life-saving operation back in 2016, after a ten-year battle with a neuroendocrine tumour, he studied the odds very carefully.

‘I’m a bookmaker, so when we discussed the surgery, we considered how likely it was that the operation would kill her,’ he says. ‘They said it was a three per cent chance. We’d have taken 50:50. The fact is, the operation did kill her.’

He goes a bit quiet and pours some more wine.

Despite his jam-packed life and the ‘wonderful’ support of his three daughters, he admits that, privately, he has managed ‘not particularly well’. 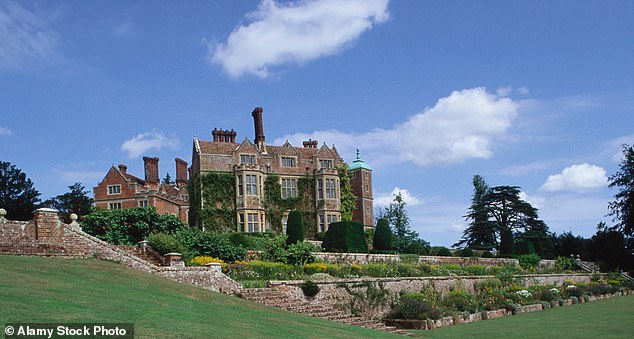 Pre-Covid, it was jam-packed with bridge matches, poker tournaments, an annual foray to Las Vegas for the World Series Poker Championship (‘it is an expensive luxury — £10,000 to enter — but very enjoyable’) and weekend house parties at Chilham Castle (pictured), his 17th-century pile in Kent

He adored Tessa. They met at a dinner party in 1979 when he was 44. He thought her ‘rather fine and interesting’, and they married nine months later.

‘We were very, very different. Tessa and I had no interests in common, unless you count our children and the theatre, but it didn’t matter. She was great fun.’

She was much more interested in her horses than money and once organised a nun strippagram for Stuart at his IG Index desk.

‘It wasn’t until she’d taken half her clothes off that I realised it was a joke!’ he says.

From the moment Tessa was diagnosed with cancer in 2007, Stuart attended every medical appointment with her — loyal, supportive, steadfast, though never one for emotional outpourings.

‘It’s odd. I freely talk all the time about the fact that I’m dying — that sort of thing doesn’t bother me,’ he says. ‘But love? No, I think I’m quite bad at that.’

He puts it down to a combination of being adopted when he was two (his Scottish mother had him out of wedlock when she was 42), English public school (‘I went to Eton rather younger than most’) and being bullied.

He was slight, born with a club foot, desperately unsporty and, by the sound of it, a natural target for the mean kids. ‘It was psychological, not physical, but it made life a misery,’ he says. (For decades he vowed never to weaken and forgive them, though he has now.)

He can’t weep, either. ‘The last time I cried was when I failed to get a first at Oxford,’ he says.

But, despite all that, just before Tessa died, something unlocked.

‘I did tell her, right at the end, that I loved her like mad,’ he says.

Today, he focuses on the things that make him happy — his adored girls, his grandchildren, friends, bridge matches and his castle.

He has lived an amazing life, rubbing shoulders with the great and good and not so good.

He borrowed P.G. Wodehouse’s car to drive across America (‘Not such a wit in life’). He was shot in the face in National Service. He met Greta Garbo — ‘I was scared of all women, so she was no different’ — and then made a fortune.

He sold his company in 2003 for £34 million, just before its shares rocketed in value. It is his only serious regret. ‘I could have been much, much richer!’ he says.

But he still had enough to buy, renovate and run a castle, complete with grand ballroom, two tennis courts and white marble swimming pool; and gave a record £5 million to the Tories in 2001 without flinching.

But other than the castle, and a flat overlooking London’s St James’s Square, he insists he isn’t flashy. He wouldn’t dream of flying first-class and still drives a battered old Volkswagen.

While he once said he would leave nothing to his daughters, he’s changed his mind. ‘In fact, I have given, and will leave them, rather a lot, and a big chunk to anti-torture charities, too.’

Other than regular blood transfusions — ‘such a time-consuming bore’ — his treatment is minimal, though he admits to a few gloomy thoughts in the early hours, but he has no anger about his illness — ‘it’s just the luck of the draw’ — and adores his surgeon.

‘He tells me the exact truth! It’s so much better. He’s quite pessimistic, but I know where I am. I can plan.’

And, of course, get those invitations out to tempt his friends down to Chilham for a few final hurrahs. Truly, it is hard to imagine facing as stark a future as Stuart’s with such dignity, humour and courage.

‘I am a very notable physical coward, so I would have expected to be scared of dying, but I’m not,’ he says. ‘I regret that I am going to die soon, because I enjoy my children and grandchildren and I don’t like the idea of not being there later on.’

With it all so close, has he started to think about ‘afterwards’? Could there possibly be anything?

‘My instinct is probably not. I wouldn’t bet on it, but there might be. I hope so. Because if there is, I’ll see Tessa again.’