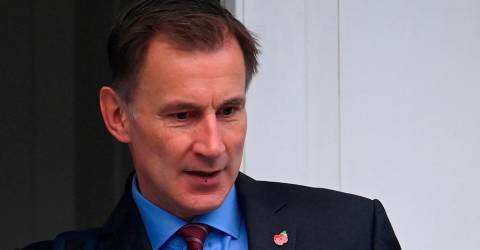 LONDON: Britain is set today (Nov 17) to unveil hefty tax rises and spending cuts at the risk of worsening a cost-of-living crisis for millions in the recession-bound economy.

A day after official data showed UK inflation rocketing to a 41-year high above 11%, finance minister Jeremy Hunt (pic) will trigger a fresh era of austerity after the calamitous and short-lived tenure of prime minister Liz Truss.

The chancellor of the exchequer will insist his strategy “protects our long-term economic growth” while being “compassionate” towards the most vulnerable.

“We aren’t immune to these global headwinds, but with this plan for stability, growth and public services, we will face into the storm,” he is expected to tell parliament, according to the Treasury.

“Tackling inflation is my absolute priority and that guides the difficult decisions on tax and spending we will make on Thursday,” Hunt said, as Britain’s Press Association quoted the Treasury as saying the package would be worth £54 billion ($64 billion).

Hunt at the weekend likened himself to the penny-pinching miser Ebenezer Scrooge in Charles Dickens’ festive favourite “A Christmas Carol”, but argued that his plan will “make sure Christmas is never cancelled”.

It comes as UK workers across various sectors have gone on strike this year to demand pay rises to compensate for surging inflation.

State-employed nurses and firefighters could be the latest groups to carry out industrial action, joining further walkouts this winter by rail workers and postal staff.

Bank of England (BoE) governor Andrew Bailey on Wednesday told MPs he would not take a pay rise this year.

“I would politely decline as I have done before,” said the central bank boss, who earns around £575,000 per year.

The BoE says that Britain is probably already in recession after its economy shrank in the third quarter and is set to do so again in the final three months of the year.

The bank, which is raising interest rates to combat sky-high inflation, has warned the UK economy may experience a record-long recession until mid-2024.

Alongside the tax and spend plans, the government will today update its forecasts for UK growth and inflation, which are expected to underline the dismal outlook ahead.

Hunt has already set about reversing Truss’ much-criticised budget by curtailing a freeze in domestic fuel bills, which have surged largely owing to the invasion of Ukraine by major energy producer Russia.

Helping to stabilise markets, he also reversed her plan to cut tax on company profits.

Hunt has hinted at raising municipal taxes and cutting budgets across government departments.

To help the poorest with rocketing energy bills, the government is expected to ramp up a windfall tax on oil and gas giants, whose profits have surged on fallout from the Ukraine war.

Hunt is also said to be preparing a windfall tax on firms generating electricity, whose earnings have also soared this year.

The Ukraine war has massively contributed to worldwide inflation hitting the highest levels in decades. Prices are also up on pandemic-fuelled supply constraints.

“It’s undeniable now that we’re seeing a much bigger slowdown in trade in the UK compared to the rest of the world,” Dhingra told the Treasury committee of the House of Commons. – AFP