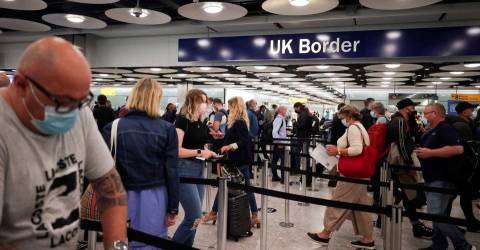 LONDON: Britain’s interior minister Suella Braverman warned on Thursday that planned strikes by border force workers at major airports including Heathrow and Gatwick over the Christmas period may cause delays.

Border Force workers at several British airports will go on strike for eight days this month in a dispute over pay, threatening huge disruption to travel plans at one of the busiest times of the year.

Braverman said people should think carefully about their plans to fly abroad in the coming weeks.

“They may well be delayed on arrivals,“ she told reporters. “Ultimately, security at the border is my number one, non-negotiable priority.”

The PCS trade union said around 2,000-3,000 staff employed by Britain’s interior ministry, the Home Office, would be involved in the walkouts on all but one day between Dec 23-31.

The Times newspaper reported the action could lead to up to 30% of flights being cancelled on those days. Heathrow and the other airports have said they are working with the airlines and Border Force to mitigate disruption.

Britain faces widespread industrial action throughout December, with railway workers and nurses due to walk out next week. – Reuters