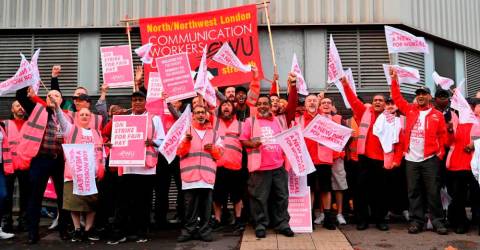 LONDON: Tens of thousands of British railway workers nationwide will go on strike on Oct. 8 in an ongoing dispute over pay and working conditions, the trade union representing them said on Thursday.

The National Union of Rail, Maritime and Transport Workers (RMT) said 40,000 members from Network Rail and 15 train operating companies would take part in the fresh round of industrial action next month.

RMT general secretary Mick Lynch said it was encouraging that new transport minister Anne-Marie Trevelyan, who took up the role earlier this month, had met with the union.

“However, as no new offer has been tabled, our members have no choice but to continue this strike action,“ Lynch said.

“We will continue to negotiate in good faith, but the employers and government need to understand our industrial campaign will continue for as long as it takes.”

The RMT had already previously announced a walkout for Oct. 1, potentially disrupting travel to the governing Conservative Party’s conference in Birmingham in central England which begins on Oct. 2.

A separate rail union is also planning to take strike action on Oct. 1 and Oct. 5.

Britain has faced strikes by workers across a number of sectors as wages fail to keep pace with soaring inflation and a deepening cost-of-living crisis. -Reuters