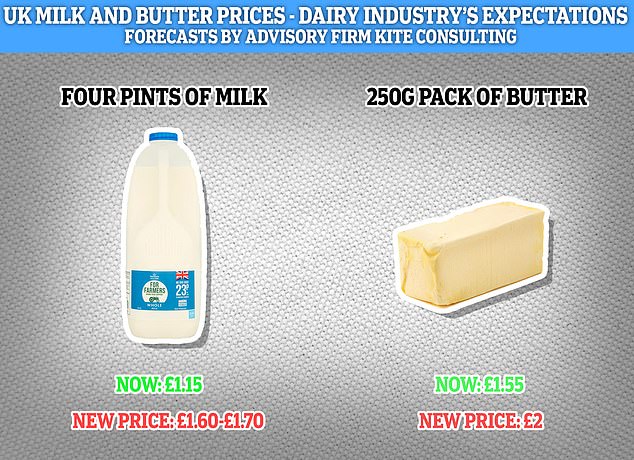 By Sophie Huskisson For The Daily Mail

The price of milk is to rise by 50 per cent and butter by 30 per cent amid a worsening cost of living crisis, it has been claimed.

Industry bosses fear that surging costs from feed, fertiliser and fuel will cause an increase in prices not seen in decades.

It comes as dairy farmers flew into Brussels last week for crisis talks over soaring costs and supply chain disruption.

The cost of four pints of milk will rise from around £1.15 to between £1.60 and £1.70, according to the UK’s leading adviser to dairy farmers Kite Consulting.

Meanwhile a typical pack of butter could increase from £1.55 to more than £2. The war in Ukraine is also said to be impacting prices. 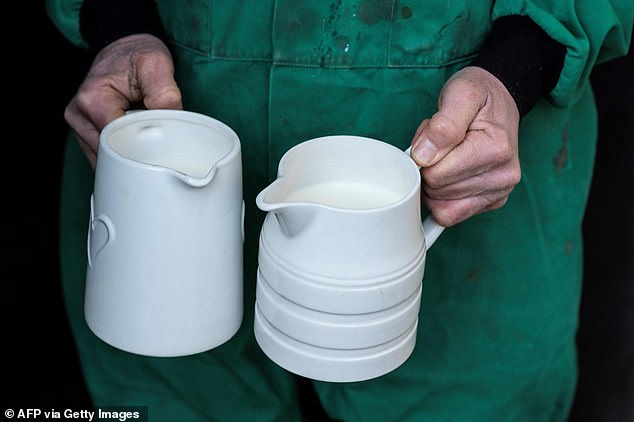 Experts from Kite also say that cheese could go up in price by about 20 per cent from around £8/kg to £10/kg because milk is such a big component of the manufacturing process.

There could also be an increase in the price of yoghurts, although this is harder to estimate because they have a much bigger range of cost in inputs such as raspberries and apricots which have also gone up in a value.

And while four pints of milk at Aldi is still at £1.15 – well below the average of £1.30 seen at most other supermarkets – experts say the supermarket is likely to be increasing the prices of other products to make up for the loss it is facing on milk.

Michael Oakes, the dairy board chair of the National Farmers’ Union, told the Daily Telegraph: ‘I was paying about £7,000 for an artic [articulated lorry] load of fertiliser, and this year it’s £28,000.

‘It would have been a little bit less before Ukraine happened, but it made another big jump because we’d already seen higher gas prices, which have implications for fertiliser costs.’

UK dairy bosses have raised concerns over their costs to the Government but the Department for Environment, Food and Rural Affairs (Defra) is said to be only in ‘listening mode’. 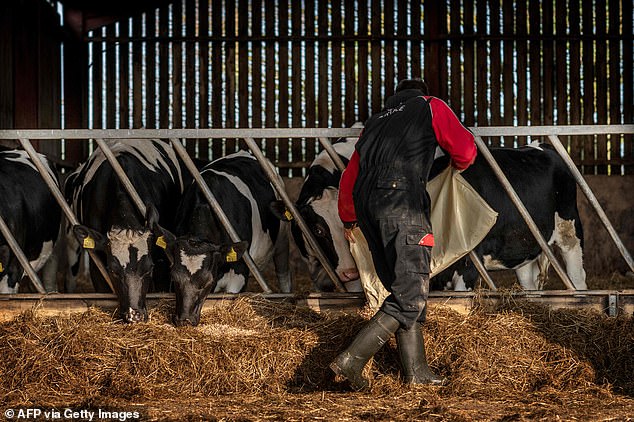 A dairy farmer tends to his herd in Devon on March 25. Industry bosses fear that surging costs from feed, fertiliser and fuel will cause an increase in prices not seen in decades

The industry body warned that customers were likely to see shortages without urgent action.

It predicted 10 per cent to 15 per cent of farmers could leave the industry, with many on the brink of bankruptcy due to the unprecedented rises in the cost of production.

It said farmers were losing money on every egg they produced due to feed cost increases, exacerbated by the war in Ukraine, which had added 25p to 30p per dozen. 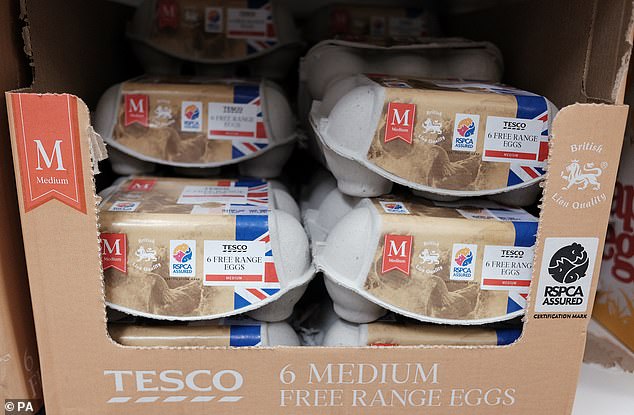 Yesterday, Transport Secretary Grant Shapps said Chancellor Rishi Sunak will always be looking at what else he can do to support people, amid criticism of the Government’s handling of the cost-of-living crisis.

Mr Shapps insisted Mr Sunak has ‘already provided billions and billions of pounds to try to relieve the pressure’.

But Labour leader Sir Keir Starmer has lambasted the Government for what he claims are ‘pathetic’ attempts to ease the burden on people struggling with rising bills.

That sentiment was echoed by shadow business secretary Jonathan Reynolds, who said yesterday he is ‘angry’ at the scale of the crisis, arguing that ministers have not done enough to tackle the problem.