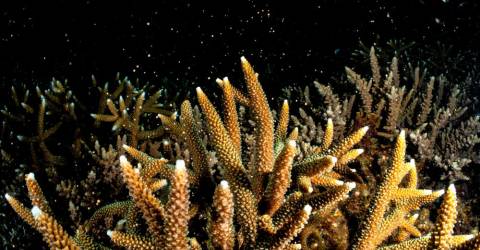 KUALA NERUS: Universiti Malaysia Terengganu (UMT) continues to achieve excellence in the field of marine science after a team of its researchers succeeded in releasing 600,000 coral seeds in the waters of Pulau Bidong recently.

He said similar efforts were also being carried out by researchers in other parts of the world such as the Great Barrier Reef in Australia and the island of Curacao in the Caribbean Sea.

“Coral seeding requires a mature parent coral that is ready to lay eggs. The parent coral is then taken out of the sea for ex-situ fertilisation. The seeding process of three parent corals of the acropora gemmifera species has successfully produced 600,000 coral seeds. The five-day process was carried out in Pulau Bidong.

“As the process is energy-consuming and involves high costs, support from volunteers as well as any party that is willing to provide funds is very much needed for this effort to be carried out continuously and on a larger scale throughout Malaysia,” he told Bernama, here today.

Tan hoped that the success would serve as a catalyst for coral reef recovery in the future as the survival rate of naturally produced coral larvae was very low.

“The large-scale coral spawning process occurs twice a year, namely from March to April and September till October. When the phenomenon occurs, millions of eggs are simultaneously released by various species of corals.

“However, the eggs’ survival rate is very low as they will be eaten by fish or drifted to the shore before reaching the final stages of the metamorphosis process,” he said.

Metamorphosis is a process that involves the change of physical structure from a caterpillar-shaped larva, to becoming the same shape as an adult coral and a new parent.

Tan hoped that the seeding effort would help restore the coral population in the country’s waters.-Bernama