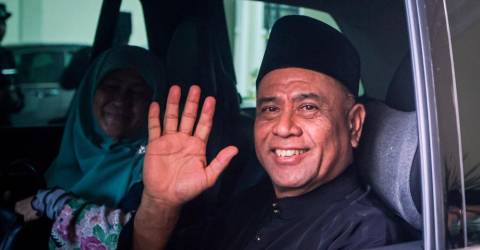 The Kota Tampan state assemblyman said under the BN-PH cooperation, BN would also be given three state executive councillor posts and the post of State Assembly Speaker.

“This role (as Menteri Besar) is suitable for me. I accepted it (offer) as I’m the one who initiated Perak Sejahtera 2030 and I want to continue leading it.

“At 3 am on the night of (GE15) results, Perak Bersatu secretary Datuk Zainol Fadzi Paharudin visited me but could not make any decision as his mandate was only to arrange a meeting between me and state Perikatan Nasional (PN) chairman Datuk Seri Ahmad Faizal Azumu.

“The three of us met later and I informed them of the PH offer (Menteri Besar post). So, PN was free to make its offer to me but until yesterday they did not offer anything,” he told a news conference after being sworn in for a second term as the 14th Menteri Besar at Istana Iskandariah here today.

Saarani said the state needed to have a strong and stable government and could not afford to remain in a state of uncertainty, especially when the State Assembly needed to convene fast to pass the state budget.

The Perak BN chairman said BN decided to form a unity government for the sake of peace and stability and to ensure the people’s well-being.

“Both parties have also agreed in principle that the formation of this government must be based on our mutual commitment to uphold the sanctity and sovereignty of the state and federal constitutions,” he said.

Saarani, who is Perak Umno chairman, said the swearing-in ceremony for the new state executive council would be held at Istana Iskandariah at 11.30 am tomorrow.

No single party or coalition obtained a simple majority in the Perak state election, with PN winning 26 seats, BN (24) and PH (nine) in the 59-member State Assembly.-Bernama