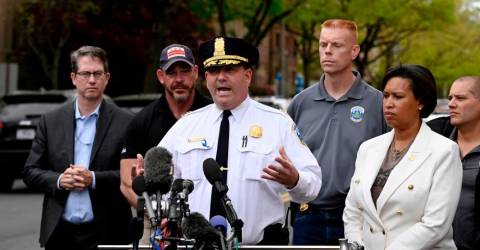 WASHINGTON: Three people were wounded on Friday after a gunman opened fire with an automatic weapon in an upscale neighborhood of the US capital, police said.

The Connecticut Avenue-Van Ness neighborhood of Washington was on lockdown after the mid-afternoon shooting and residents were evacuated as police hunted for the gunman.

Assistant police chief Stuart Emerman said three people had been taken to hospital — two adults who were in critical but stable condition and a girl with a minor gunshot wound.

Emerman told reporters police did not have any suspects in custody and were conducting a search of homes and apartment buildings in the area.

“We do not have a motive at this time,“ Emerman said. “We’ve locked down the neighborhood.”

Neighborhood residents could be seen being evacuated by police, who swarmed the area with dozens of heavily-armed officers.

A number of ambulances were also on the scene.

Social media videos appeared to record lengthy bursts of automatic gunfire near a secondary school and a university in the neighborhood, which also houses a number of embassies.

Police were seen pointing weapons upward at an apartment building as they escorted residents from the area where the shooting occurred.

The University of the District of Columbia, across the street from the location of the shooting, went into lockdown.

“Active shooting incident near student housing located on Van Ness Street/Connecticut Avenue NW. The suspect remains on the loose,“ the school said in a tweeted statement.

“Law enforcement is on the scene. Take shelter and stay in place until further notice.”-AFP