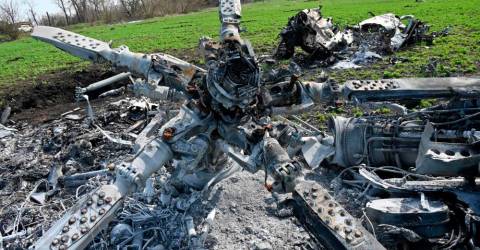 WASHINGTON: The US Treasury Department announced Wednesday the transfer of $1.3 billion in economic aid to Ukraine as part of the initial $7.5 billion promised to Kyiv by the Biden administration in May.

“With this delivery of economic assistance, we reaffirm our resolute commitment to the people of Ukraine as they defend themselves against Putin’s war of aggression and work to sustain their economy,“ Treasury Secretary Janet Yellen said in a statement.

The payment, part of the $7.5 billion aid package signed by President Joe Biden in May, is set to be made through the World Bank.

According World Bank estimates, the war, which began with Russia’s invasion of its former Soviet neighbor in February, could cause the Ukrainian economy to contract by up to 45 percent in 2022.

The country is currently running a budget deficit that is growing by $5 billion every month, exacerbated by its inability to raise funds or to access financing on external markets.

Allies have rushed to pump Ukraine with aid, with the G7 and the European Union also announcing commitments of $29.6 billion in further money for Kyiv, with $8.5 billion of that coming from the United States, according to the Treasury Department.

Washington already disbursed two payments of $500 million of that through the World Bank in April and May to help cover Ukraine’s immediate costs as it dealt with “Russia’s unprovoked and unjustified invasion,“ the Treasury said.

Washington has already supplied Kyiv with more than $6 billion in military equipment since Russia’s invasion.-AFP