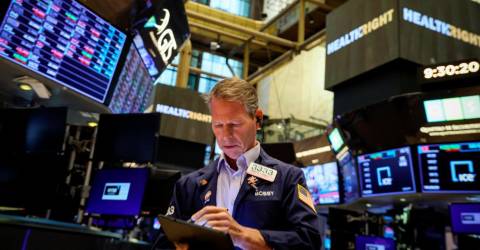 The S&P 500 recovered from session lows that put it down 1% at the lowest in a month, but the benchmark index still notched its biggest two-day percentage decline in 2½ months.

Peter Cardillo of Spartan Capital said the market actually held up pretty well given the nerves over Powell’s hawkish comments.

He called Friday’s losses “overexaggerated, because the Fed said nothing new”, but cautioned that “we still are not out the woods”.

“Friday’s selloff was frankly overdone, I know (Powell) said he was going to play tough with inflation but it is honestly not that much different than what he has been saying for the last several weeks, he was a little more hawkish but I mean, geez, who is surprised by that, really?” said Randy Frederick, vice president of trading and derivatives for Charles Schwab in Austin, Texas.

“I don’t see a whole lot of up or downside here in the near term, I see a lot of volatility and that is probably going to be the case at the very least until we get past the September 21 rate hike.”

Powell warned of “pain” ahead for Americans in the battle against inflation, and doused any hopes the central bank would lower interest rates any time soon.

There was little news on Monday to sway markets one way or the other as a new week began.

Twitter shares lost 1%, after news that the company’s erstwhile suitor, billionaire Elon Musk, has subpoenaed a Twitter whistleblower to share information about spam accounts at the social network.

Megacap technology and growth stocks such as Apple Inc , off 1.37%, and Microsoft Corp, down 1.07% were among the biggest drags as Treasury yields rose. – AFP, Reuters