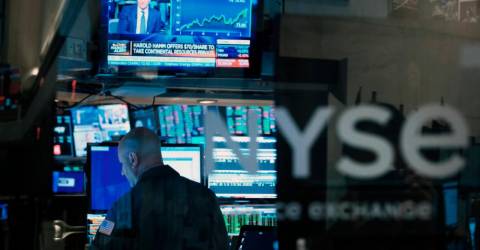 Major indices had opened with modest gains but weakened thereafter as investors pondered the likelihood that the Fed would announce a 0.75-percentage-point interest rate increase today instead of the telegraphed 0.5-percentage-point rise.

Futures markets are currently betting on the bigger increase.

“It looks like it’s going to be a 75 basis point hike,” said Quincy Krosby, chief equity strategist of LPL Financial. “We haven’t seen any sign that the Fed wanted to clarify this expectation. In fact, if the Fed stayed with a 50 basis point hike, the market could be disappointed.”

Stocks sank on Friday and Monday following a grim consumer price report that undermined hopes that inflation was peaking.

Yesterday, the Labor Department showed wholesale prices jumped 0.8% in May compared with April, double the increase in the prior month.

Krosby said the Fed’s sharp increase in lending rates will dampen economic growth but that the central bank has little choice at this point.

“The wake-up call was the CPI on Friday and the preliminary consumer confidence,” she said. “The Fed got the message. It needs to maintain its credibility.”

Among individual companies, Continental Resources surged 15.1% after founder Harold Hamm and his family offered to buy publicly traded shares and take the shale producer private in a US$25 billion (RM110.5 billion) deal.

FedEx soared 14.4% as it announced a 53% jump in its investor dividend and named two new board members following an agreement with activist fund DE Shaw. – AFP