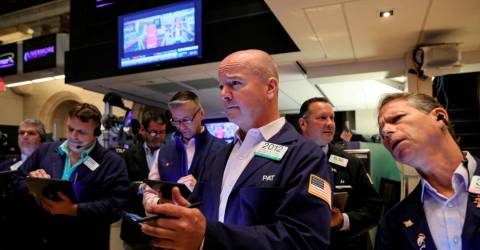 All 11 S&P 500 sector indices declined, led lower by consumer discretionary, down 2.84%, followed by a 2.78% loss in information technology.

Nvidia Corp dropped 4.6% and Amazon.com Inc fell 3.6%, while Microsoft Corp and Apple Inc each lost more than 2% as the benchmark 10-year U.S. Treasury yield rose to its highest since July 21.

Powell is due to appear at this week’s annual gathering of central bankers in Jackson Hole, Wyoming, and expected to reiterate the message that the Fed is not yet ready to end the steep rate hikes needed to quell the surge in inflation, despite some signs of progress.

“Powell is going to try to sound hawkish to tamp down inflationary expectations and tighten financial conditions. So that’s most likely going to be a negative catalyst for the market,“ warned Jay Hatfield, chief investment officer at Infrastructure Capital Management in New York.

Markets bounced higher in recent weeks as investors seized on signs of a slowing economy, and slight easing of price pressures to send share prices higher.

But Ross Mayfield at Baird said that rally was “was probably a little premature”.

“Really, nothing in the macro story had changed all that much. The Fed was still signaling rate hikes,” he told AFP.

The week will also bring some key data reports, including the Fed’s favoured inflation report, as well as consumer confidence, sales of big-ticket goods, new home sales and an updated read on second quarter gross domestic product, which fell 0.9%.

Andy Kapyrin of Regent Atlantic said the sell-off reflected “a little bit of profit taking in response to what is likely to be a pretty risky week for stocks and bonds”. – AFP, Reuters