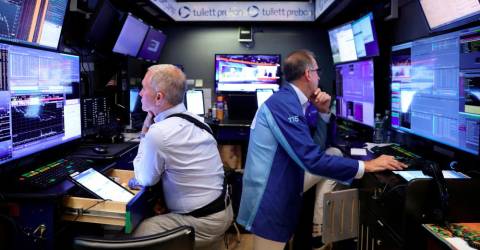 NEW YORK: Wall Street stocks finished modestly higher on Wednesday (Sept 14), regaining some of the ground lost in the prior session, though with the impact of disappointing US inflation data still reverberating through the markets.

All three indices wavered throughout the day, but ultimately ended in positive territory. They all failed to meaningfully recover ground lost in Tuesday’s carnage, which wrought their largest percentage plunges in more than two years.

The consumer price index report on Tuesday showed widespread inflation pressures, even though the annual CPI pace slowed in August.

That drove steep losses in equities, and data on Wednesday showing only a modest slowing in the producer price index due to falling energy costs did little to ease immediate concerns.

The disappointing inflation data has left investors bracing for the Federal Reserve to continue its tough anti-inflation fight with another massive interest rate hike next week.

Among individual companies, Starbucks closed up 5.5% after announcing plans to enhance its US stores and upgraded its revenue and profit outlook over the next three years.

Meanwhile Union Pacific dropped 3.7% as a major strike by US freight railroad workers loomed this weekend, with negotiations ongoing.

Advancing issues outnumbered declining ones on the NYSE by a 1.05-to-1 ratio; on Nasdaq, a 1.06-to-1 ratio favored decliners. – AFP, Reuters