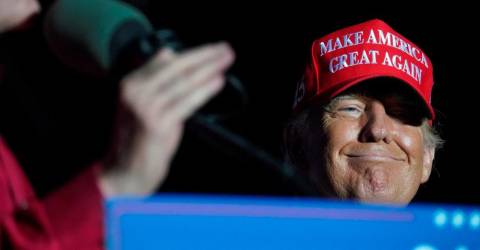 WASHINGTON: Donald Trump (pix), who has been fighting for years to keep his tax returns confidential, won yet another reprieve from the US Supreme Court on Tuesday.

A Democratic-led committee of the House of Representatives has for the past three years demanded all tax returns from Trump and his related business entities for the period of 2015 until 2020.

But, unlike presidents since the 1970s, Trump has refused to release his tax returns and fought fiercely in the courts to block the congressional request.

After numerous episodes, a federal appeals court last week finally allowed the IRS to turn over the documents to the committee, paving the way for that to happen before the November 8 midterm elections.

The real estate tycoon then filed a final emergency appeal to the US Supreme Court.

In accordance with its practice, the Court suspended the transfer on Tuesday until it has the information it needs to rule on the merits. It asked the committee to provide its arguments by November 10 and should render its decision shortly afterwards.

Although the high court has been thoroughly overhauled by Trump, its justices have never ruled in his favor in this area, notably authorizing in 2020 the transfer of his tax records and business documents to the Manhattan district attorney’s office that is investigating his affairs.

Prior to his 2016 presidential election triumph, Trump often boasted that he was “really rich.” Since then, his lack of transparency has fueled speculation about the extent of his wealth or potential conflicts of interest.-AFP