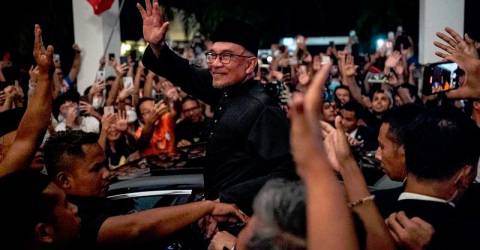 SHAH ALAM: Popular local religious preacher Datin Aminah Zakaria, a longtime acquaintance of Datuk Seri Anwar Ibrahim, has characterised Malaysia’s 10th prime minister as a charismatic and wise man who is capable of holding the highest position in the country.

Aminah or better known as Ustazah Aminah, 77, said her friendship with Anwar, 75, began in the 1970s during the Angkatan Belia Islam Malaysia (ABIM) annual general meeting in Kelantan when he held the position of secretary.

The widow of Federal Territories Mufti Datuk Md Hashim Yahya said ever since then, she had followed Anwar’s journey and its related developments.

“I could feel how far his sincerity, wisdom and charisma extended. I thought that he would surely become a leader of distinction some day,” she said when met by Bernama at her residence here.

She said every time she met Anwar at a function, he would definitely seek her advice and views.

“I would also advise him through calls and ‘WhatsApp’ if I heard or watched him using improper words during talks or events,” she said.

Aminah also shared that Anwar was a man who loved knowledge and loved to read various books relating to politics, religion, society and economy, which inevitably led to his being selected as Asia’s Best Finance Minister in 1996.

She expressed hope that Anwar would carry out his prime ministerial duties with dedication, responsibly and also focus on those under his leadership.

“I said, wherever you go, take Allah with you, always remember Allah in any situation and Allah will help. Never be afraid, so long as you haven’t forgotten Him.

“To my younger brother Anwar, I wish you the best in carrying out the duties bestowed by Allah, who has been chosen by Allah to lead Malaysians, especially in governing our beloved country,” she added. – Bernama