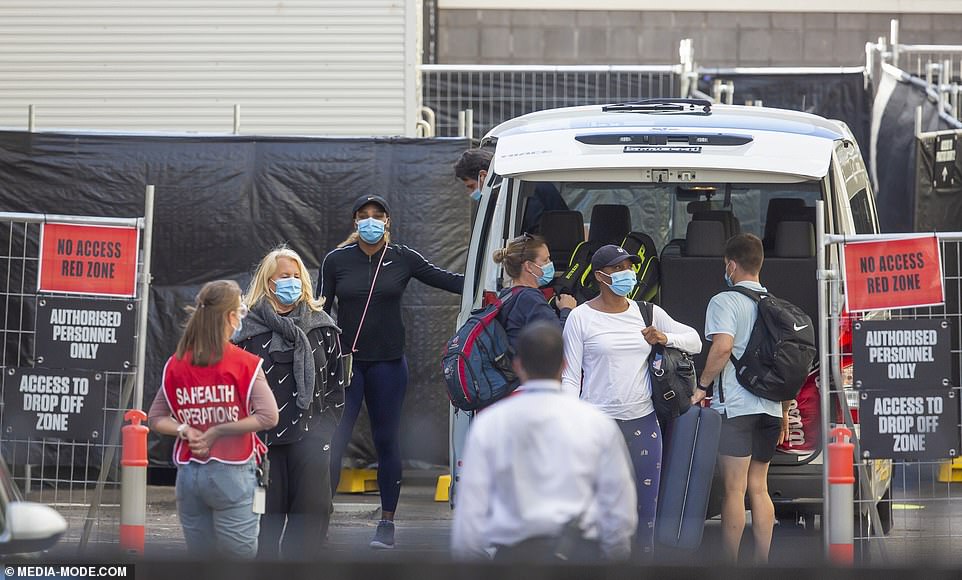 Tennis champions Venus and Serena Williams have been spotted arriving at training in Adelaide ahead of the Australian Open.

The superstar sisters were driven by mini bus to the tennis training centre on Monday afternoon alongside Serena’s coach Patrick Mouratoglou.

Along with their fitness attire, the former world No. 1s and Mouratoglou wore face masks, in line with South Australia‘s Covid-19 health mandates for players allowed out of quarantine to practice.

The area was signposted as a ‘no access red zone’, with state health officials and police guarding the drop off area as the tennis stars arrived. 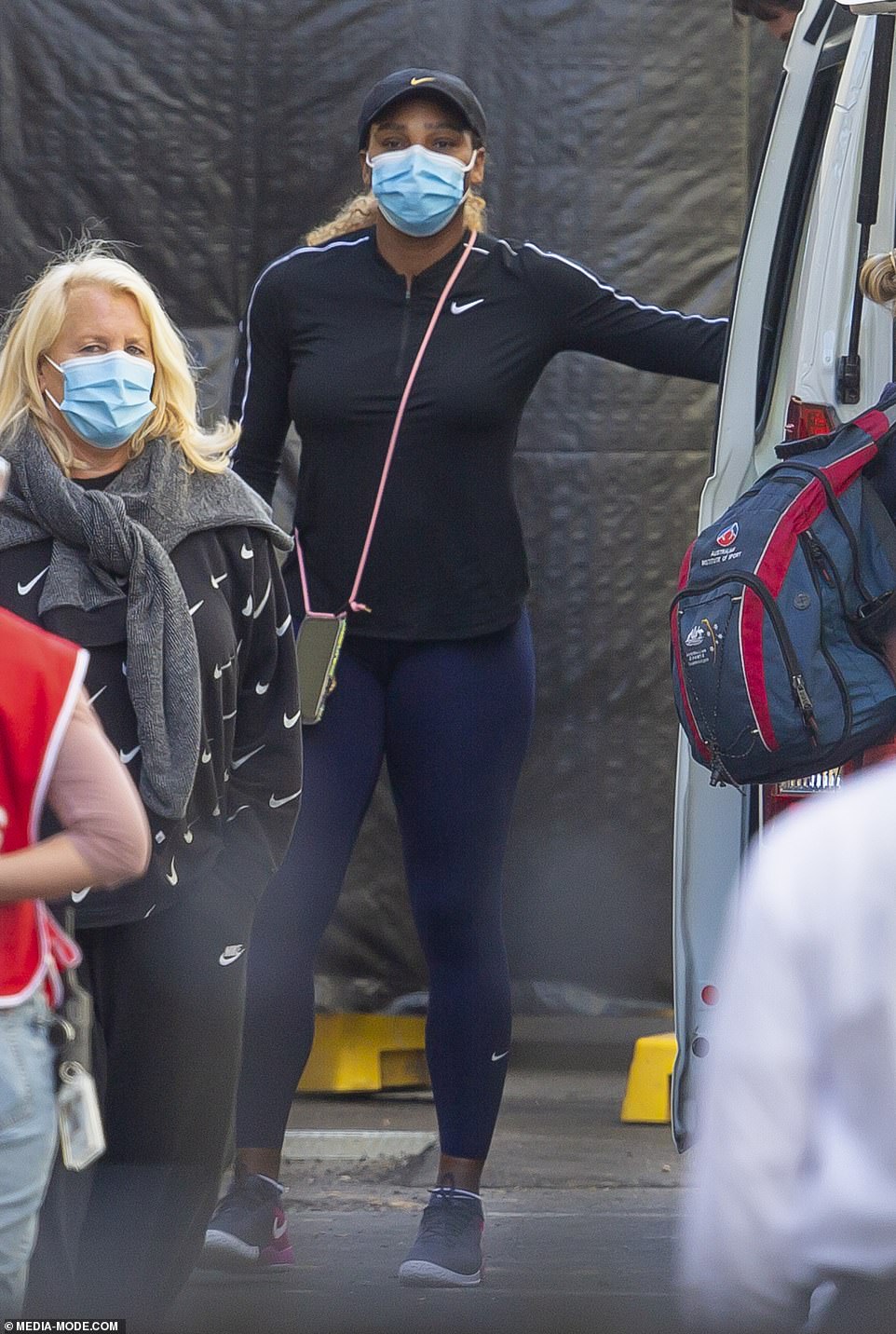 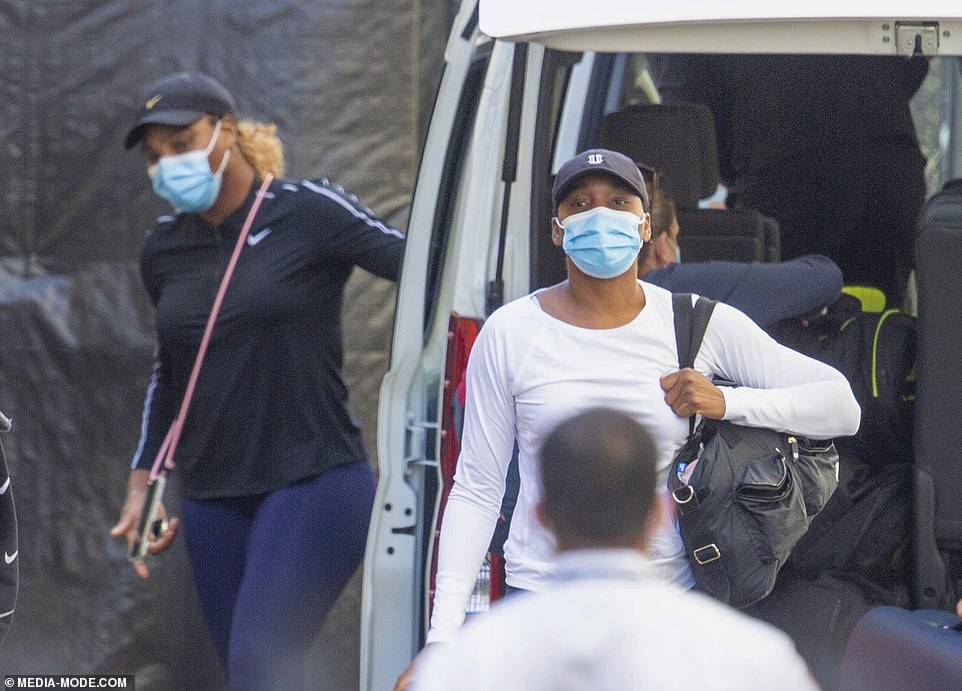 The sporting sisters were conveyed to the tennis centre on Monday afternoon via a white mini bus, which also appeared to be carrying other tennis enthusiasts

Venus walked ahead of her companions, toting a sports bag as she headed into the facility to begin preparation for the February 8 tournament and an exhibition competition before it.

Her younger sister stayed behind to wait for her coach as he unloaded racquets and other equipment from the white van.

The pair could be seen exchanging words as Mouratoglou loaded bags on to his shoulder, before walking past police officers guarding the gate to enter the centre.

The grand slam tournament is in crisis three weeks before the first ball is served with 72 tennis stars isolating in hotel rooms for 14 days and unable to practice.

Five passengers across three charter flights into Melbourne carrying players, support staff and broadcast crews have now tested positive to the virus in the past week.

The infected passengers, including a flight attendant, the coach of Canadian tennis star Bianca Andreescu and a member of a broadcast crew, all tested negative before their flights.

Due to Australia’s strict Covid protocols, the affected players will now be confined to their hotel rooms for the next 14 days, despite initially being told they would be able to leave for five hours a day to train. 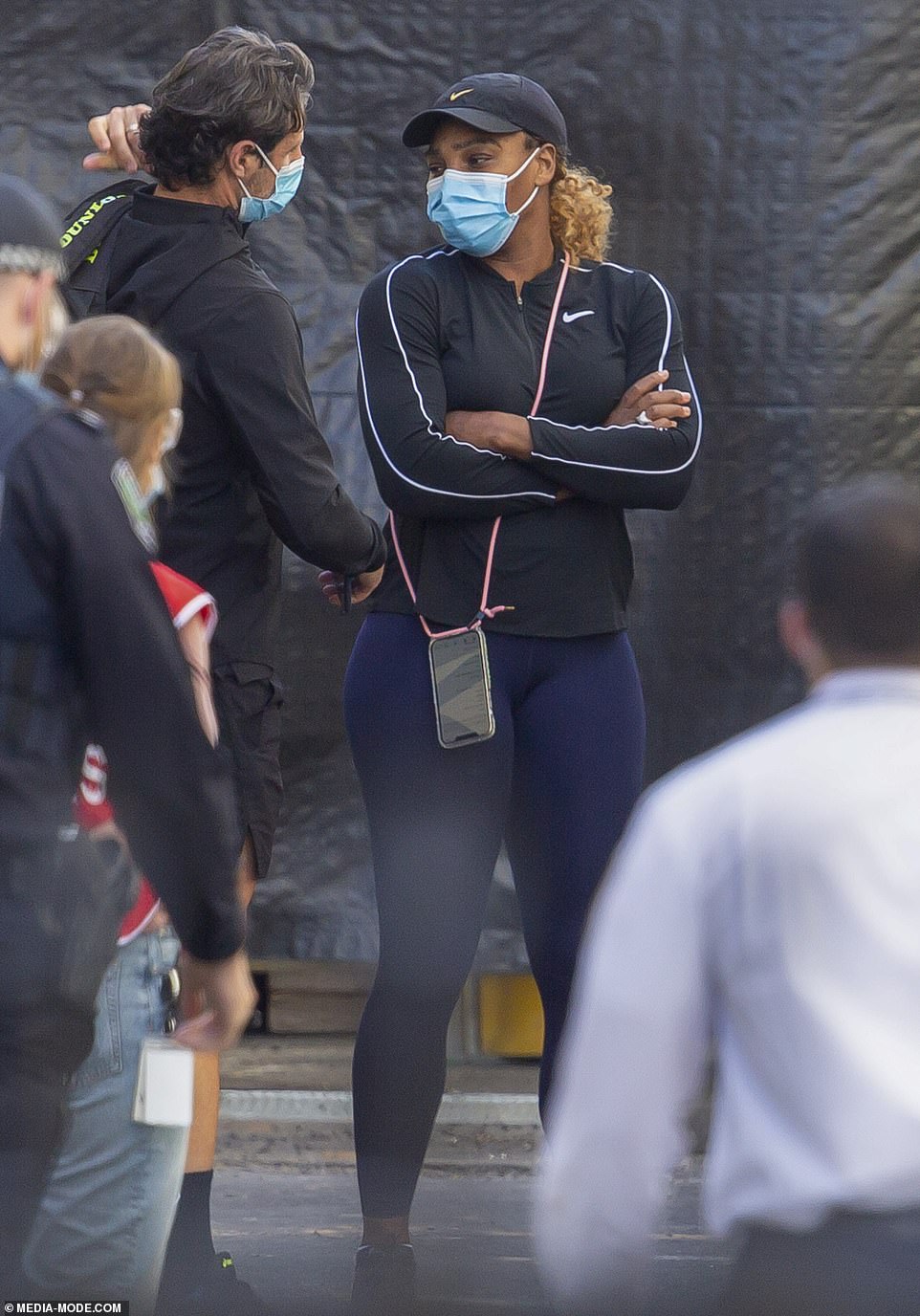 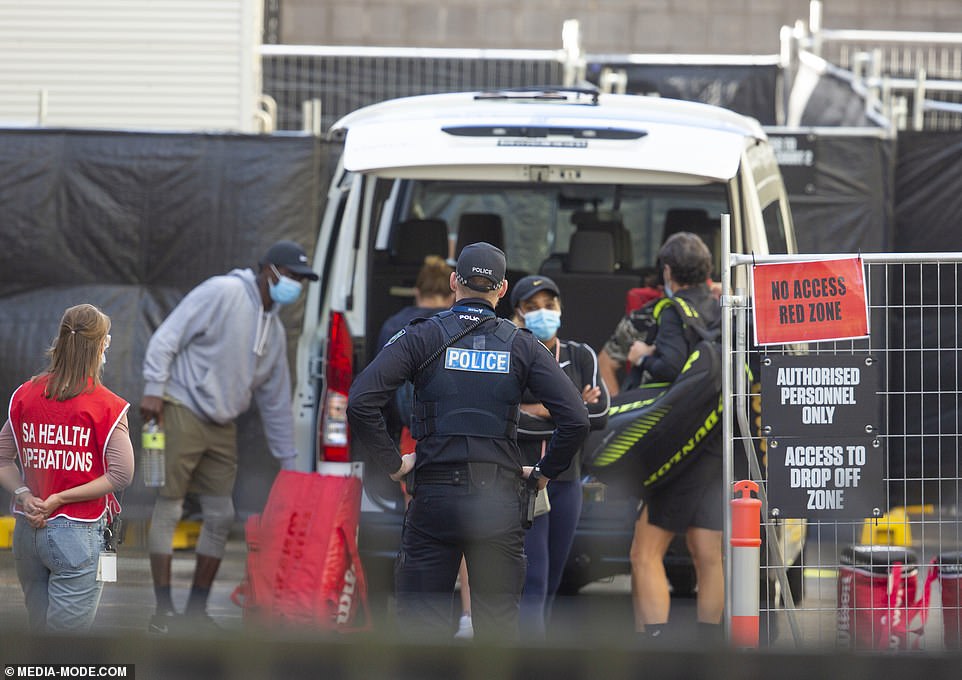 He said they would consider adjusting the schedule for the lead-in ATP and WTA tournaments which are due to start in Melbourne on January 31 and February 1.

All international players were originally given an exemption to train for up to five hours a day, however, the test results forced the two flights affected into stricter quarantine under Victorian government orders, prompting complaints of unfair advantage for the others.

However, Premier Steven Marshall has warned tennis stars and support staff currently quarantining in Adelaide will be subject to South Australia’s strict coronavirus measures should any test positive ahead of an event later this month.

The Williams sisters, and other world leading players, including Novak Djokovic, Rafael Nadal, and Naomi Osaka, flew into Adelaide last week ahead of a one-day exhibition tournament at Memorial Drive on January 29.

They are all in hotel quarantine and have special arrangements in place to allow them to train over the next two weeks.

Premier Steven Marshall says there’s no suggestion any of the players or their support crews have tested positive at this stage. 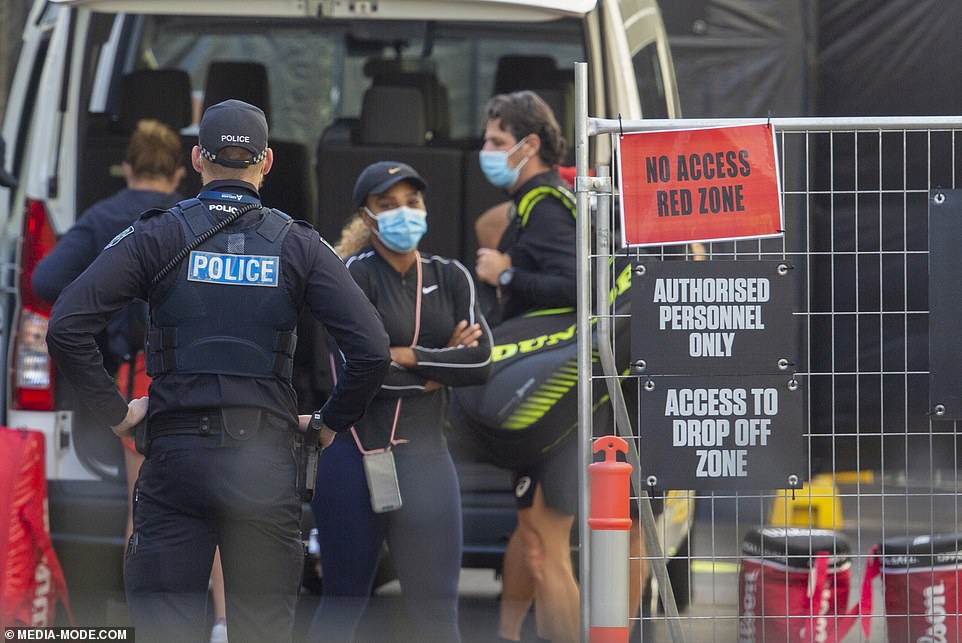 Police officers and state health officials could be seen guarding the drop off zone, which was sign posted at a ‘no access red zone’

But he said if they do, they will be moved to Adelaide’s dedicated Covid-19 facility along with other active infections.

‘There is very tight scrutiny around the people who have come into South Australia,’ Mr Marshall said on Sunday.

‘We have very strict protocols in place in regard to anybody infected with the coronavirus.

‘The reality is, it would be impossible for somebody who has contracted this disease to be out and about in public.

‘We would have to have them very securely supervised, there would be no more training for them.’

Australia’s international borders have been closed since March 20 with only citizens and permanent residents allowed in unless they have exemptions – as the tennis players do. 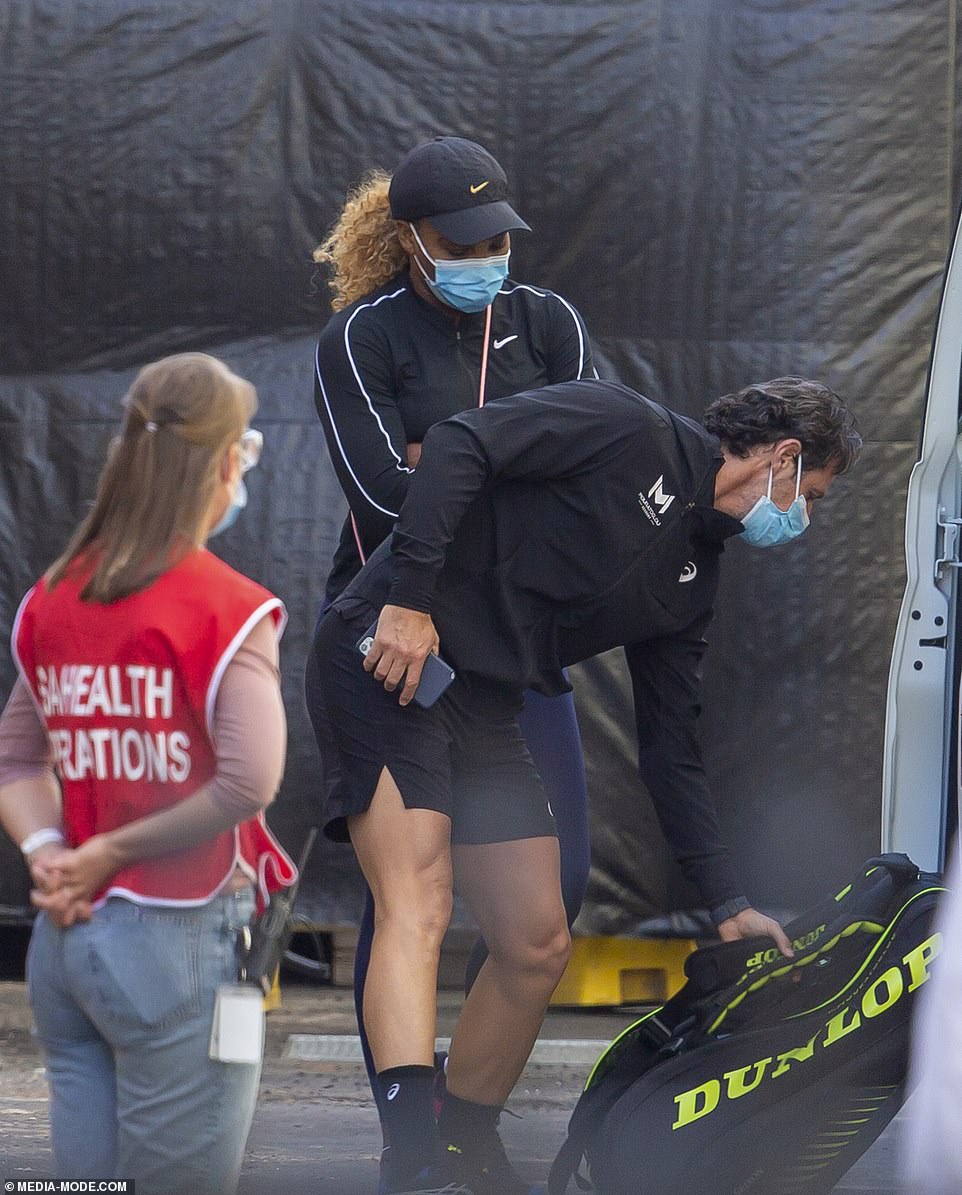 Everyone at the site, including the tennis stars, appeared to be wearing face masks in line with the South Australian government’s health recommendations

All entrants must enter 14 days of mandatory hotel quarantine, with Covid tests on day two and 11, but players can train for five hours a day in that time.

However, stars from around the world were robbed of any real chance of success at the Australian Open after positive Covid tests on three charter flights into Melbourne.

Instead of practicing on court for five hours a day like their competitors, players such as Angelique Kerber and Kei Nishikori cannot leave their rooms.

Veteran Uruguayan player Pablo Cuevas filmed himself hitting a tennis ball against a mattress pressed against his hotel wall in a desperate bid to keep his touch.

Spaniard Carreno Busta has been left horrified by inedible food and forbidden to order takeaway, while Kazakhstan number one Yulia Putintseva found a mouse scampering around her room.

Djokovic, who flew is not subject to the same hard quarantine, has reportedly called on Tennis Australia boss Craig Tiley to fulfil a list of requests. 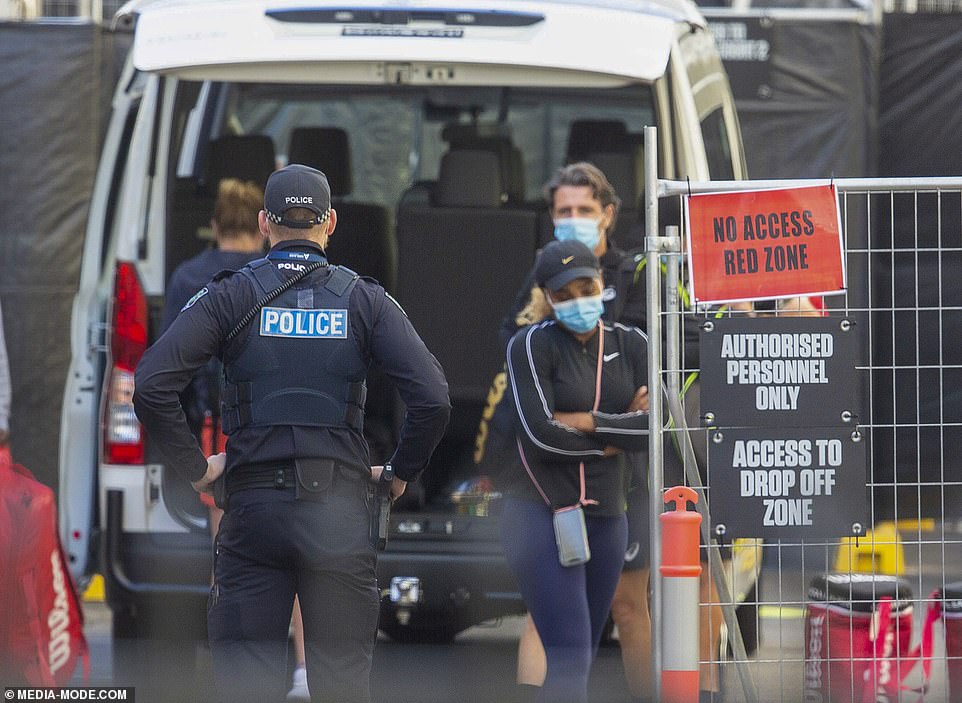 After Mouratoglou collected his bags, Serena and the coach proceeded to make their way into the facility

COVID-19 Quarantine Victoria Commissioner Emma Cassar said that there had been cases of ‘challenging behaviour’ from some confined players and support staff, with some players taking to social media to express outrage over the quarantine rules.

Cassar warned they could be fined up to $20,000 or repeat offenders transferred to the complex care hotel where they have a police officer stationed outside their door.

Tiley said the recent threat of the UK strain of the virus had changed the situation but insisted players knew there was a risk of isolation.

The players are getting little sympathy from many Australians, with thousands of compatriots unable to travel home while many Victorians are currently locked out of the state.

The players will pocket a minimum $100,000 if they take part on the Australian Open main draw.

Time is running out and more players are still to arrive who could also be thrown into hard quarantine and all but eliminated before round 1. 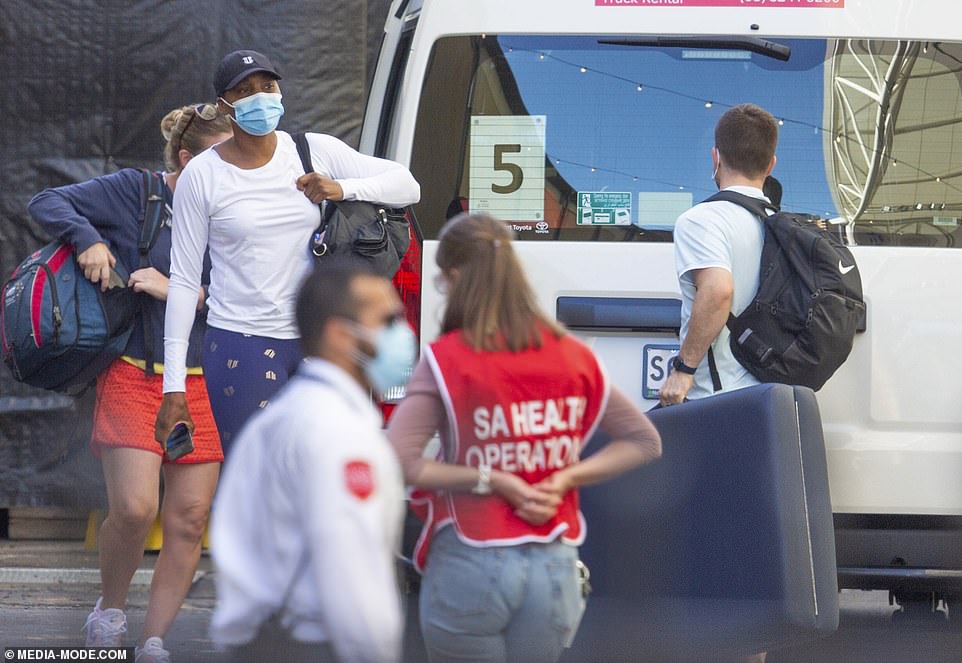 Victorian Premier Daniel Andrews was repeatedly warned in November by tennis officials and star players this would happen when he dithered about player arrival dates.

As late as early December it wasn’t clear whether the tournament would even go ahead, and then it was pushed back by three weeks and procrastination continued.

The latest plane affected was a Qatar Airways flight from Doha on Saturday morning where one passenger was infected – ruining another 25 players’ Grand Slam preparation including an Australian.

The Victorian government is facing mounting criticism over its decision to fly in 1,200 international players and officials for the tournament last-minute.

The infections threaten to derail plans to start the Open on time after Mr Andrews pushed back the tournament by three weeks.

From political criticism to fiery tirades from cooped-up players, tournament and state government officials are facing a race against time to make the open’s planned February 8 start date.

Tournament organisers are facing growing defiance from the 72 players who can longer go outside and train for five hours a day as previously agreed.